Just kidding I wasn't on peyote or any other mind-altering substance while performing at my and Kat's club today. It felt that way from time to time, due to a combination of a minor head injury before my shoe and foggy weather throughout the day. But despite a smallish crowd, it was a good time and I'm glad we scheduled the show!

Thanks to the terrific folks who came by and supported my show!
Eric Coiffard, Triana Caldera, mikial Bazno, nowayout4u Loon, and my darling Kat Claxton.
Posted by Zak Claxton at 1:48 PM 0 comments

Hey, if you're in world Saturday at noon, drop into my and Kat's place. I'm going to play a show there... something I tend to do only a few times a year. Should be fun! Come one, come all. :)

A wise man once said, "It's good to be back," and he was right; it is a good feeling to return to a place you've missed. Over the last year, I've spent nearly every Monday evening doing my show at Crystal Sands. In terms of music performance, it's definitely become my home base in SL. After my show there on August 25, I knew I'd be missing the following week due to my RL move to a new home, as well as Labor Day. I thought I'd be back there on 9/8, but my former ISP (EarthLink) let me down in a big way. By the time I decided to abandon them and move over to Verizon FiOS, it was still another week before I could get scheduled for installation, which killed my 9/15 show there as well.

So, by the time I got onstage there on Monday 9/22, it had been three weeks, which is the longest I've been away from Crystal Sands since I started playing in SL. I really missed it! To commemorate my return, I pulled out three songs I'd never done before in SL, including a couple I learned just for the occasion. As usual at Crystal Sands, it was a fun show, with a fun crowd. Now all we need to do is get Kat's Internet connection rocking, and life will be perfect!

One musical note (ha ha! sorry)... not that this was planned, but with the song selection and the mood I was in, this was a very countryfied show! If you'd told me I would have anything to do with country music awhile ago, I'd have laughed in your face. You never know what kind of music will float your boat at any given time, but this is what came together yesterday, and it worked out fine. Yee haw!

Thanks to all the cool people who helped support my show!
Elizabeth Antonelli, EvaMoon Ember, Triana Caldera, Rykk Ferraris, Robie Bloch, and the lovely Sandi Benelli!
Posted by Zak Claxton at 7:13 AM 1 comments 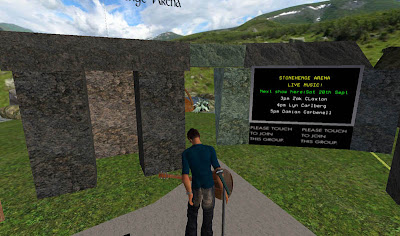 I really did not think I was going to make it back to SL and play a show until Monday, when I'll be at Crystal Sands. However, my FiOS installer did a good job and everything was up and running about an hour before I was scheduled to play at Stonehenge. So, after a quick test to make sure my stuff was actually working, I played my first SL show in three weeks! Whew, feels great to be back.

So, as your probably know if you've read earlier blogs here, I've just moved to a new home and this was my first SL show form the new place. Another cool thing about today's show: my darling Kat has just made her move down to my hometown, and she was able to sit here in the room with me while I played my show, something she's only done once before. So I was having a great time, and I think my crowd at Stonehenge enjoyed it as well.

Thanks to the following folks who helped support my show!
Sandy Beachey, Sally Silvera, Doubledown Tandino, Flowerdew Zagoskin, Elphaba Broome, and most of all Lyn Carlberg and Tessira Soderstrom!
Posted by Zak Claxton at 7:30 PM 0 comments 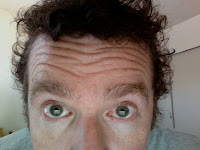 Ah yes. My friendly FiOS installer will arrive tomorrow morning between 7-9AM, and sometime in the following 4-6 hours, I will be all hooked up again. Have I mentioned I've missed SL? I have, I have.
Posted by Zak Claxton at 5:10 PM 1 comments

Woe is Me; No ISP 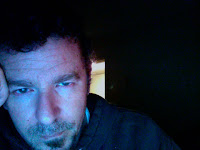 Howdy folks! Here's a rare post on the ZakBlog in that it has nothing to do with any show I played, or with SL at all. Or does it?

My move 50 feet to the south went tremendously well. Been here for ten days, love the new place. Everything we needed to have transferred -- TV, phone, electricity, all that stuff -- came over fine. Oh, but with one small exception; my Internet. See, I'd spent about a decade under a particular service provider for my DSL line, but apparently the immense coordination needed to change my address from #D to #A on the same street was too much for them to handle. After days and days of cajoling, negotiating, being transferred into endless loops of phone trees and customer service people and tech support and installation specialists and level 2 technicians, along with a new modem and more, I still didn't ever get my DSL service restored at the new place.

So, after ten days of being on their outsourced phone support, I finally gave up, and contacted Verizon to come out and install a FiOS system in my new home. I ordered a pretty speedy up/downstream package, so when I do get up and running again, it should be smoking fast and cool. Of course, it'll be until Saturday 9/20 before fiber is gloriously running to my home, so that's yet another week of me being out of SL.

Therefore, my next certain show will be Monday 9/22, at my usual spot (Crystal Sands) at 5:00PM. See you there!

P.S. In case you're thinking to yourself, "Wait. He has no ISP. How is he updating his blog?" there's a very simple answer. And that answer, my friends, is that I've resorted to maliciously purloining the spare bandwidth of a trusting neighbor. I am a cad and a scoundrel. Can you now see the depths to which they've driven me? Can you?
Posted by Zak Claxton at 9:39 PM 1 comments

My very last show before I packed up my computers and music gear for my move was my debut at San Diego in SL, where I was all too happy to play at the request of my friend Cher Harrington. It was an 8:00 show, but we still had a really decent turnout made up of Zak fans and San Diego locals. Good times. 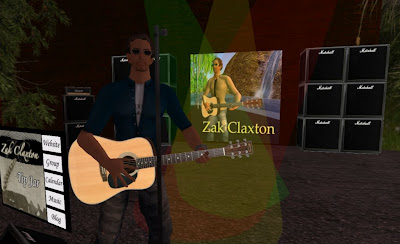 In the final weekend before my move to my new place, I had scheduled two shows in one day. And you know what? I was tempted to back out of one or both of them, and was glad that I didn't. Both were very fun.

My first show that day was my debut at Rastafairy Beach, the very mellow beach venue owned by hexx Triskaidekaphobia and jsmn Yao, and while we didn't draw much of a crowd, we did have fun. Never discount the value of fun! We're going to make this show a regular thing, every five weeks or so, and you should expect to hear more about good times from this fun place!

Thanks to everyone who supported my show!
Sally Silvera, Kat Claxton, Peregrin Destiny, Toby Lancaster, and of course hexx Triskaidekaphobia and jsmn Yao!
Posted by Zak Claxton at 7:32 PM 0 comments

Most of you know by now that I'm a supporter of musicians' rights to be paid for their efforts, but that doesn't mean I won't perform for "tips only" at a new or cool venue. After all, my real goal in playing gigs in SL, other than just having fun, is exposing my music to a bunch of different people. That's why it turned out to be a cool thing to play on a Thursday evening at The Falls.

Some of you may be thinking that in the middle of a move and a busy workweek, doing an SL show isn't high on the list of good ideas. Normally you might be right. But in this case, a) I'd made the commitment to play there before I even knew I'd be moving (same as my next couple of shows, as you'll see), and b) I really needed to de-stress myself, and playing live music is really good for that.

So, the Falls turned out to be a great show, and I was really glad I did it before getting back to moving 13 years of crap from my old place to my new place. Thanks to Gretchen Capalini for inviting me to play, thanks to my SL musician brothers and sisters who stopped by for the show, and special shout-out to my old RL friend Mick Malinow for getting back in SL after like a year of absence to hear me play!

And here's what I played: