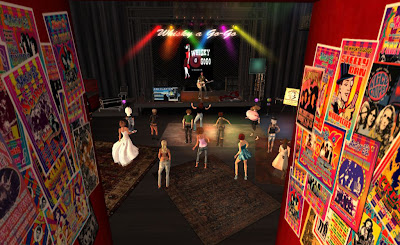 Today would have been Julia Child's 100th birthday. She almost made it; her death in 2004 happened two days before her 92nd birthday, despite the fact that her cooking recipes used tons of butter, fat, heavy cream and so on. Something to think about while you adhere to a strict diet.

Anyway, Julia and I share an outlook on life. She really felt that life was meant to be enjoyed, and that being cheerful should be the rule rather than the exception. She also seemed to be a person who enjoyed experiencing many different things -- another area that she and I have in common. For example, during WWII, that sweet and happy cooking lady was also a top-secret researcher working for the OSS, the government agency that preceded the CIA. Yeah, really. 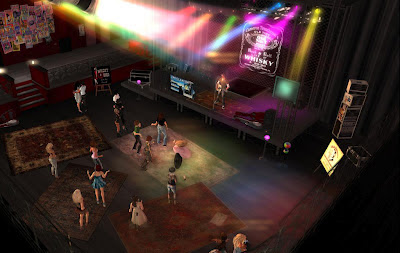 I like this top-down photo, courtesy of SuperZakster Triana Caldera.

So what does this have to do with my show last night at the Whisky A Go Go in Second Life? Well, much like a good meal, a good music show has a variety of flavors that complement each other. I've noticed that the great concerts I've seen, be they pop, jazz, hard rock, classical, or otherwise, take you through a range of feelings and emotions. While my shows are mostly known for their silliness and fun, there are always some moments where I'm being pretty serious in my song choices and performances. I can't tell you which portions of my shows are the appetizers, the main courses, or desserts, but I do try and serve up a balanced meal, so to speak, each time I get on stage. 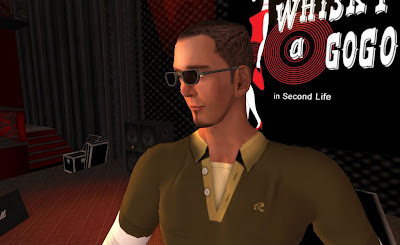 I usually am not too particular about having my avvie look like myself, but I so enjoyed having buzz-cut my hair last weekend that I did the same for my digital alter-ego. Photo by Kat. 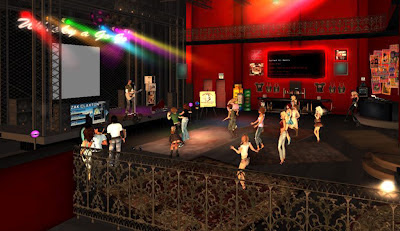 Yup. This is what a good show looks like. Photo by Kat.

I try and pull up some kind of theme for each show, usually something that's unplanned and happens rather randomly. Last night, I noted that nearly all the songs I'd pulled for my set had some really high vocal parts. The height of this phenomenon was focused on my doing a Rush song after hearing that DJ/Host Dmitri Polonsky was a fan. So, much of the banter between myself and the crowd had to do with my having to wear tight pants in order to hit those notes.

*Indicates the first time I've performed this song in SL.
†My only other performance of this Stealers Wheel song was together with Lyndon Heart awhile back, so this was the first time I did it on my own. Good stuff.

One more note on last night's show: Maximillion Kleene stopped by to hang out, and apparently enjoyed the vibe of the place, since he did an impromptu set there right after mine. Max is absolutely in the top tier of SL entertainers, and it's always a blast when we can hang out. In addition to his being a cool guy, I truly enjoy his music!

Big thanks to everyone who came out to the show... I'm really blessed to have connected with people who, for whatever reason, understand my silliness and add to the experience. Special thanks to those who helped support the show!
Triana Caldera, Alexis Fairlady, Maximillion Kleene, Selene Setsuko, Diana Renoir, Christine Haiku, Sassy Nitely, jsmn Yao, TheaDee, Cicadetta Stillwater, Sesh Kamachi, Crap Mariner, Kat Claxton, my manager Maali Beck, Whisky DJ/Host Dmitri Polonsky, and owner Cameron Trenchcoat!
Posted by Zak Claxton at 9:44 AM