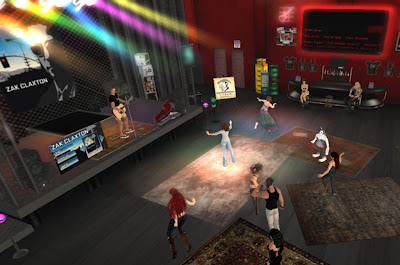 Today is Registration Day. That sounds like the name of a really cheesy movie, doesn't it? I can imagine the trailer as read by the late Don LaFontaine... "In a world where the school district does more than teach, you'd better have your forms filled out and checks signed... or be ready to face... the principal. Registration Day... don't be tardy."

Anyway, I just dropped my son and his mother off at the middle school he attends. The school actually has a pretty damn good system so that you take care of everything at once, and I mean everything. They set up a line, and as you go through, you drop off all the student info forms, health info forms, field trip permission slips, agreements about using computers and cell phones, PTSA membership forms, and so on. It ends with the school picture being taken. In between, they also happily accept a giant pile of cash or checks that covers all the crap a kid will need for the year (i.e., gym clothes, combinations locks, yearbook, and so on). The whole process takes about an hour, and then he'll be ready for school to actually start (which happens Tuesday of next week, by the way).

In any case, I'm glad that's done so I can tell you about my show last night at the Whisky A Go Go in Second Life. As I was looking through my giant pile of song lyrics, pulling some tunes out kind of randomly, I noted that several songs had some level of significance in my life beyond being something to which I could tap my foot and bob my head. For example, the Beatles' "A Day in the Life" was the very first song I ever played for my son after he was born. Jimi's "Little Wing" was a huge lesson for me as a young musician in emotive guitar playing and songwriting. So, that became my musical theme of the night, and it worked out nicely. 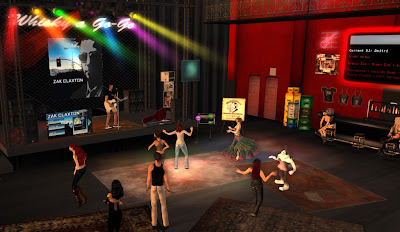 Another Tuesday night, rocking and laughing at the Whisky. Photo by Triana Caldera. Top photo by Kat. 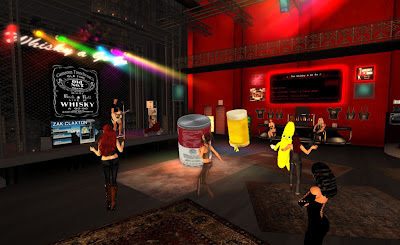 Somehow, much of my audience turned into food and drink. I'm not kidding when I say the Zaksters are silly, silly people. Photo by Kat.

I've enjoyed my weekly shows at the Whisky in SL, and I think the Zaksters are getting used to marking Tuesday nights on their calendars for my gigs there. A short note about last night's show: my voice was really behaving well, as was my guitar, so I'm happy about that. However, during my final song ("Tribute" by the mighty Tenacious D), I did a complete brain lock-up toward the end of the tune! We're talking about a song I've played live at least 150 times. So funny how that can happen; it's the musical equivalent of looking down at your shoelaces and wondering how to tie them. Despite that moment of sonic amnesia, it was a terrific and fun show, and I was happy that it seemed good for the Zaksters too.

†It's been over four years since I played either of these tunes. Not sure why; they're both good.