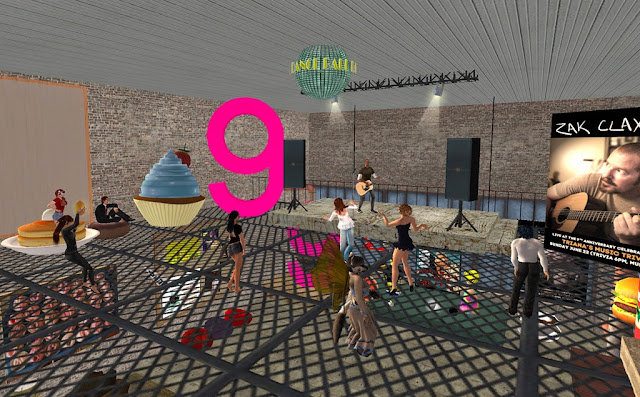 Last night, I had the pleasure of performing for my friends at Triana's Music Trivia for their 9-year SL anniversary, as well as Triana's personal 10-year rezday. My experience with Triana's Music Trivia is well documented. In fact, a number of years ago, I even wrote a song about it. The opening lines of "Triana" tell the tale just fine.

I remember when Kat and I were new
Looking 'round SL for something to do
But Sunday evenings would never be the same
After we found Triana’s Music Trivia game
Flashed the buzzer and made some friends
Crashed SL and logged again
Oh, the fun it never ends

So, literally, Kat and I were told about Second Life in 2006, and we checked it out and enjoyed it. Had some fun trying our first building and scripting adventures. Went to some live music shows, when we found artists we enjoyed. But just a couple of months in, we were already asking the now-typical question: what is there to do in SL? We might have even left the platform (as many others have done for similar reasons) if we hadn't connected with Triana and her weekly Sunday night music trivia game.

I feel a need to brag a bit for my friend Triana, since her polite Midwestern upbringing doesn't allow her to do it easily for herself. Triana's Music Trivia (TMT) is Second Life's longest continuously running trivia event. She does an incredibly good job coming up with topics week and week, year in, year out. As a musician who has to think through and prepare sets for each of my shows, I personally know that there's always more work putting together any kind of event than the people attending it see on the surface. Triana is one of those "get it done" kind of people, and she handles TMT so well that it's invariably a cool and enjoyable event. Every Sunday night at 7PM SLT, she prepares two different trivia topics for the crowd to choose from, promotes and hosts the entire event, and even handles the thankfully rare briefer with aplomb. 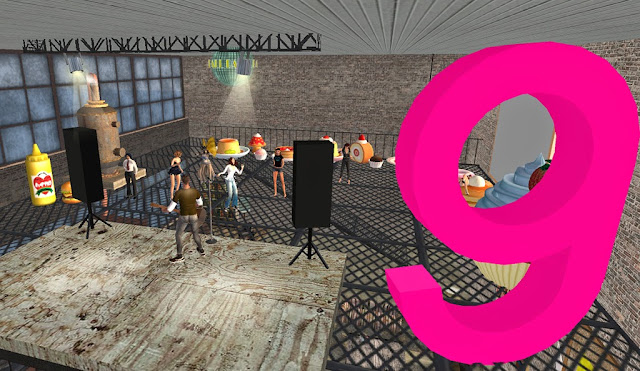 Our crazy friends. Not sure what I'd do without them, and I'm glad I'll never have to find out. Photo and top photo by Kat. 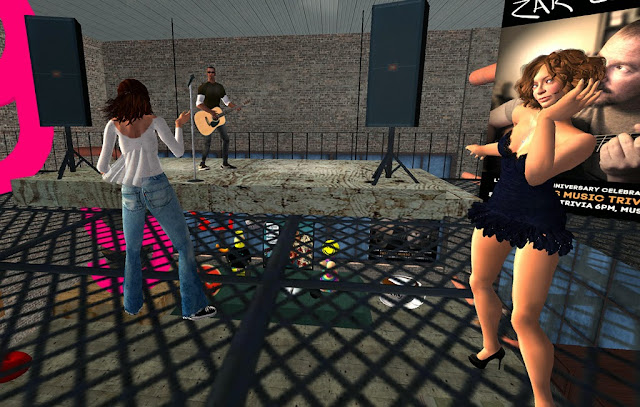 My darling Kat and the lovely Triana herself rocking with me. Photo by Kat.
As most of my readers know, Triana (or Jess, as we call her in the fleshy world) has become a great friend to Kat and me, and we've been able to hang out together on a number of real-life occasions. Performing at TMT a couple of times per year is the least I can do to tell her how thankful I am of her friendship. Every June for the past six+ years (as you can see here, here, here, here, and here), I've played live at TMT's anniversary celebration, and it's always fun. One reason is that since many of the people who attend TMT have seen me play so often, I use the event as a special occasion to perform songs I've never done before, as you'll in the set list below.

*Indicates the first time I've performed this song in SL.
†I tend to do silly versions of songs at TMT. This was my own song, performed country style by my fictitious cousin from Kentucky, Bobby Jack Claxton.
††Kat joined me for harmonies for the first time we did this song live together.

Huge thanks to not only Triana, but to all the TMT people with whom we've been great friends over these many years together! As the song says, "There's nothing trivial about you!"
Posted by Zak Claxton at 12:40 PM