Congratulations on your victory and your upcoming role as our next President of the United States. It's a job that I'm sure you'll accept with all the seriousness and responsibility that it entails, and I wish you all the luck in the world in fulfilling the goals that will, in your words, make America great again.

Perhaps the most difficult part of your job won't be extending your appeal to people like me... those who did not support your candidacy, but whose support you'll eventually need to accomplish your goals. That's likely not going to happen, but many Presidents have dealt with a majority of the population disagreeing with them, and they ended up just fine. No, as you're already aware, the challenging part will be those moments when the people who voted you into office slowly come to the realization that you're not the leader who they thought you were. Many of them elected you in the belief that you are as filled with darkness as many of them are. And -- let's be real here -- you're simply not.

There are those, Mr. Trump, who believe that you will be able to put a complete ban on immigrants based on their religion. You can't blame them for thinking this; you certainly inspired those thoughts. How will they react when this presents itself as impossible without a constitutional amendment that specifically allows for religious persecution, or when they become aware that any such legal change couldn't only apply to people of the Muslim faith but rather any religion that falls out of favor of the moment?

Then there are those who are expecting you to fulfill your pledge to build a physical wall that extends over 1,500 miles through desolate terrain from San Diego, CA to Brownsville, TX. You're a smart man; you know this wasn't ever within the realm of possibilities. Those people are going to be disappointed, Mr. Trump. Sure, you'll be able to find others to blame for your promises remaining unfulfilled. But most of them -- the truly deplorable ones, as they've been called, will just blame you.

And then there are those things you stated or insinuated that might actually happen. You could stack the deck of the Supreme Court to try and repeal Roe v Wade, for example. But the reality is that you, personally, don't really want to do that. You never did.

The good news -- at least for me and people like me -- is that you're really not the man who you painted yourself to be during the election. Hey, you're far from the first person who created a false image that allowed himself to attain office. It's understood, and though we grumble about it, it's expected that most campaign promises aren't worth the paper on which they're written. But now the election is over, and you have an opportunity you never, ever had before in the private sector: you can do things that will make you loved by millions and millions of people.

At the end of the day, that's what you truly want -- it's not hard to see. You want to be loved, and that's fine. Nothing would make me happier than to find out that there's a Donald Trump whom we haven't seen over the last two years. As Secretary Clinton said in regard to you during her concession speech this morning, "I hope that he will be a successful president for all Americans," and I share her hopes. You know very well that the "all Americans" to whom she referred include people of color, people of different sexual orientation, people from around the world who come here in search of a dream and are willing to work hard to make this country great. Those are Americans, the people whom you serve. They're counting on your support, as are all of us.

There will be times -- probably much sooner than anyone expects -- that the very base of people who helped elect you will turn on you when you don't promote or allow for hatred. Be strong when that happens. You will never be liked by everyone, but you can surprise many of those who assume they could never live in a country under your leadership.

We'll be standing by and waiting for this version of Donald Trump that wasn't apparent during the election. We're going to give you a shot, and you're a tough and smart guy who knows how to take advantage of an opportunity. Grab this moment to do the right thing. And, as I said, we'll be watching closely, and we'll be ready to take action in the case that I am mistaken about who you truly are. We take our rights and liberties pretty seriously here in America, and you will be under more scrutiny to defend those rights than any President in history. Needless to say that as President, you've just become the employee of 320 million people, and it's going to be a tough adjustment becoming a servant of the public.

As I said up top, I sincerely wish you luck. We all look forward to watching you do your best. This will be the hardest job you ever had, and perhaps it will all work out... for you, and for all of us.
Posted by Zak Claxton at 10:34 AM 0 comments 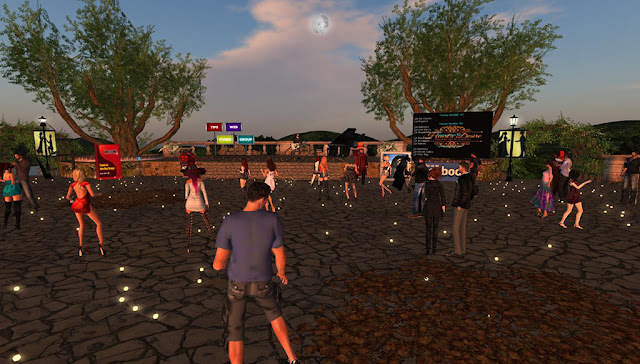 Fun people, cool place, happy Zak. Photo by Triana Caldera.
Something I've noted time and time again over the past 10 years of performing live music in Second Life: when I least expect to have a great show is almost certainly when those great shows will happen. Take yesterday's show, my debut at Heart's Desire, as a perfect example.

I didn't have a bad day, but I did have an insanely busy day leading into that evening. Multiple business meetings, deadlines to accomplish, and everything else that was the extreme opposite of how people think a rock star spends his or her day. It certainly didn't give me much time to focus on my music, or even to plan a good set list. I barely had time to set up my gear and properly warm up before the show. Additionally, it was the first time I was going to perform at this venue, and there have been wildly unpredictable results in those situations. I never know how many of my friends/fans will be around in SL at any given day/time, or who want to hang out at some place they may not have heard of or visited previously. And then, there's my own degree of... I won't call it "stage fright", but there's a higher level of anxiety when one performs for new people at a new place. Will they like what I do? It's a subjective experience, live music, and you never really know if you're the right performer in the right venue until you start that first song.

So, you'd think the best I could have hoped for under those circumstances was a decent show where I played adequately and we got a few people there, and I'd have been fine with that. However, that's not what happened. Instead, unexpectedly, my guitar and voice both chose to cooperate with what I wanted them to do, the venue (the place itself and the people running it) was fantastic, and we had a really great crowd made up of Zaksters and new folks alike, and everyone really seemed to dig what I was doing. It's hard to measure these things tangibly, but I felt like it was one of my best shows of 2016. 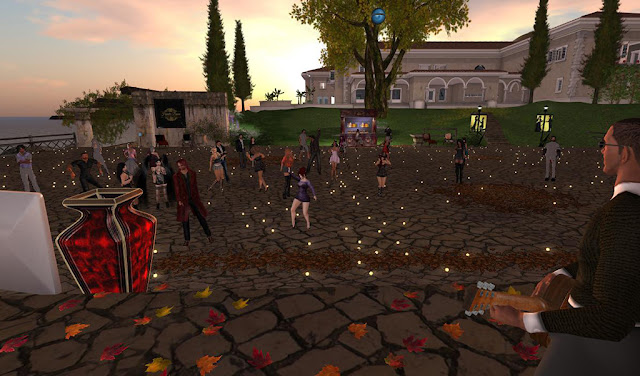 Seeing a buttload of Zaksters in the crowd probably contributed to my having a good show at Heart's Desire. Photo by Triana Caldera. 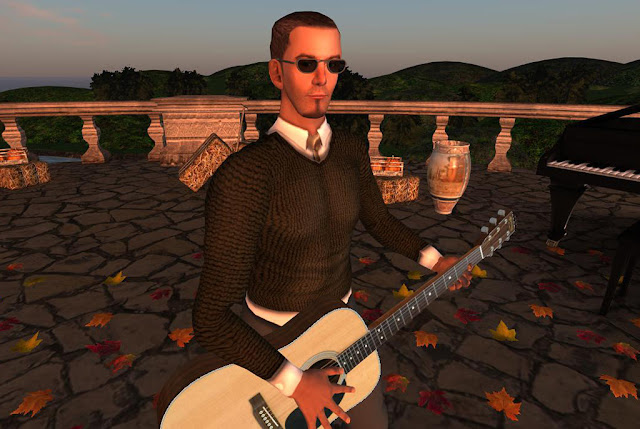 I actually dressed up for the occasion... a rare event in and of itself. Photo by Triana Caldera.
Side note: the way I ended up performing there was pretty cool, and it was a story I related during the show. During September's Twin Cities SL Jam, I met a number of folks who I hadn't previously encountered in real life. One of them was Cryptic Harmony, a singer whose name I'd heard quite a bit but hadn't really gotten to know. We chatted during the Jam, and she told me that she helped book talent for a venue. I told her that I was always up for playing places in SL where I hadn't been before, and to connect with my manager Maali Beck. When Heart's Desire appeared on my schedule, I hadn't made the connection that this was the place that Cryppy was referring to in our talk at the Jam, so it was a fun surprise to put two and two together when I took a closer look at the contract.

I should add that the venue owner Spence Corwin seemed to be a super nice guy, the venue staff was totally organized, and the folks who were hanging out there were cool and receptive to the music I was playing. I honestly can't ask for anything other than that when I do any show in SL... or anywhere, for that matter.