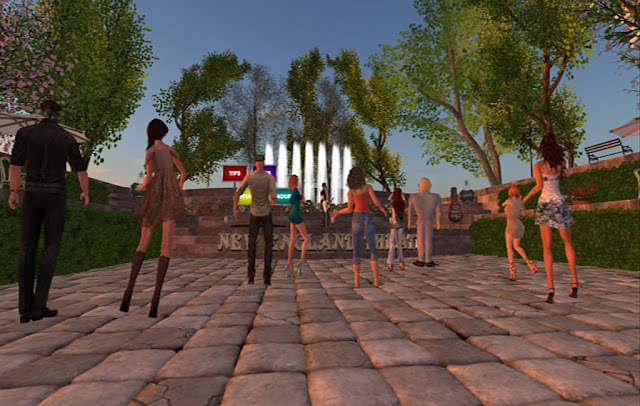 Playing some tunes, laughing with friends. A typical night at The Islands of New England in SL. Photo by Triana Caldera.
Hey blog. I haven't been here in a month or so. How ya been? Not mad at my absence, hopefully. It wasn't intentional; I just haven't been doing any live shows lately.

Actually, that's not true. Just last weekend, in an act of extreme randomness, I picked up a bass and turned on Facebook Live, and did a playthrough of multiple Rush songs. Twice. Frankly, while that was silly and fun, it was a bit of a wankfest. Nothing wrong with Rush, mind you. It's just not really representative of the music that I do on a regular basis, even if it was a fun surprise to do something completely unexpected. Regardless, it wasn't exactly what I'd call blog-worthy. If you really need to see me wearing a kimono and doing a B-minus impression of Geddy Lee's godlike bass playing, you're welcome to do so.


But last night's show at The Islands of New England in Second Life certainly was worth a few words. I play so rarely in SL these days that I do try and make each show somewhat special. TIONE is a place where I feel very comfortable, which means it's more likely that I'll stretch out a bit and try some new stuff from time to time. One way I can tell that the show will be good before I strum a single chord is to glance up at the audience. When I see a majority of green name tags -- the indication in SL that someone is your friend -- that's always a positive note. Perhaps just as good is when I see people whose tags change to "Zakster" sometime during the show, meaning they asked for an invite to my fan group. That means I did or sang or played or said something interesting enough to make people want to know when and where I'm playing next. That's a good feeling, and one I don't take for granted.

The actual show that I performed went well... mostly. On a positive note, I did a couple of songs I'd never played before. One was an oldie. Speaking of Rush (above), it was a band that I -- like many young musicians of my generation -- was really into in my teen years, along with a number of other progressive and hard rock bands who play intricate and challenging music. I had a short-lived Rush cover band called Permanent Waves when I was about 15. Yeah, really. The reason I don't play much music by that band is very simple: a) Geddy's voice is nearly impossible for me (or anyone) to cover well, and b) per above, I've moved on to other areas of interest in terms of the style of music I prefer to perform. However, Thea Dee is one of my good friends in SL -- who happens to also be a person with whom I went to college. She's a massive fan of the band, and I've long wanted to pick out a song by Rush that was somewhat within my vocal range and possible to cover on solo acoustic guitar for her benefit. That song turned out to be "Entres Nous", and it went fairly well, I think. The other new song was truly new; "It's Easy (Like Walking)" was released a couple of weeks ago on the new album by The Sadies, and it features one of my favorite singer-songwriters dudes: Kurt Vile. The moment I heard it, I knew I'd be covering it. 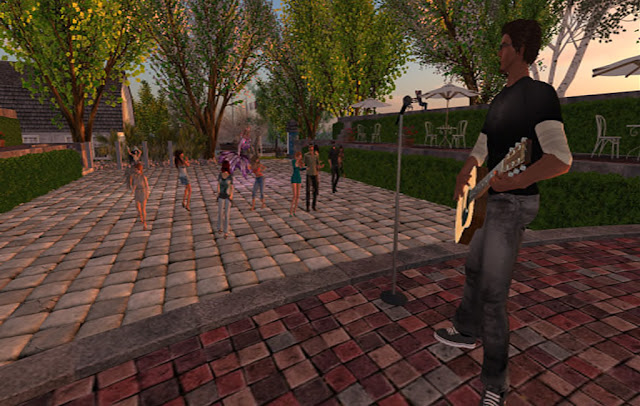 My shows are equal parts music and silliness. Sometimes more silliness than I expected. Photo by Triana Caldera.

People seem to have fun either way, so it's all good. Photo by Triana Caldera.
One hilarious side note. I got to the end of my set and had time for one more tune, so I launched into "Say Goodbye" by Beck. I did the first two chords, and then my brain completely blanked on how the song actually goes. While I do have lyrics sheets, I don't use any chord charts while I perform. Twice, I tried to get the relatively simple song rolling, and twice, the launch was aborted at takeoff. The result was, I must admit, pretty damn funny, when I eventually gave up and ended with a completely different song.

*Indicates the first time I've performed this song in SL.
†I've only done "No One Knows" once before, in April 2014, also at TIONE coincidentally.