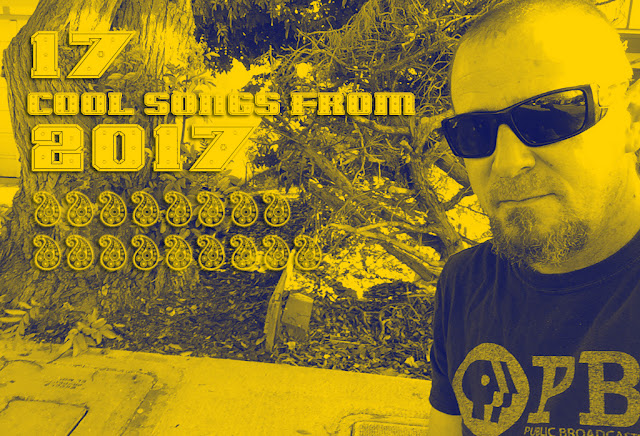 As the year begins waning each December, I give you a list of songs that I enjoyed in some way. These may not be the best songs of the year. They may not even be my favorite songs of the year. But they are cool songs, and yes, they came out in 2017. In alphabetical order...

Like many people, the first time I heard Aimee Mann was in 1985, when her band 'Til Tuesday had a pop hit with "Voices Carry". Then she inexplicably popped up on backing vocals for Rush's "Time Stands Still" a couple of years later. Then, in 1999, she had the magnificent song "Save Me" from the Magnolia soundtrack. Since then, there's been nothing she's done that I haven't enjoyed, including this tune off her latest album Mental Illness. Buy it on iTunes.

Four girls from Atlanta doing lo-fi basement pop? Sure, sign me up. There's something about "Catdog" that reminds me of bands I had in my early teen years, when none of us knew how to play well enough to be anything but awesome. Buy it on Bandcamp.

It's Beck. No matter the genre, if you expect anything less than genius, you're listening to the wrong guy. I heard it said quite well that Beck goes through an insane amount of detailed work to make his albums sound effortless. He succeeds; we all win. This is great pop. Buy it on Bandcamp.

Courtney Barnett & Kurt Vile - "Over Everything"

So... I'm a huge fan of Kurt Vile and Courtney Barnett individually, so I sorta freaked out when I heard they were working on a collaboration album. When it came out, it did not disappoint. This song and the album it's on, Lotta Sea Lice, ended up toward the top of every indie rock critic list for the year. I liked it so much, I actually left my comfortable home and saw them perform it live in October. Buy it on Bandcamp.

Most of you know that I am a huge aficionado of the Mojave Desert and visit Joshua Tree as often as possible. My friends and I are also fans of the music of the area, and have spent plenty of time seeing shows and eating ribeyes at Pappy & Harriet's. Dave Catching, a member of Eagles of Death Metal and a producer/contributor to much of the music that we call Desert Rock, released a kick-ass solo album called Shared Hallucinations Pt. 1: Sonic Salutations From The Venerable Vaults of Rancho de la Luna 1972-1984. Buy it on Bandcamp.

Grizzly Bear is more of a Brooklyn hipster band than I'm used to enjoying, but I liked "Mourning Sound" from the moment I heard it. Just because it was a critical fave doesn't mean it doesn't merit being on my annual list. Buy it on iTunes.

I like Kalbells for three reasons. First, this song is awesome. Second, her bio says that Kalbells is the solo work of Kalmia Traver, lead singer of Rubblebucket, but I have no idea who Rubblebucket is. Third, I read somewhere that the project was named after a folder in Dropbox she was using to send stems back and forth to her engineer, which seems like something I would do. Buy it on Bandcamp.

This is from Melkbelly's debut album, but the stuff I've heard from this band doesn't sound like most first efforts. I think they'll have more cool stuff in the future. I hope so, anyway. Buy it on Bandcamp.

This might be complete bullshit, but I recall reading that Ohmme was originally called Homme, as in Josh, the frontman of QOTSA. That didn't work out, so they juxtaposed the first letters and carried on. I really don't care; I just like their vibe and their willingness to be experimental. And their voices. And stuff. Buy it on Bandcamp.

Seriously, my friend Nicholas Stevenson makes my list every year, because his sound is just great on everything he does. His latest venture has him teaming up with Oliver Wilde, and the result is spectacular in a "we recorded this in a week in a kitchen" kind of way. The songs hold up. Buy it on Bandcamp.

Palm is an experimental/prog/pop band out of Philly. They're arty, noisy, and I like them. How about that? Get their music on Bandcamp.

Queens of the Stone Age - "The Evil Has Landed"

So, it had been a number of years since QOTSA's last album. Josh had remained busy doing various cool things, but this album was very highly anticipated. And then a bunch of people freaked the fuck out when they heard it was being produced by Mark Ronson. Look, if you want every song by a band to sound the same throughout their entire career, go listen to AC/DC. I really enjoyed Villains. No, it's not my favorite QOTSA album, but it's really good in places, such as the hooky-as-fuck song here. Buy it on iTunes.

The Sadies are cool, but they're a little more country than I tend to like at first listen. But throw my pal Kurt Vile and a set of repetitive but great lyrics into the mix, and bingo-bango... a song I listened to and performed a ton of times in 2017. Buy it on Bandcamp.

You ever associate a song with a particular moment? Of course you have. With "In the Midst" by sir Was (a jazzy electronica guy named Joel Wästberg from Sweden), it's Bunny, Christina and I cresting the hill up the 62 from Morongo Valley into Yucca Valley heading toward Joshua Tree and being very happy. Buy it on Bandcamp.

Spoon is one of those bands that I still think of as a new band despite having been around for like 25 years, meaning I'm just old. But they've been very influential on indie music, and their latest is really excellent. Buy it on iTunes.

First, I enjoy so much of Jeff Tweedy's creative output, it's no surprise I'd like this kind of random single that hit over the summer. But the fact that I really appreciated the theme of the song, that Jeff dedicated it to his father who passed away this year (as did mine), and that it's a charitable effort toward causes I support, makes it a winner by all definitions. Buy it on Bandcamp.
Posted by Zak Claxton at 7:45 PM