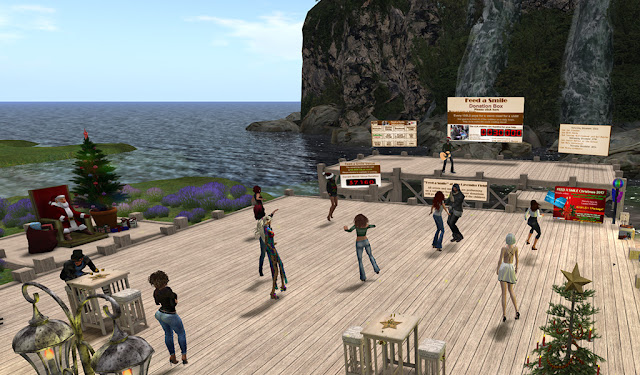 Feeding people with music at Feed-a-Smile. What an odd idea, and yet somehow, it works. Photo by Kat.
Before you begin to define what music can do for the world, you first must ask yourself what music is, and the more you think about it, the weirder it is. Music is sound... vibrations that travel through a medium such as air, with molecules crashing into one another in the space between the source and your eardrum where it is perceived and processed by your brain. We musicians take various sounds and organize them in some way that is pleasing or at least interesting to ourselves and other humans, and we call that music. It's an art form based on... what? Vibrations and air? It's bizarre. Does music even exist? Is it all some dream we share?

Now, in this modern era, let's get even more weird. I stand in a room in front of a microphone with a guitar in my hand. My vocal chords vibrate. The strings of my guitar vibrate. These vibrations are converted into electrical signals which are then converted into digital data which travels literally into space, going to satellites and back to various parts of the planet where they are received thousands of miles away by equipment that can decode them and changed back into acoustic vibrations that hit the eardrums of various people who are able to listen to these vibrations almost instantaneously. It boggles the mind.

Regardless, music has been part of the human experience since time immemorial, and it's an important part of the daily lives of a good percentage of people. Music is considered an art by those who create it, and entertainment by those who receive and enjoy it. But it can sometimes be something more than that. Music can affect a human's emotional state. Music can be considered happy, or sad, or thrilling, or calming. No one really knows why; it's a part of our humanity, embedded in our DNA, perhaps from a time before we'd even evolved into the beings we are.

The final thing I want to say about music is that it can be inspiring. Just ask Brique Zeiner, my lovely friend who runs the Feed-a-Smile charity via Second Life. As I've written about many times before, Brique is a wonderful human being who has dedicated a good portion of her life to helping children in Africa via a foundation called Live and Learn in Kenya. At some point, Brique quite correctly deduced that music-based events in Second Life draw the largest crowds, and that Second Life musicians each have their own followings, which is a good combination for successful fundraising. 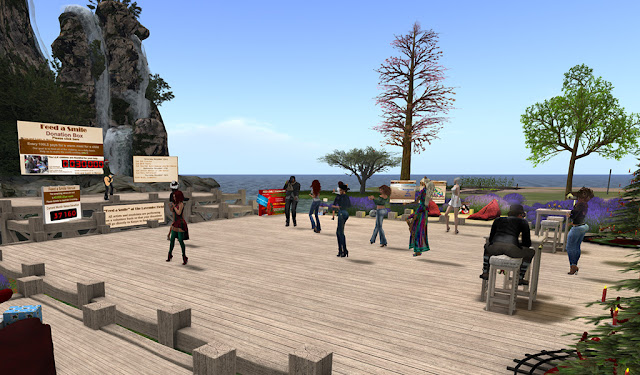 I had no idea that this show would end up being the most successful fundraising event I'd ever done, which just goes to show you that until you strum that first chord, you never know what's going to happen. Photo by Kat.
While now based in Germany, Brique actually grew up in the same suburb of Los Angeles I call my home: Redondo Beach, California. We share many of the same influences in life, which perhaps is one reason why I am so supportive of her efforts to help feed and educate these kids. Her inspiration is likely more based on religious reasons than mine, but even as the atheist that I am, I see nothing but good in helping to create a generation of people who see that their lives are important and have meaning. It's not only good for them; it's good for the world. If you want to fight terrorism, dropping bombs does nothing except create new terrorists. Dropping music and love instead lets them know that people want to offer them happiness, hope, and a chance at a good life.

L$100,000 in One Hour
So, I'll get to the point now. Unlike most SL shows I do, when I perform at Brique's SL venue Lavender Field for Feed-a-Smile, the goal is not just to make good music and bring a little happiness to the people who happen to come to my show. It's to raise money for her cause. I've done plenty of successful fundraiser shows in Second Life for various worthwhile causes. I've probably done a dozen shows or more for Feed-a-Smile alone. I don't have a specific amount of money raised to be considered successful. Sometimes you just don't get a large crowd to show up; sometimes those who do simply aren't able to contribute more than they can afford. There's nothing wrong with any of that, and frankly, I wasn't expecting a good crowd or a large amount of funds raised at yesterday's show. It was two days before Christmas. A lot of folks are at the end of their limit in terms of spending, having bought gifts for friends and family, or budgeting for travel over the holiday season, and so on. All completely understandable.

That's why, at about the halfway point of my show when Kat tapped me to glance at her monitor, I was truly shocked to see that we'd already raised over L$50,000. She alerted me again while later to show me the number was then at L$75,000. And at the very end, as I got off the virtual stage, I turned around to see the donation counter having just passed L$100,000. That's about $400 USD. In one hour. Pardon my language, but holy shit! Look, if we'd raised L$20,000, I would have been very happy. Here's why: the way Brique has set up Feed-a-Smile is very smart. The numbers work out so that basically each L$100 (about $0.40 USD) donated gives a kid a hot meal. Each L$100 equals a meal, so if I'd raised L$20,000 as I would at a typical successful show, that's wonderful. It's the equivalent of 200 meals. That's really nice.

I don't know, frankly, what happened yesterday. I do know that several of my Zakster fans were being very generous with donations, but I also get the idea that someone else in that crowd was being an angel benefactor, matching and doubling (or even tripling) funds being donated by others. All I know if this: at the end of my show, we'd raised enough for a thousand meals for the school kids in Nakuru, Kenya. I've performed at plenty of successful fundraisers in the past for many worthwhile causes, but never have I been a part of raising that much that fast. Here I am the following day, and I'm still in shock and disbelief about it. 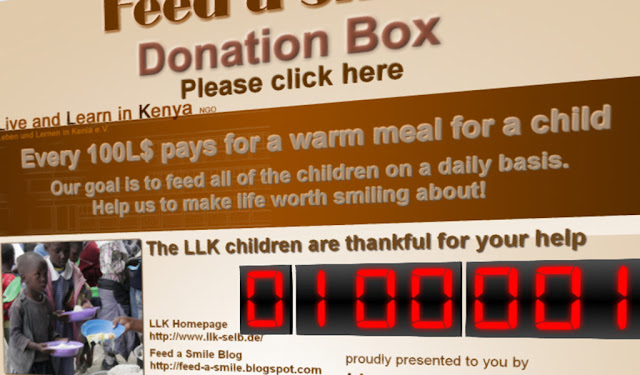 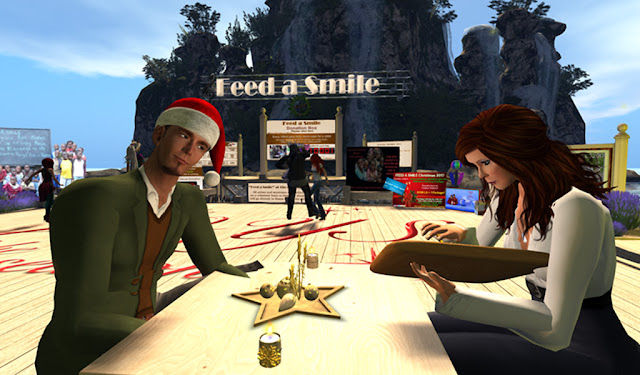 Kat and I after my show, listening to Beth Odets while still in shock over the L$100,000 show I'd just completed. Photo by Kip Yellowjacket.
In addition to what these generous people did for the kids, I can tell you what it did for me. It filled me with happiness and a renewed belief in the positive nature of humanity. Thinking about it today, on Christmas Eve, it's particularly touching to consider how people can be so kind to others whom they'll almost certainly never meet. But that's what makes the world a great and wonderful place. It's an ancient proverb that a society grows great when old men plant trees whose shade they'll never get to enjoy. What I witnessed yesterday was the selfless act of people who are literally changing the lives of strangers for no reason other than that it's the right thing to do, with no expectation of personal reward other than being able to feel good about having made the world a little brighter for a moment.

I have no way of thanking those people individually; their donations are anonymous to me. Therefore, I can only thank them collectively, and tell them that what they did was amazing. My own small part of having invited some folks to attend and then spending an hour making live music was really minor compared to what they did; they are the heroes, and they merit all of our respect and admiration.