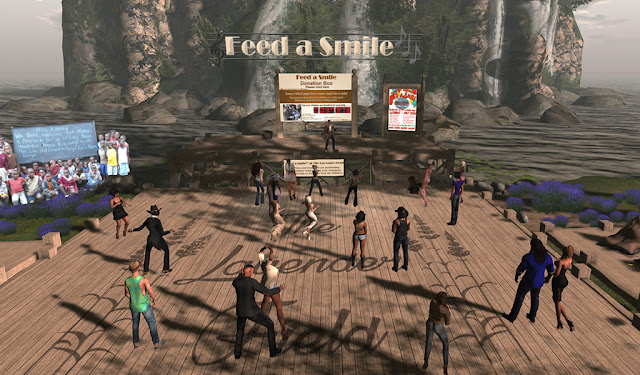 It felt great to be back at Lavender Field raising some money to feed some smiles. Photo by Kat.
The first time I ever performed for Brique Zeiner's charitable organization in Second Life, Feed-a-Smile, was in September 2011, and on many other occasions since then, I've been happy to refill my karma bank balance by playing there again. It was just a few days ago that Brique messaged me on Facebook to find out if I could perform at the celebration of their ninth anniversary, and being that it was on a Saturday at an excellent time for me, I accepted immediately.

The brief description of Feed-a-Smile is as follows: Brique and her husband run a non-profit organization called Live and Learn in Kenya with the focus of feeding and educating poor children living in the slums of Nakuru, Kenya. It's an extraordinarily effective charity with the money going directly to the children with no corporations or middlemen involved. Brique also happens to also originally hail from my town of Redondo Beach, CA, so we had a connection right from the start. In Second Life, Brique set up an area called Lavender Field, and hosts fundraising music performances there with the simple message that L$100 (about $0.40 USD) gives one child one hot meal. 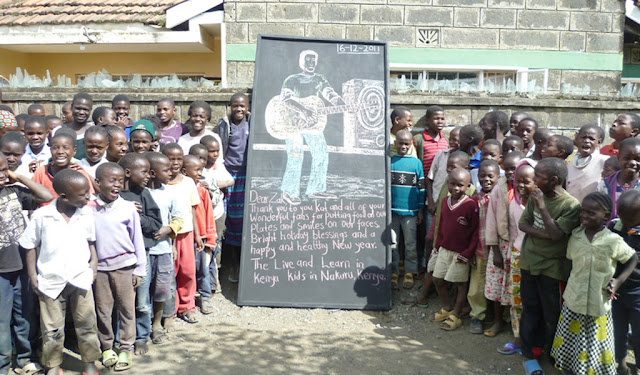 After one of my shows for Feed-a-Smile in 2011, I unexpectedly received a set of pictures from the kids that included the one of above, plus shots of them having a feast via the funds raised at one of my shows. I referred to it at the time as my proudest moment as a musician, and those pics were framed and hang on my wall still today.
The timing of doing a charitable show couldn't have been better for me. The world -- especially here in the USA -- has seemed filled with darkness and hate in recent times. Instances of blatant racism and fascism have been at the top of the news cycles. It's been my experience through much of my life that taking part in actions that help humanity as a whole are also what are most healing to me personally, be it in the form of protests, rallies, and marches, or more direct efforts like doing a music show for a charity in which I truly believe.

Star Trek: Picard Trailer
I'll resume telling you about the Feed-a-Smile show in a moment. It was awhile after the show that while poking around Twitter, I saw that "Star Trek: Picard", the upcoming new series in the Star Trek universe, was trending at #1. I soon found out why; San Diego Comic Con was in full swing, and they had debuted a new full-length trailer. I was already pretty interested in the series which is set to debut next year, but when I clicked the link, I didn't quite expect this...


Obviously, the series looks great and it's terrific to see Sir Patrick Stewart back in action; he's a treasure and it's good to know that we'll have some new stories coming from the iconic character of Jean-Luc Picard. But then, what blew the collective minds of every Trekker in the world was the unexpected appearances of Jeri Ryan as Seven of Nine and then Brent Spiner -- possibly as the android B-4 (as opposed to Data). Is it a nostalgia trip for Gen X'ers? You betcha. Am I still enthralled at seeing members of the Next Generation and Voyager crews together again? Oh hell yes. I'm looking forward to this more than I would have possibly anticipated.

The Show
Okay, back to Feed-a-Smile. One sort of funny note. The artist performing before me was having trouble with his stream, and with a good 15 minutes left in his set, I wasn't at all prepared to go on (though fortunately, I did already have my music gear set up and ready to go). Next thing I knew, I had to jump in and start playing, but it all went just fine. It usually does.

Brique had put together a really good lineup of musicians, most of whom had played at the venue multiple times over its nine year run. All the people who played the show, like Quinton Whitman, Whirli Placebo, Bat Masters, Grace McDunnough, Max Kleene, Twinghost Ronas and others, are veteran SL performers, and all of them donated some of their time to be there for the event. It went great; the fundraising seemed to have gone very well, and we had a terrific crowd there the whole time.

One thing I've mentioned before: on the rare occasions that I do shows on weekends, I absolutely love playing at noon. It's the perfect time to have slept in somewhat, have coffee, shower and dress, have breakfast, have time to warm up and then perform, and then still have most of the whole weekend day ahead of me. Count me in for noon shows on weekends basically any time. 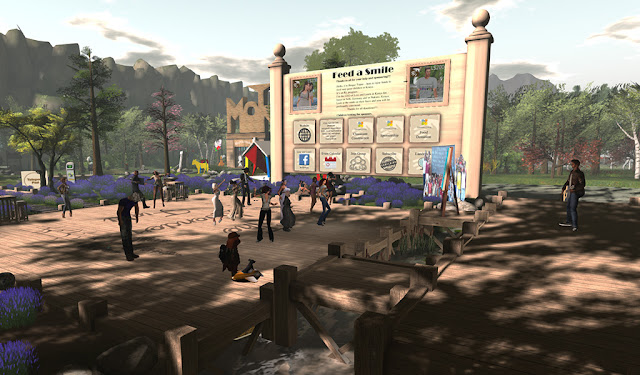 A lovely day to feed some smiles. Photo by Kat. 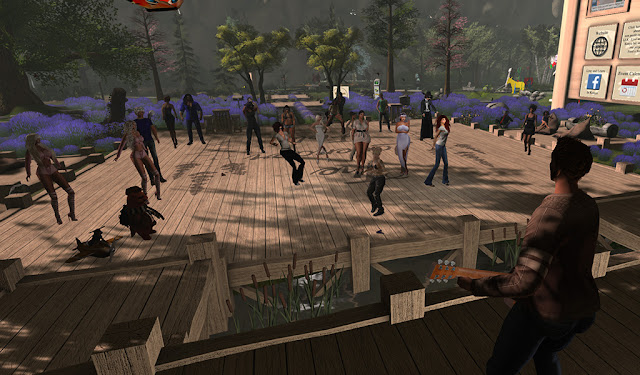 Our crowd was engaged and generously donating, as they tend to do. Photo by Kat. 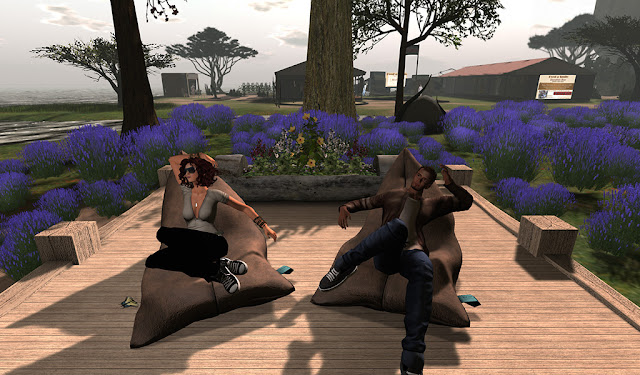 Chilling after the show and listening to the other performers. Photo by Kat.
Feed-a-Smile set list...
Save It For Later (English Beat)
Among the Leaves (Sun Kil Moon)
I Am a Child (Neil Young)
This Afternoon (Zak Claxton)
Strawberry Fields Forever (Beatles)
Blew The Dust Away (They Stole My Crayon)
Radio Free Europe (R.E.M.)
Peace Love & Understanding (Elvis Costello)

Thanks to everyone who spent some time, money, or both on supporting Feed-a-Smile during yesterday's event! You are awesome!
Posted by Zak Claxton at 11:51 AM