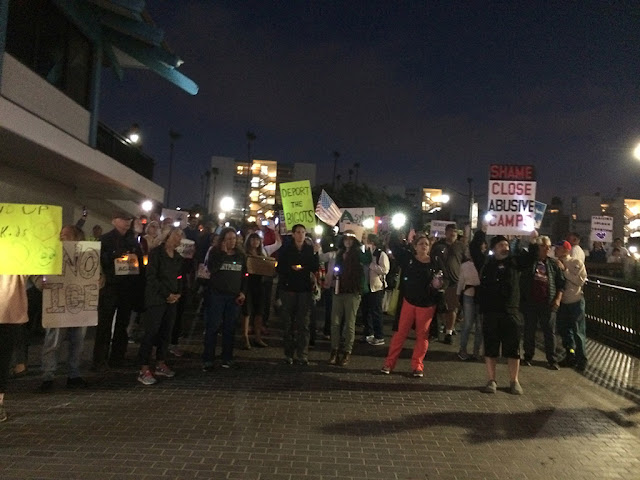 It was several weeks ago that Christina mentioned a possible protest that we might want to have on our radar. It was called Lights for Liberty, and its focus was the immigrant detention and child separation policies of the current US government administration. When we first looked into it, the event locations were scattered around in various large city centers, and our initial thought was to drive a couple of hours south to San Diego, close to the border and near some of the detention centers. That was going to require a little planning and forethought... and, like most people, she and I are just too fucking busy for just about anything outside of our already insane schedules of work and life.

Despite the high degree of importance both of us feel about this cause, I think we'd pretty much put aside the possibility of being involved. We weren't sure about the details of the San Diego event, which would have required stopping work early on Friday, driving 120 miles, participating in the event, getting a hotel, and so on. It seemed a little much. But a few days ago, I took another look at the Lights for Liberty site, and noted that the list of local event locations had ballooned... and that there were two events that were mere minutes away from our home. Well, that was a whole different thing. We decided that the one just a couple of miles down the road, at Veterans Park just south of Redondo Pier, would be great as long as people were showing up.

Well, the best way to have a good turnout is to show up yourself and be a part of that crowd you're hoping for. We were aware that this event came together rather quickly, and that mellow Redondo Beach wasn't exactly the biggest hotbed of political activity in Southern California. Still, since Christina and I had been involved in several other protest events in the area, we knew that there's always a segment of the local populace who are awake and involved... and like us, don't want to deal with driving into downtown LA and finding parking. The local events in which we participated in 2018 -- March for Our Lives, Families Belong Together, and Nobody is Above the Law -- were all inspiring and fulfilling. We're proud residents of the South Bay, and I think it's very good that events like these have a presence in the suburbs as well as the inner cities. 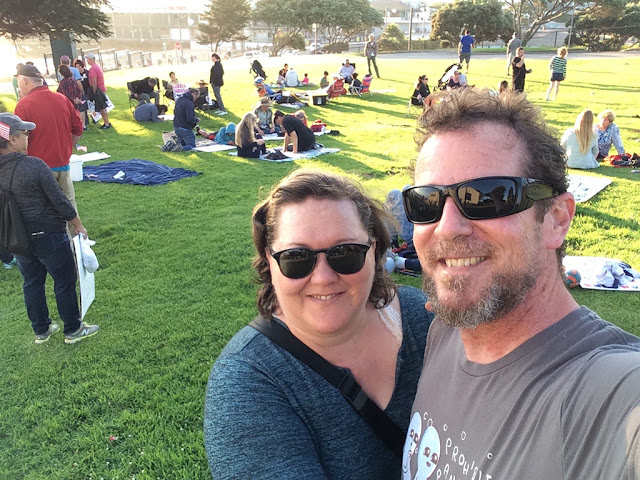 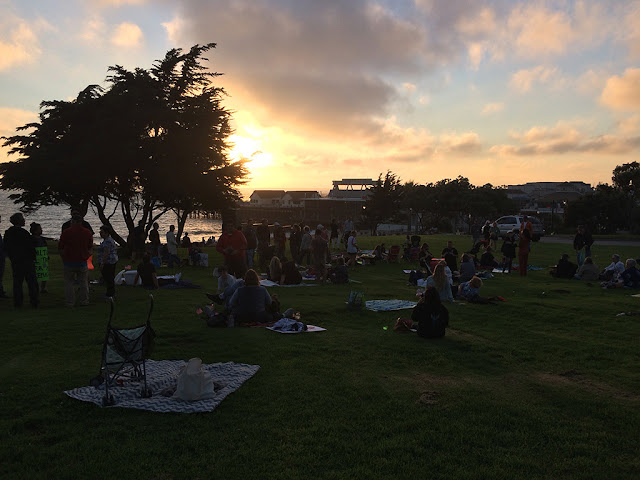 As per the aforementioned being busy, we didn't head down to Veterans Park until about 7PM. When we arrived and miraculously got a reasonably close parking spot, we didn't see many people and at first were disappointed that the event seemed to have died on the vine. However, as we looked aways down the park area, we could see a number of people gathered, so we joined them. The day had been lovely, and there was a nice breeze coming off the ocean as the sun started to go down and more people began to arrive. The crowd -- comprised of all kinds of people of all ages including many families -- swelled to about 150, most people with signs expressing their support of the cause in various ways. Per the theme of the vent, everyone carried lights of various kinds. Christina and I used some cheap-ass LED flashlights that I purchased at Dollar Tree earlier in the day.

After the sun went down, the organizers decided that we needed to be a little more attention-grabbing (an idea I strongly supported), so we marched the short distance from the park to the entrance to the Pier, shouting things like, "Close the camps!" and "Immigrant rights are human rights!" and so on. As the somewhat experienced protestor that I am by now, I'm happy to say that I helped cheerlead a few of these chants. We got to one of the Pier entrances, but I encouraged the group to go no further; the aspect of being on private property without a permit would be problematic to say the least. So we stayed there a short while, and then marched back to the park. People seemed to be energized and somewhat optimistic, as is often the case at these events.

There were a few moments of short improvised speeches by a few of the attendees, and then we went off into the night. Christina and I stopped for food on the way... it was about 9:30 by then and we had yet to eat dinner. But we both agreed that we were glad we'd gotten involved in supporting this important human rights effort in our home town.
Posted by Zak Claxton at 3:22 PM