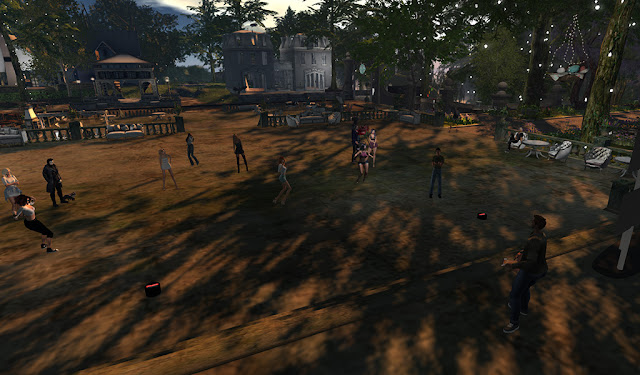 Another lovely evening at Serenity Gardens. Photo by Kat.
Before I talk about my show at Serenity Gardens in Second Life, let me tell you a little bit about something called the Endangered Species Act of 1973. It was signed into law by president Richard Nixon, and its intent was to protect critically imperiled species from extinction as a "consequence of economic growth and development untempered by adequate concern and conservation". By all standards, it has been a resounding success. A number of animal and plant species that would have certainly been driven into extinction through hunting and through land development that destroyed their natural habitats are still here today purely through the regulations of the ESA. 54 of the species originally listed have been de-listed from endangered status due to the recovery of their population. The law has worked tremendously well.

This week, in a move that disgusted many but surprised few, the Trump administration announced major changes to the Endangered Species Act that will weaken its enforcement, and allow industry to act in their own economics interests to destroy these threatened species' habitats. Trump has gone on record as having personal dislike toward animals of all sorts; there's a reason why he's one of the only US presidents in history to not have a dog at the White House. His sons, quite infamously, posed with majestic animals that they'd shot and killed on hunting trips. This is a family that, by all evidence, openly loathes wildlife and the environment. 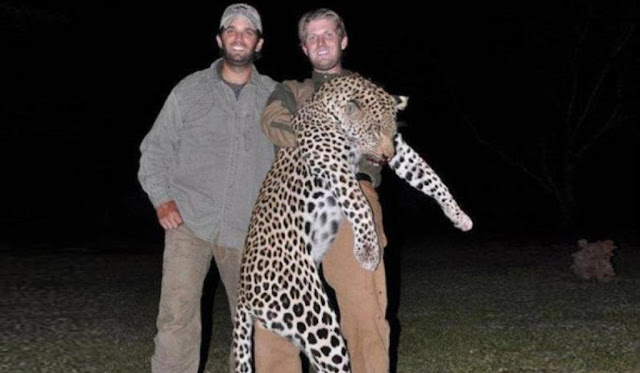 Donald Trump Jr. and Eric Trump posing with the leopard they'd murdered during a hunting expedition. The leopard's status on the IUCN Red List is as a threatened species.
We live in a world that exists through ecological balance. Our own existence as humans is predicated on that balance. It is nearly unthinkable that we would purposefully allow the destruction of habitats (and the legalized hunting) of any species that might go extinct through our greed or negligence. One can only hope that the damage that the world suffers under this presidential administration can be limited and fixed after his departure. Up to a certain point, species can be revived, in the same way that laws can be changed and walls can be torn down. The only optimistic view is that we won't get past the point of no return for these creatures, or for ourselves.

Back to the Show
As I've mentioned time after time in regard to live music performances... I enjoy myself equally whether I have three people or 300 or 3,000 in the audience, and especially for a show in Second Life, where in reality I'm in a room in front of a microphone and a computer, there's very little impact on my vibe as a performer regardless of crowd size. Especially considering that I certainly don't judge the quality of my shows based on silly factors like amounts of tips or ego stroking, it literally doesn't matter to me how many folks are there. All I do hope for is that whoever shows up is enjoying themselves and that they let me know they're into the show. 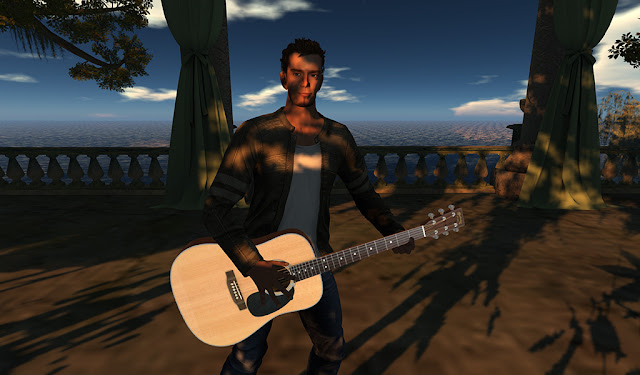 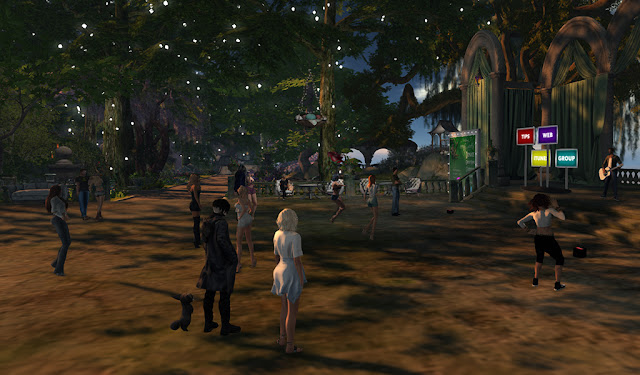 Serenity Gardens in the shadows. Photo by Kat.
I had a couple of previously unperformed songs in my set. One was "Killing Me Softly with His Song", the #1 hit from Roberta Flack in the early '70s, which I'd just decided to do on a whim a few days earlier. The other, oddly, was "Mrs. Robinson" by Simon and Garfunkel. I'd put the song into my repertoire probably ten years ago... and then never played it once. Why? I don't know.

Many thanks to all who came out the my show, with special thanks to the following who helped support it!
littlebit31okla Resident, Asimia Heron, Triana Caldera, AaronCabottJones Resident, Trouble Streeter, go2smoky Resident, Kat Claxton, my excellent manager Maali Beck, and the fabulous team at Serenity Gardens, Tilly Rose and Ilsa Wilde!
Posted by Zak Claxton at 12:45 PM