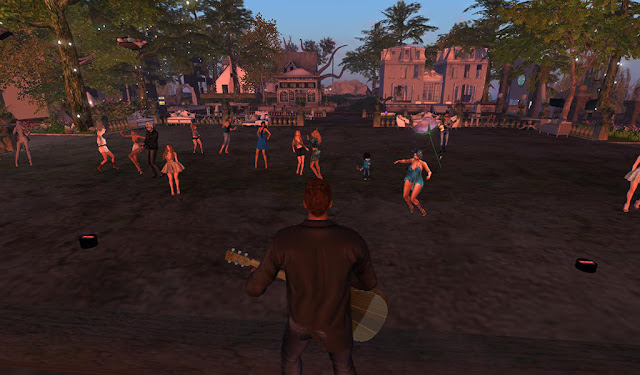 My view from the stage on Monday night at Serenity Gardens. I was doing a set that was mostly dedicated to and inspired by my friend Thea Dee. Photo by Triana Caldera.
Regular readers of this blog know that 95% of the time, my show reports go up the day after any of my live music performances. It's something I enjoy doing, and getting it done fulfills some slightly OCD-ish behavioral patterns I seem to have. But here we are, four days after my most recent show, and I'm just now getting to this entry. What gives?

Well, it's the most mundane of reasons: I got busy. One of my business clients was intent on doing a large web overhaul before their big trade show started, so I've been doing 12 to 14-hour work days this entire week. And then, on Wednesday night, I had a whole other type of obligation, one of the fun variety. We're going to actually talk about that event before going back in time to talk about my show. Doing things backwards is kind of my trademark, so with no further adieu...

Wednesday Night: Rehearsing with Liquid
Liquid is my old cover band that had its heyday in the 2000s. The band is comprised of Randy Harmon on vocals, Phil Gilbreth on bass, Dante Silva on drums, and me on guitar and backing vocals. We're all good friends, but then band had gone on infinite hiatus at one point, and it had been seven years since the last time we played live. Well, a year or so ago, Randy's younger daughter Megan requested that we get back together to perform at her wedding in October 2019, and the time went by and suddenly here we were, a month or so out from the date. We all felt it would be a good idea to get at least one rehearsal in before playing at event with 100 or so people there. So that's what we did; I met the guys at a rehearsal facility in Gardena called Grooveworks (nice place and reasonably priced... I recommend it), and we spent several hours on Wednesday night jamming through the whole set that had been chosen for the wedding. 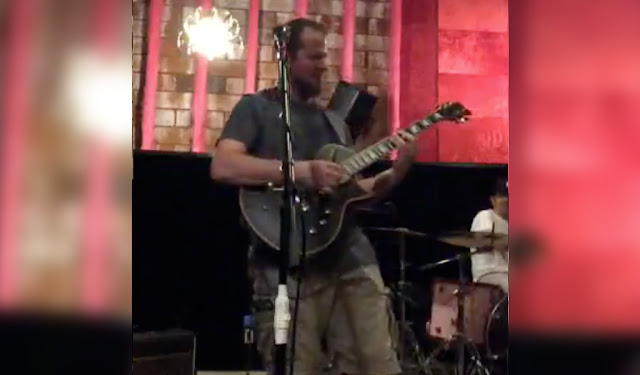 A still from the short clip I did on Facebook live during the first Liquid practice since our last gig seven years ago. I have no idea how long it will remain visible, but you can watch us feeling our way through a couple of tunes on Facebook here.
I was expecting to have a good time with those guys; I wasn't expecting the band to sound nearly as good as we did after all those years since we last played together. I was frankly astonished at how relatively tight we still were, and if you enjoy classic hard rock from bands like Bad Company, Queen, Van Halen, Led Zeppelin, Cream and the like, we're still a force to be reckoned with. The jam went great and I'm totally looking forward to the wedding next month (which will also involve a short three-day getaway for Kat and myself, being held up in Kern County at a facility near Lake Isabella).

Some Songs for Thea at Serenity Gardens
Let's get back to the actual topic here. As per my most recent post, I've been dealing with grief lately due to the loss of my close friend Rachael Emborg, known by many of you Second Life people as as Thea Dee. My show on Monday night at Serenity Gardens in Second Life, a place where she'd visited so many times to watch my perform, was my first live show of any kind since her passing, and I couldn't have possibly done the show without acknowledging her impact on me as a close friend.

So, when putting together my song list, I very purposefully included a number of tunes that had some connection to her. It genuinely felt good, in a cathartic way, to do that. Obviously, a number of the people who come to my shows were also friends of Thea, and it was a good opportunity, I think, for all of us to come together and acknowledge the importance of her presence in our respective lives and how much we'd miss that. 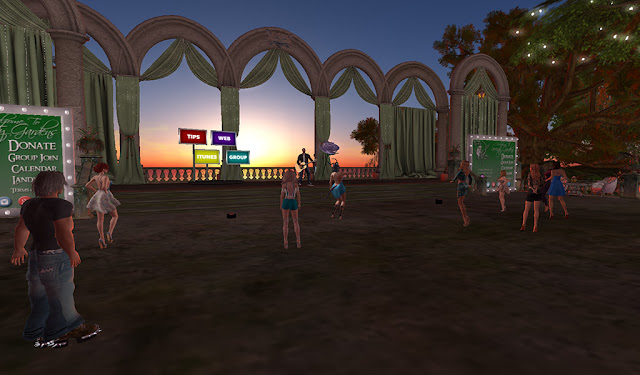 A lovely sunset and a peaceful time for songs for a friend. Photo by Trouble Streeter. 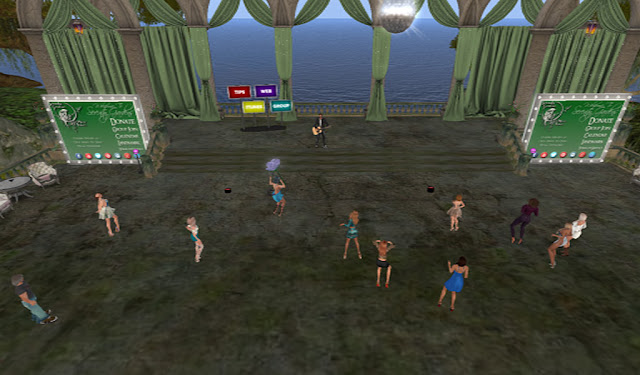 Serenity Gardens from above. Photo by Aurelie Chenaux.
Of course, me being me, I also felt compelled to make at least a slight fool of myself by attempting to perform the music of one of Thea's favorite bands, which seemed the right thing to do at the time. That band is Rush, whose repertoire I am very, very familiar with, even to the extent of having had a little Rush tribute side-project band when I was about 15 (we were called Permanent Waves). But at no point did I claim to be able to sing like Geddy Lee. Few can. Even Geddy himself isn't fully capable of singing like himself at this juncture. But for Thea's sake, because I imagined her laughing at my attempt to sing a good half-octave above my range, I did a couple of Rush tunes in the set, and I was happy to do so. I also did some songs I knew she enjoyed, and some that were significant to how I was feeling about her passing. All in all, I left the stage after my show feeling better than I had before getting on. That's a good sign.

One more thing I wanted to note: I've recently been contacted by some of Thea's closest friends, who are going to be putting on a special show in remembrance of her on Saturday September 28. I will be performing there, and I'll fill everyone in on details ASAP. 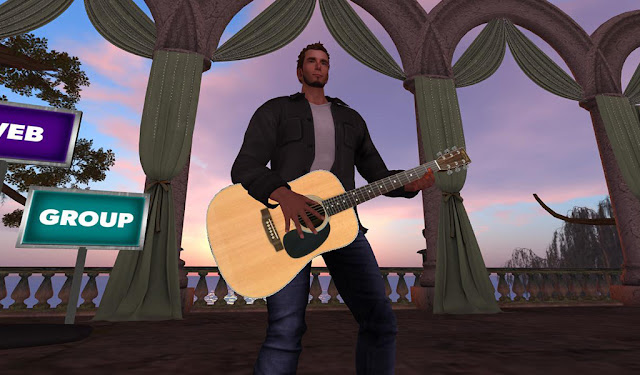 Me being me. Photo by Triana Caldera.
Serenity Gardens set list...
This Afternoon (Zak Claxton)
Wish You Were Here (Pink Floyd)
*Time Stand Still (Rush)
Time in a Bottle (Jim Croce)
Dead Flowers (Rolling Stones)
Blew the Dust Away (They Stole My Crayon)
Better Man (Pearl Jam)
Ashes to Ashes (David Bowie)
Things Behind the Sun (Nick Drake)
Tea in the Sahara (The Police)
Something Else (Zak Claxton)
Closer To the Heart (Rush)

Thanks to all who came to the show, and special thanks tot he following who helped support it!
AaronCabottJones Resident, Harley Wytchwood, Tyche Szondi, Triana Caldera, Kat Chauveau, Trouble Streeter, Nina Brandenburg, cia Beach, Aurelie Chenaux, my excellent manager Maali Beck, and the fabulous team at Serenity Gardens, Tilly Rose and Ilsa Wilde!
Posted by Zak Claxton at 2:09 PM