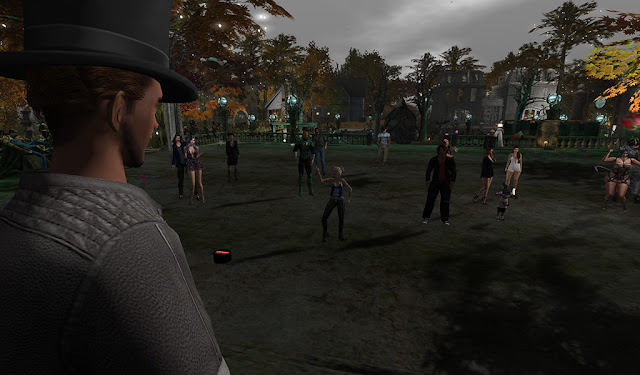 Getting spooky at Serenity Gardens. Photo by Kat.
So, knowing for quite some time that I'd be spending the weekend out of town and performing with my old band Liquid at a wedding, I was also aware that the day after my return, I had a show to do at Serenity Gardens in Second Life. It's my bi-weekly show that's been going on there for about three years every other Monday night.

So, before I took off on our little road trip to Lake Isabella, I quite wisely decided to not wait for my return to plan out my set list. As I've mentioned a number of times in the past, the one thing I hate doing is starting a show without a planned set list. There are plenty of Second Life performers who are comfortable winging it, or leave the choices of their songs to their audience and do their shows via live requests, and that's great for them and their audiences. For me, I prefer to think of it in the way a good radio DJ curates music that goes well together, or I base my set on a specific theme. For this show, since it's my closest one to Halloween, it seemed like a good idea to pull out my scarier songs. It's something I've done many times over my 13 years of playing music in SL... sometimes at a Halloween-specific event, and sometimes (like last night) at any random show in late October.

Spooky Tunes
What makes a song scary? It's a good question, and it delves into the aspect of how something as nebulous as music can impart emotion on its own, independently of the lyrical content. When you watch a horror movie, the soundtrack is a key element that heightens the tension of the overall experience. The kind of funny thing in that regard is that my instrument of choice, the acoustic guitar, has a sound that people tend to associate with warmth, friendliness, and happiness; rather the opposite of the terrifying sounds one can achieve with a synthesizer or an orchestra. So, for my Halloween sets, I tend to pick tunes that combine some aspect of scary sounds with those that have disturbing lyrical themes.

For non-musicians, or even musical performers who don't compose their own music, it's difficult to define why certain combinations of notes and rhythms and chord progressions are evocative of specific emotions. And yet, even a child can tell you if something sounds happy or sad, calm or tense, and so on. Many of these aspects are culturally based; what might sound frightening or sad in one area of the world could be joyous in another. I distinctly recall this being pointed out to me while studying music composition in college, when someone claimed that music in minor keys was "sad", and the instructor pointing out that a minor-key Russian dance is actually very happy. The same can be said of some songs in major keys that can be wistful, or sparsely melancholy. 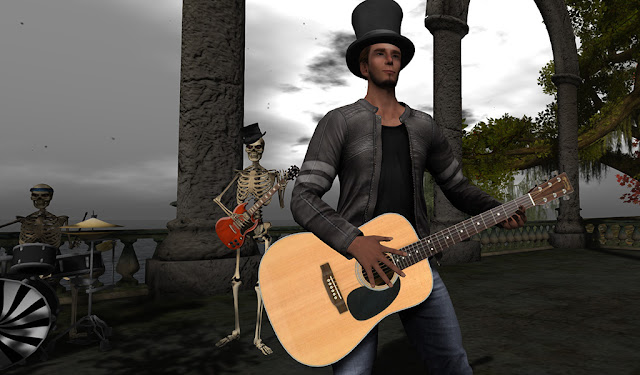 Rocking with my skeleton crew at Serenity Gardens. Photo by Kat.
So like many things in life, it's more complex than it appears on the surface. People who are super deep into music theory and composition can bore this down to a granular level, assigning emotional context to every single note interval or relationship between two chords. It's truly fascinating to get into, if you enjoy studying art from a psychological standpoint. Sometimes it's also okay to just play what you feel and allow the listener to react based on his or her own perceptions and life experiences.

A Good Show
I rarely have bad shows. As far as I'm concerned, if people come to see me and they have fun and I have fun playing for them, well... mission accomplished. I don't dwell on being pitch-perfect on every note I sing, nor do I beat myself up for missing a chord here and there. If people want perfection, they can listen to a well-produced album recording. My shows are live, and they sound live. Ultimately, I'm an experienced performer who, even on a bad day, can do a reasonably good show. But the fact is, some shows are better than others. When my voice is working and I'm not straining to hit notes, and my guitar feels comfortable in my hands, and the songs I've chosen all seem to come easily to me as I perform, I usually can recognize when a show is particularly good, which was the case last night.

I will say that the one thing that can utterly fuck up a show is technical problems, and I damn near ran into a huge one last night. As usual, I started warming up at 5PM, an hour before my show. Then, at about 5:30, I went to get into Second Life, and it was at that point that I realized my version of the Firestorm viewer had become outdated to the point that I couldn't log in. Uh oh. I immediately downloaded an updated viewer and did an install of it while the clock ticked away. When I relaunched the app, it just pulled up a white screen that seemed to stay unresponsive forever. This was not good. It was already well past the time that I usually arrive at the venue before my show. Finally, with about five minutes to spare, Second Life came back to life for me, and I quickly logged in and went straight to Serenity Gardens. Note to self... try updating before it's mandatory next time. 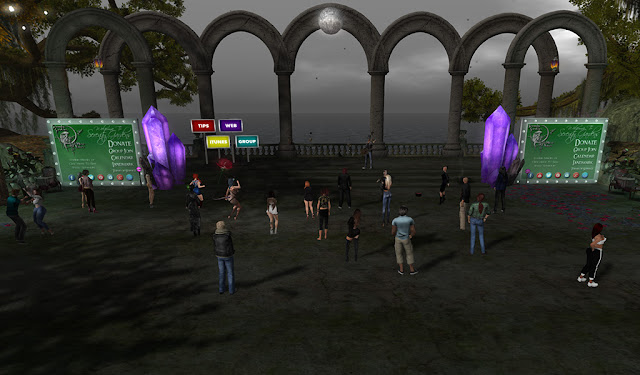 I was glad just to have made it through my Firestorm update in time to do my show! Photo by Kat. 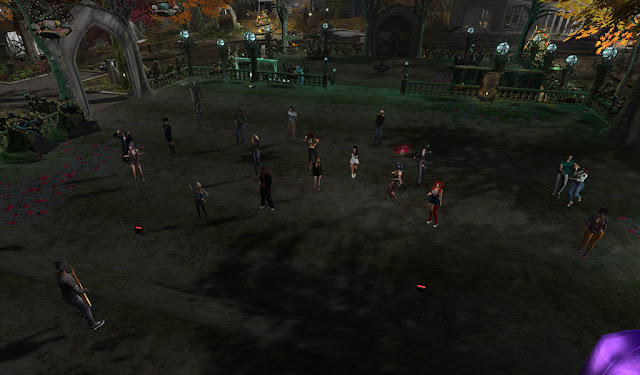 As usual, Serenity Gardens was exquisitely decorated for the season. Photo by Kat. 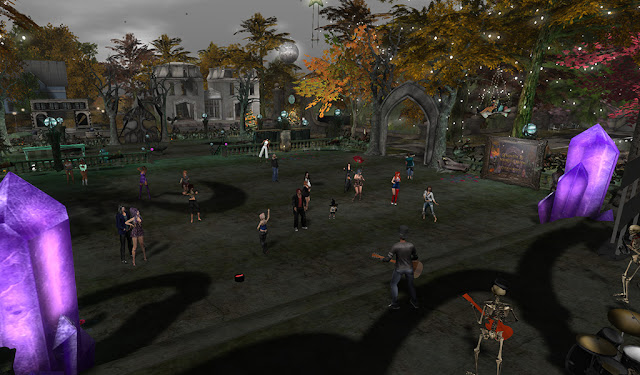 Scary tunes, good times. Photo by Kat.
But then, after that, everything was completely smooth sailing. Honestly, there are so many things that can go wrong with doing live streamed performances in an online virtual world, it's pretty amazing that 95% of the time, everything goes just fine and we don't even have to consider all the places where things can screw up. Maybe I'm just lucky in that regard, but it's been a surprisingly small number of shows where tech issues -- with my music gear, with my computer, with my audio stream, with SL itself -- actually stopped me from performing.

One note on the set list. Since some of these songs only get pulled out for Halloween-themed shows, there were a few of them that are extremely rare in my set. Several of the songs below have only been played once or twice in the past five years or so. I really enjoy any opportunity to surprise my audience with song selections. Many of them are terrific and loyal fans/friends who attend a ton of my shows (sometimes almost all of them), and pulling out a tune that they've never heard me do before is a good feeling... probably for all of us.