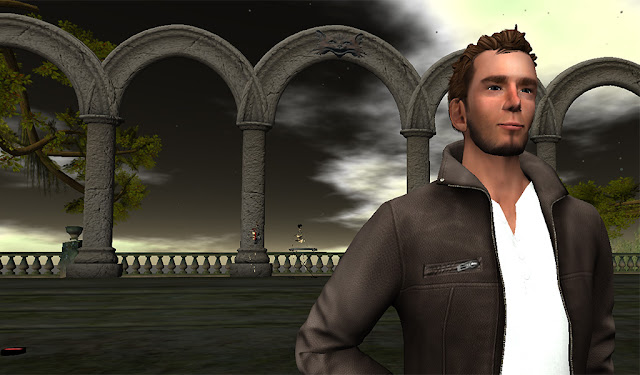 The observant ones among you might note that this show report is coming a full week after the performance of said show. Well, I wish I had a happier reason that this was the case, but I don't. Christina -- whom you Second Life friends probably know as Kat -- had a death in her family this past week. Her sister Tova was diagnosed with an aggressive form of cancer in the spring, and it's something that's been weighing heavily on us ever since. She fought the disease with all of her strength, using as much medical technology as was made available to her, but in the end it still wasn't enough. The cancer spread and on Thursday November 7, she passed away at age 38, leaving behind a husband and two young kids.

To say it's a tragedy isn't giving it enough credit in its terrible nature. Tova's passing is simply awful, and the only good thing I can say about it is that the end stage was thankfully short. On Tuesday of last week, she went into the hospital with breathing difficulty and heart rate problems, and Kat was able to fly up to Seattle that same day. I am very glad she did; any delay might have meant never seeing Tova again. Kat has remained up there since then, helping out with the various family members through both tangible issues and intangible grief.

I'm not here to write a big memorial piece about Tova. Eventually, I'll use my skills as a video editor to help put together a memorial piece for her husband and kids to have, and in a couple of weeks I'll be heading up to Washington to attend a memorial event being planned. As some of you will recognize, Tova's passing is remarkably similar to that of my friend Rachael just a couple of months ago, and frankly I am really sick of cancer robbing me of the company of these people who I love. Like Rachael, Tova will be missed by many, and as anyone knows who's been through the death of a loved one, grieving takes time... but at some point, you have to allow yourself to continue your own life as the person would have undoubtedly wanted. Rest in peace, Tova. You were a good person who made the most of the time you had... none of us can ask for more than that.

Hanging with Tyche
As you can imagine, it was a pretty rough week all around. The same day that Tova passed away, I suddenly realized that my friend from SL, Tyche Szondi, had come to the Los Angeles area to attend a conference, and months ago when she'd planned the trip, I'd told her that we'd hang out while she was in town. Tyche and I met in 2016 at the Twin Cities Jam and I immediately knew she was the type of person whom I enjoy hanging with. She's funny and bawdy and basically gives no fucks. On Friday, I'd been kind of set on telling her that with all that had been going on, I wasn't exactly up for having fun... but then Friday evening rolled around, and I realized that what I needed was exactly that; the opportunity to take my mind of all the shitty stuff in life and just chill and have a good time with a friend. 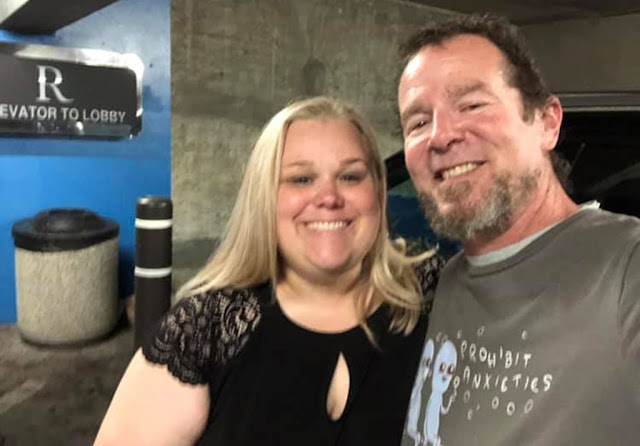 Tyche and I in the parking garage as I was getting ready to roll back to Redondo.
Tyche did not disappoint. I grabbed her from her hotel near LAX, and then we headed a short distance away to the nearest In-N-Out Burger, where she tried her first Double-Double (verdict: "Oh hell yeah, that's a good burger!"). She laughed at my expert analysis of In-N-Out's starchy french fries when I described them as being "too potatoey" for my liking. After dinner, we went back to her hotel and hung out while she regaled me with stories from Second Life. I pay so little attention to various aspects of the music and social scenes there that it was fun hearing various tales of our mutual friends and acquaintances. We ended up hanging out and talking for a couple of hours (and I could have done so all day long if we'd had the extra time), and I felt better after that than at any previous point in the week, so hats off to Tyche. Having friends is important, and finding the time to spend with them is something all of us should do when we can.

The Show: Rocking the '70s
Back to my show. A week ago, when I did my most recent show at Serenity Gardens, it was the first weekday morning of the return to Standard Time from Daylight Saving Time. The fact that I'd had to set my clock back got me thinking; what if, instead of an hour, I set the clock back some 40+ years? That silly concept allowed me to come up with a theme for the show, in which every song I did was from the decade of the 1970s.

I was unable to get any photos at this show; Kat's computer was going though a multi-day repair cycle at the time, and most of the regulars in my crowd who might have snapped some pics weren't able to make it to the show. I didn't even consider it until afterwards, or I would have taken some of my own. But no big thing; we had a great crowd, and it seemed that everyone enjoyed the tunes. Also, my voice and guitar were both behaving nicely, and as I am wont to do, I threw in a song I hadn't performed before and that, too, went well. I have no complaints about the show at all.

Big thanks to all who came out to my '70s Show -- your presence there is what matters! -- and huge thanks to the following folks who helped support it!
AaronCabottJones Resident, Tyche Szondi, Jakbnimbl Riddle, Maurice Mistwallow, Alex Zelin, Pato Milo, Magnus Hoch, Nina Brandenburg, Skeat Abonwood, Grace McDunnough, my excellent manager Maali Beck, and the fabulous team at Serenity Gardens, Tilly Rose and Ilsa Wilde!
Posted by Zak Claxton at 1:57 PM