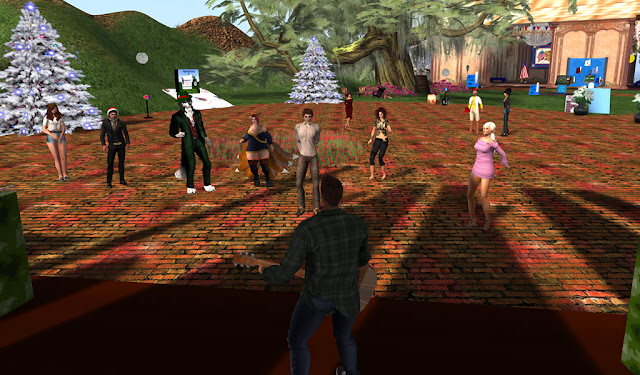 Getting my holiday show for Homes For Our Troops started at Veterans Isle in Second Life. Photo by Kat.
Life is funny. When you're young, you think you have an idea of what it means to be "grown up". You associate it with things like being independent, responsible for your own needs and perhaps supporting a family and so on. And even as time goes by and you get older, there's no guarantee that at any specific point, you'll truly think of yourself as being a mature adult. You can have a job, have kids, buy a home, drive a nice car, any of those things that you recognized as being part of the process of being an adult, probably based on how you saw your parents and other older people who were influences on you.

However, I've found that there are steps beyond the things I mentioned above that allow you to start getting an understanding of what maturity is all about. I think that you truly have matured when you start spending your time and effort in making a difference in the world beyond the things that are your immediate personal priorities. It's 100% understandable that you give most of your focus on the actions you take to keep yourself and your loved ones happy and healthy and successful. No one would argue that. But as time goes by and you find that you are capable of doing those things, you hopefully realize that you are capable of more. 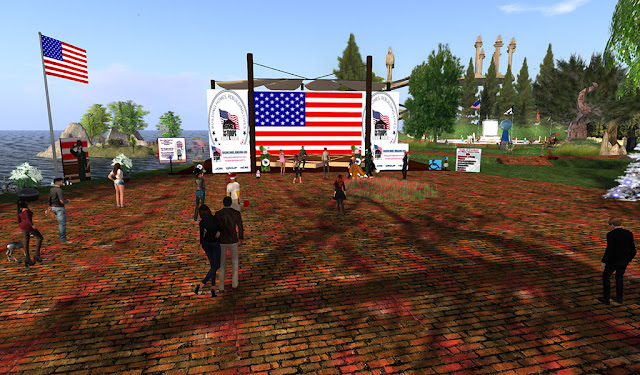 Photo by Kat.
One nice thing that performing live music in Second Life has given me is the opportunity to do just that... help others beyond myself and my family and friends. I can do this things because I am aware of and appreciate that I've been very fortunate to be in a position that I am able to take care of my own needs and still find that I have room to try and help others. Not everyone is in that position. But since I am, it's important to me to try and use whatever extra level of effort that I have to try and give back to the world in various ways. Second Life has provided a very convenient way to do that, in many different areas. I believe my first kind of charitable show was for the Relay for Life organization for the American Cancer Society, who has long held SL-based fundraising events. I've done plenty of other since then... shows benefitting the National Kidney Foundation, animal shelters, personal fundraisers for people facing various serious illnesses or tragic circumstances, and of course the Feed-a-Smile charity for school kids in Kenya. I've done multiple benefit shows for each of these and more. But to some folks, perhaps the most perplexing of the causes I support with my music is the Homes For Our Troops organization.

Peace, Love & Understanding
I've done many shows for HFOT in Second Life. At least a couple of times each year, Frets Nirvana asks if I can be a part of his monthly fundraising shows, and I don't think I've ever turned him down. Why would a person like me, who is utterly opposed to violence and military conflict, interested in supporting such a cause? I'd think the answer would be simple, but I'll say it anyway.

If someone is sent into an area in conflict and is severely injured, the top priority should be to ensure that those people are well taken care of upon their return. Sadly, that has never proven to be the case in America. More than 10% of our country's homeless population are military veterans. For those who make it back and are lucky enough to have a place to live, it is often not fit for the challenges they face via the injuries sustained in protecting our country.

I appreciate many things about about Homes For Our Troops. First, Charity Navigator gives HFOT a score of 91.69/100, meaning that they are very transparent with their fund distribution and that a huge portion of the money raised goes straight to those in need. I am always careful to support causes where the charity itself doesn't take an inordinate percentage of the funds as "operating expenses". Consumer Reports lists Homes For Our Troops as one of the highest-rated veterans charities in the country.

HFOT has a very specific mission... "TO BUILD AND DONATE SPECIALLY ADAPTED CUSTOM HOMES NATIONWIDE FOR SEVERELY INJURED POST-9/11 VETERANS, TO ENABLE THEM TO REBUILD THEIR LIVES." In 2019, the organization built 18 custom homes for these deserving servicemen/women. When I think about the idea that through the efforts of people like Frets, and my small part in joining him a couple of times per year to strum my guitar and sing a little and help raise some money... sure, it's a drop in the bucket, but every drop adds up. If you ever find yourself wondering if it's worthwhile... well, look at these folks and you tell me.


Christmas Songs
One other thing I want to mention. I generally have a few shows in the holiday season, and obviously it's the only time of year where I can do certain holiday-themed songs. They don'e go over so well when you pull them out in August. However, I ran into a bout of bronchitis this year -- not unusual for me in December, I should add. So my show last Monday had no singing at all; it became a story hour instead, which was fun. But when I found out I was performing on December 22 for the monthly HFOT benefit at Veterans Isle in SL, I knew that would be my one shot to pull out all the Christmasy musical goodness, and so I did. I didn't do an entire hour-long show of Christmas music; I know that people get burned out on that music, especially after hearing it basically daily for weeks. Instead, I mixed up some holiday tunes with some others that just had a good vibe for the event.

But I will say that while I do some Christmas songs in a super traditional way, I also try and throw my own arrangements together for certain tunes, and I really enjoy taking a well-known song and making it a little more my own, which I did for a couple of the songs I performed. And one last note: if you find yourself with an opportunity to use whatever talents you have to help other people... I can't advise you highly enough to do so. It feels great, and you will be aware that you've transcended into a new level of humanity. Think of it as "leveling up" in the video game we call life. 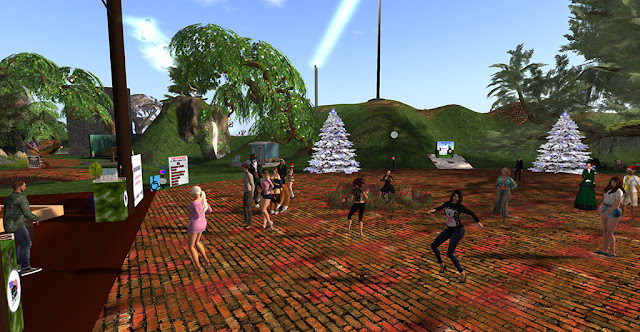 Huge thanks to each and every person who came by my show at Veterans Isle, with special thanks to the generous people who helped to put on the event and those who gave to the cause. You are all heroes!
Posted by Zak Claxton at 12:25 PM