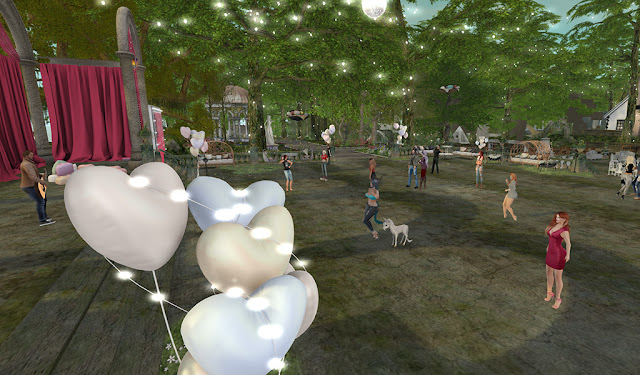 Rocking on a Monday night, as I do every other week at Serenity Gardens in Second Life. Photo by Kat.
It's pretty rare these days that I happen to have live music shows on consecutive days, and on a general basis, it's not something I prefer to do. The reason is rather murky, but it mostly has to do with the fact that I really like to prepare well for my shows, carefully choosing my set list, going through and warming up for each song. It all takes time and energy, which are two things that I generally don't have in abundance these days. Since I'd played Sunday evening for the MrNoCal Memorial at Triana's Music Trivia, I found myself onstage less than 24 hours later for my bi-weekly show at Serenity Gardens.

But there's an upside to doing live shows on a more regular basis, which is that I can kind of stay in a groove, feeling warmed up and ready to rock with both my voice and my guitar. As I got ready to play, there was no strain in hitting notes on the high or low end of my vocal range. My fingers jumped to each chord as if they were born in those shapes. Don't get me wrong... I get to that point eventually for most of my shows, but it felt particularly easy to hit the ground running for this one. Feeling like that gave me a big boost of confidence, and that, in turn, let me jump into the start of this show being about as good as I can be, and it stayed that way for the subsequent hour.

To be clear, I still don't want to do more shows than I currently do. My life is filled with things to do. There are never enough hours in any day to do all the things that I have to do, much less the things I want to do. There are so many things to know, to learn, to experience. I don't get bored; how could I? But that still leaves me with no desire to fill up my calendar with music shows, in Second Life or otherwise.

Life... Take Advantage Of It
I sometimes imagine myself as a character in a fictional narrative called "Things to Do While You're Alive". Go with me on this pitch... you wake up one day and you're dead. You start asking around about the afterlife, and you find there are plenty of things to do. You can travel through vast distances of time and space, unencumbered by the physical laws of our universe. You can meet other beings in this new realm and get to know them. But what you find in the midst of this amazing new dimension is that you miss the things that you can only do as a living, breathing entity. Your regret is that you didn't take advantage of being alive while you were alive.

Don't laugh; I think this could be a decent book or film. But you get the idea; by having some awareness that you only have the limited, relatively short span of your life to do all the things you enjoy, you might be inspired to get off your ass and do those things, or take some chances that you otherwise might be scared to do. What those things entail are, of course, different for each person. I seem to see so many cases of people who always want to take the safest path, the one with the least amount of risk, and I can't help but feel that they might experience some regrets about the things they didn't do while they were capable of doing so. Why not take up that instrument, or ask that person out to dinner, or travel to that place you always wanted to, or devote time getting behind a political cause, or writing that book, or building that web site, or... whatever the thing is that you'll wish you'd done later on? I rarely am regretful of the things I do, as opposed to the things I don't.

Back to the Show
So, I was feeling nice and confident when I hit the stage at Serenity on Monday night. Grace McDunnough had just done her typically excellent set before me, and everything just worked. We had a reasonably good-sized crowd the entire time, and I felt like my set list was super strong. I often arrange the songs of my set in a particular order before a show, and I have reasons for some of my choices. For example, I don't like to have my opening song be one that's particularly challenging to sing, and yet I do want it to be something that might work for the kind of venue I'm playing, or after the artist who performed before me. But after the first song or two, I'm constantly shuffling my tunes to match my mood, or to plan ahead for how I want the set to wrap up given the vibe of the evening. Last night, I ended up pushing my three most rocking tunes toward the back of the set list, when I'd be nice and pumped up to do the harder-edged stuff.

I also found out during my show that it was the fifth anniversary of Serenity Gardens, and that gave me a chance to talk about what a terrific venue it truly is. It's been going on three years that I started doing my regular show there, and I can say with no reservations that it truly is one of the best-ever places in Second Life to experience live music, primarily due to the warm and welcoming nature of the owner and hosts, the low-key and non-judgmental vibe of the outdoor setting, and the fact that a wide variety of music is performed there, so there's something for everyone. In any case, happy fifth anniversary to Ilsa and Serenity Gardens! 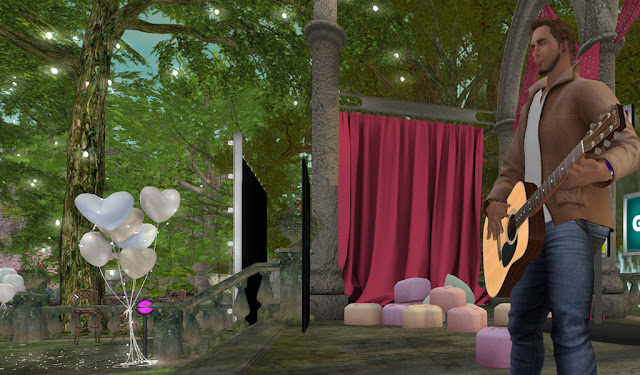 Me, onstage in a pretty setting. Photo by Kat. 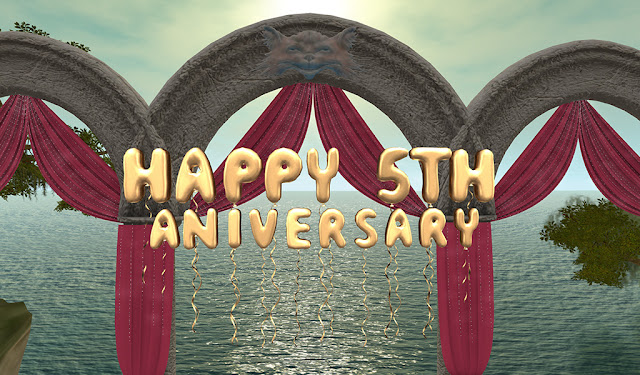 Out of my 13+ years of doing live music in Second Life, my shows at Serenity have been among my best anywhere. Happy 5th! Photo by Kat. 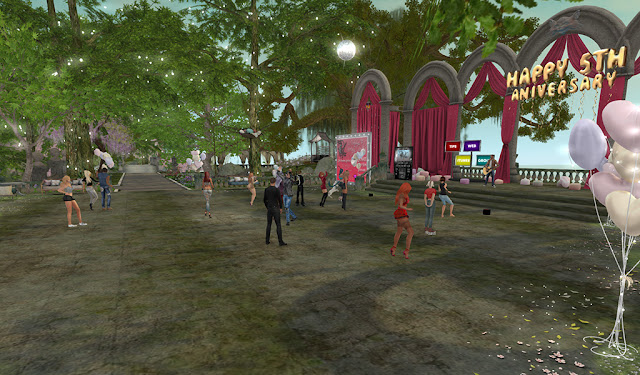 Good times, good crowd of people who really seemed to enjoy good music. I ask for nothing more! Photo by Kat.
Anyway, as I said up top... it is sometimes a temptation to play live music more often than I do in Second Life, or anywhere for that matter. But at the same time, my days are really full and I make it a point to live my life in a way that means I have few regrets at the end of it... or afterwards. That often means doing lots of things, but not focusing all your time on any one thing. That's what works for me... you might feel differently, and that's okay too.

*Indicates the first time I've done this song in SL.

Big thanks to all the folks who came out to the Zak Show, with special thanks to the following who helped support it!
AaronCabottJones Resident, Diana Renoir, ColdAsh Resident, Tpenta Vanalten, Kat Claxton, go2smoky Resident, Trouble Streeter, Asimia Heron, patchworkpink Resident, Grace McDunnough, my excellent manager Maali Beck, and the fabulous team at Serenity Gardens, Tilly Rose and Ilsa Wilde!
Posted by Zak Claxton at 1:15 PM