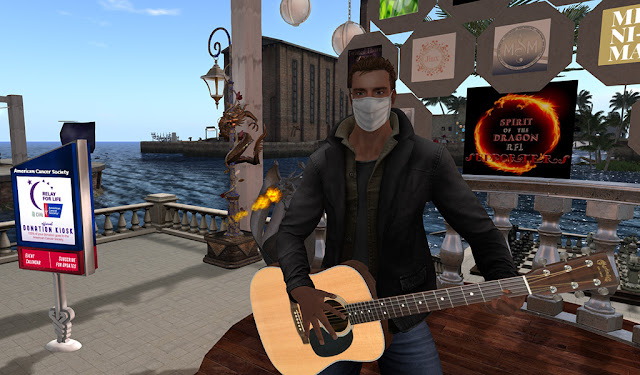 Why do I wear a mask in the safe pixel-based world of SL? Because protecting against COVID-19 is serious shit and I don't mind being a walking reminder for everyone, even during an RFL benefit at the lovely Spirit Gallery. Photo by Kat.
I've written many times about how giving back to the world at large via my music has long been an important component of my overall life as a musician. It's also hopefully something that happens in every person's growth as a human being, ideally. Your youth is about getting yourself figured out, and then you likely go through a selfish phase where your biggest concern is only about yourself and the people closest to you. There's a next level of human development that you reach when you start to devote yourself to the world at large, and that's the feeling I get when I do things like perform fundraising shows like the one I did yesterday in Second Life at The Spirit Garden for Relay for Life.

What Is Relay for Life?
Relay for Life is the community-based fundraising arm of the American Cancer Society. As the name implies, the event started as an actual sponsored walking/running event, but it's also expanded into many forms of fundraising over the years. The virtual environment of Second Life is perfect for RFL in that events can be run for people to easily attend from around the world. Even though Second Life is a microeconomy, those little donations all add up; it's said that millions of dollars have been raised since RFL events started in Second Life in 2005.

My Show at The Spirit Gallery
I've done a bunch of RFL shows in SL over the years, and it's always difficult to predict what attendance will be like. I was a little concerned when I was about to start my first song at yesterday's show and could count the people there on one hand. Obviously, playing a fundraising event is only really worthwhile when you draw enough people to actually... raise funds. But after a little while, we had some more people coming in an congregating, and presumably donating to the many kiosks located around the sim.

I should note that The Spirit Gallery was a nice-looking place, and I plan on going back sometime to explore the space some more. As usual, it was my manager Maali Beck who booked me for the show, but I know it was done via the team of Kammie2 and Darkstone Aeon, and I've done a number of RFL shows for them in the past. It's always a good feeling to devote some time and energy to do a show where you know there will be a direct benefit to people who desperately need it. 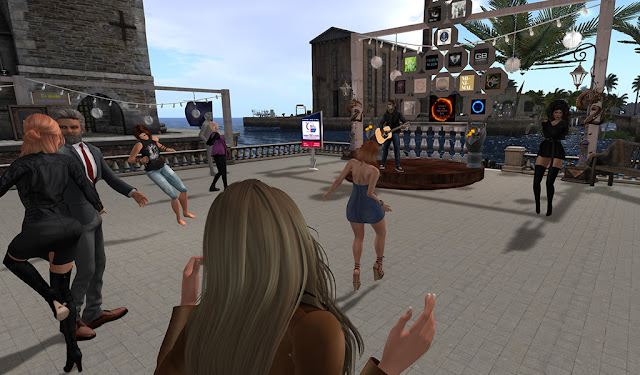 I think people were having fun despite the nature of the show. Photo by Kat. 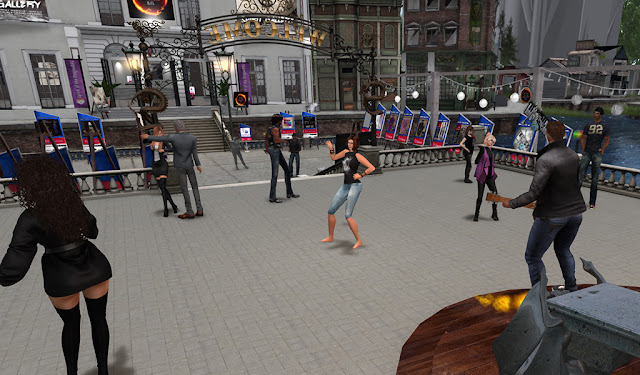 People enjoying the Zak tunes and helping to cure cancer... that's a good thing to do on a Saturday afternoon. Photo by Kat.
One note in that regard, which I mentioned at the show... we're in the middle of a pandemic that's affecting the whole planet, so why bother focusing on cancer right now? It's very simple. Not only are cancer patients more likely to have severe results if they get infected with COVID-19, but those medical resources that they rely on are being used to help fight coronavirus. In other words, there's never been a more important time for RFL and the funds it raises. I marked the occasion by throwing in a couple of songs I hadn't done before. A funny side note: there are some songs I've literally only done once, and whoever was around to hear it that time become the only ones who ever do.

Huge thanks to everyone who attended the show and gave so generously! You all made a difference in someone's life, and on their behalf, I thank you.
Posted by Zak Claxton at 3:42 PM