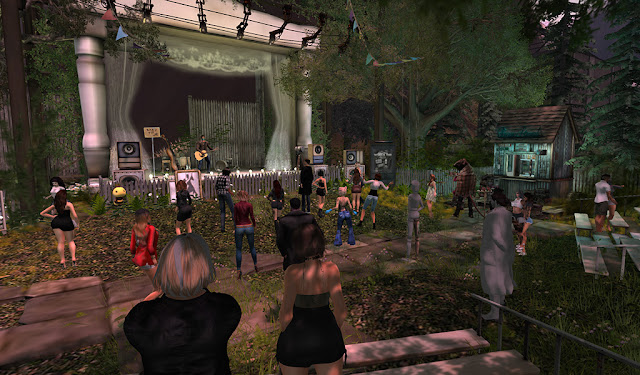 It's always a special and amazing experience to perform at Templemore. Photo by Kat.
It had been just over a year since my last show at Lutz City of Templemore, back in May 2019. For all the reasons you already know, it feels like a lot longer than one year. The past two months feel like several years already. But apart from all that, Templemore only has live shows very sporadically, and whenever I get the invitation to perform there, it's a big honor... something I mentioned very sincerely a couple of times during yesterday's show. Because a show at Templemore is such a rare and special occasion, I always prepare a set list that's a step apart from the ordinary, and we'll get to that in a bit. First, as I always seem to do, a few words on Templemore itself.

A One-Of-A-Kind Experience in Second Life
Even if you're not a person who looks deeply into the details of design, you might visit Templemore and still be in awe of the overall look of the sim without really understanding what makes it a one-of-a-kind place in Second Life. But there are two aspects of Templemore that are consistent throughout: decay and facade. It's seems oddly specific... the idea of, perhaps, an abandoned space that even when new was more of an illusion than based on reality. Overrun with vines and weeds and rot and rust and fading painted surfaces, you'll see buildings and various objects that are merely stage props, as if you'd wandered into a location that was used for a film set or stage show from decades ago. The scaffolding has been left up, various items strewn about as if the original owners had left in a hurry... it's completely mind-blowing that Luis chose this particular school of design for this magical virtual place. 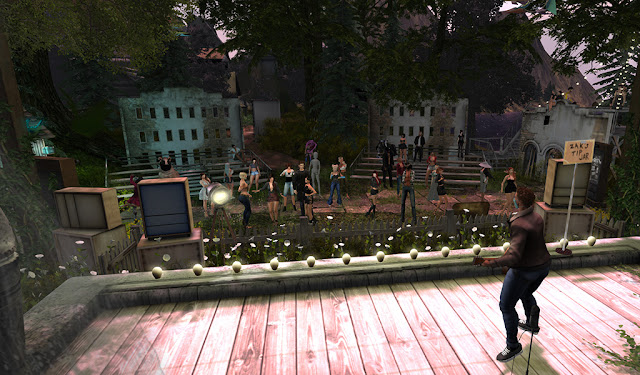 My view from the outdoor stage at Templemore. Photo by Kat.
Or perhaps, with Luis' real-life background in event production and stage design, it's natural that he'd have a viewpoint that few others would even consider, much less render so well. But I've said it before and I'll say it again: there are many amazing environments in Second Life, but few that have been so visually enthralling to me. Mind you, it comes with a price; it's definitely a test of the power of your computer's graphics card, with so much to render and interact with. While seeing the place in its full high-resolution glory with all the shadows and particles in their proper place is something everyone should do at some point, in order for me to function as a performer there, I really dial graphic settings down to minimum so I can at least move myself on and off the stage. When I'm there, I have a job to do, and hopefully my live music soundtrack adds to the overall vibe of the place. 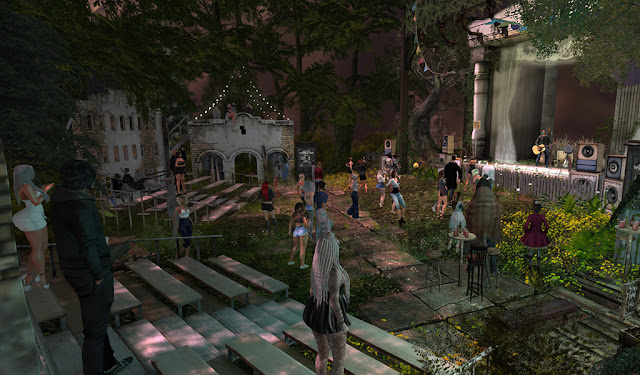 As great as many of them are, live music venues in SL really don't get any better than this. Photo by Kat.
Different Places, Different Tunes
There's something I've always done in SL that I think some other artists do (and many don't). Since I don't take song requests, it's always up to me to curate a batch of music before my show, aka preparing my set list. And yes, there's an element in my choices based on what I feel like playing, or how my voice is feeling and what I think I am most capable of playing at that time. However, there's also a big aspect of the venue itself driving my choices. With Templemore, I have two guidelines for the songs I choose. First, I have an awareness that Templemore's crowd tends to be a bit more adventurous in their tastes than many other spots in SL. Don't get me wrong; there's nothing at all wrong with performing more familiar popular tunes. I do that stuff fairly often at other places. But at Templemore, I really do have the faith in the audience that they'll be into stuff that's much more esoteric, even if it's their first time hearing it. The second personal rule at Templemore is something I do in tribute to Garrett Lutz, a Templemore friend and regular attendee of my shows there until he passed away in August 2017. The sim was renamed in his honor sometime afterwards. Garrett was the only person in SL who let me know that they were a huge fan of Sun Kil Moon, a band I cover pretty regularly, so I make it a point to always do at least one Sun Kil Moon song each time I play there in his honor. 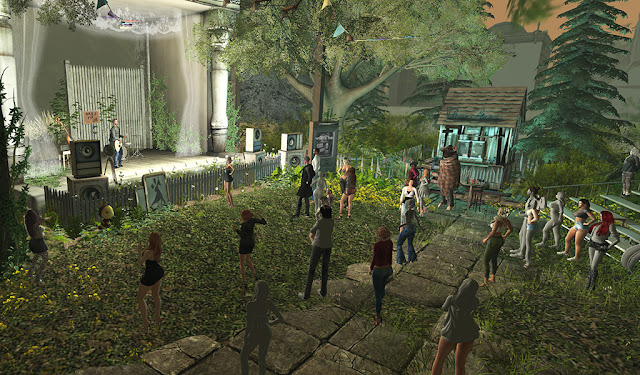 Playing some music in honor of Garrett Lutz. Photo by Kat. 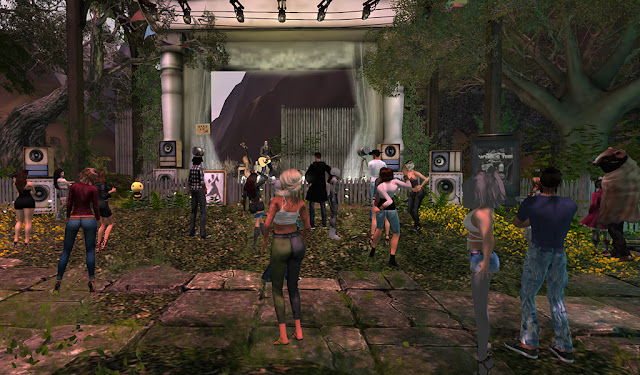 Great crowd, very engaged and into the music. Photo by Kat.
Additionally, Templemore is a place where I've historically debuted new songs, or at least songs I've never performed in SL before. Many of these songs end up becoming regulars in my set lists at subsequent shows. It's not that I'm hesitant to do new-to-me tunes at other places; it's just that I know how much they'll be recognized and appreciated there. Each time Luis reaches out to book me for a Templemore show, pretty much the first thing I do is start thinking of what song(s) I'd like to add to my repertoire for the show. This show was no exception (see set list below). 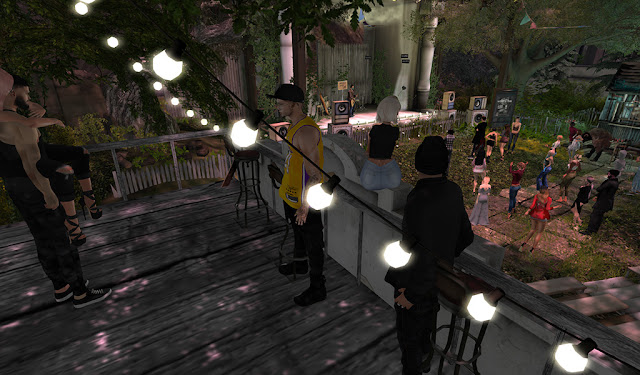 At every Templemore venue, there always seems to be a VIP area somewhere. This one rightfully has Gravey, Luis and friends chilling during my set. Photo by Kat. 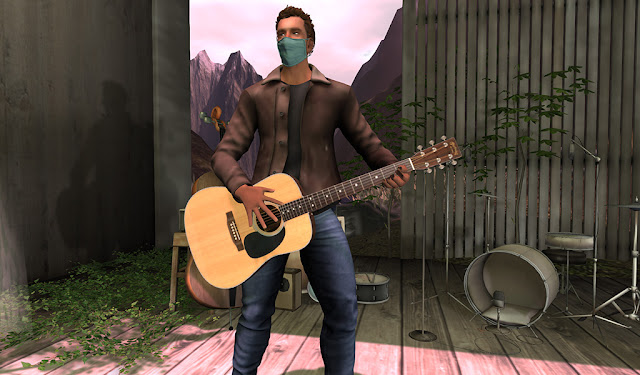 As I've mentioned many times, I will continue to wear a mask in SL for as long as it's necessary to wear one in reality. More than most folks in the virtual world, my pixel self generally reflects almost every aspect of my fleshy life. Photo by Kat.
Great SL Musicians
Without fail, when I perform at Templemore, I've found myself on a bill with other musicians who are among my personal favorites in Second Life, and yesterday was no exception. The show kicked off at 3PM with J Lively, followed by my set at 4PM, and then consecutively, it was Oblee, Gravey Jones, and Parker Static. I know these things are a matter of subjective taste, but I can say without hesitation that these are among the best performers in all of SL, and I know the feeling is mutual among these artists. While chilling during Oblee's spectacular set after mine, he mentioned something about being honored to be playing between two "legends" (aka myself and Gravey), and while I've never thought of myself as anything really special as a performing musician in SL or otherwise, it does feel good to get that kind of validation from a fellow artist. 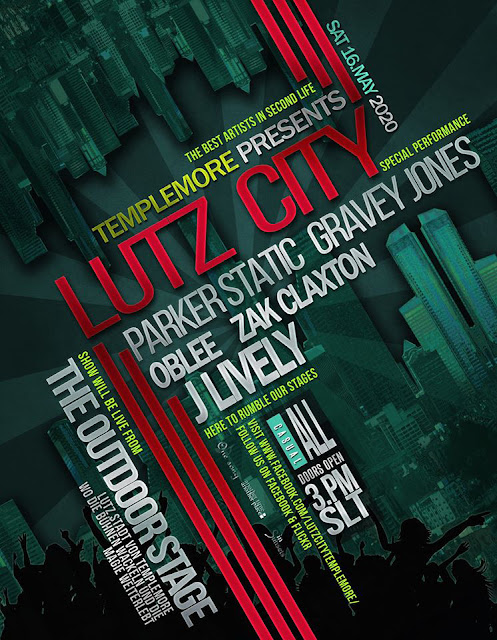