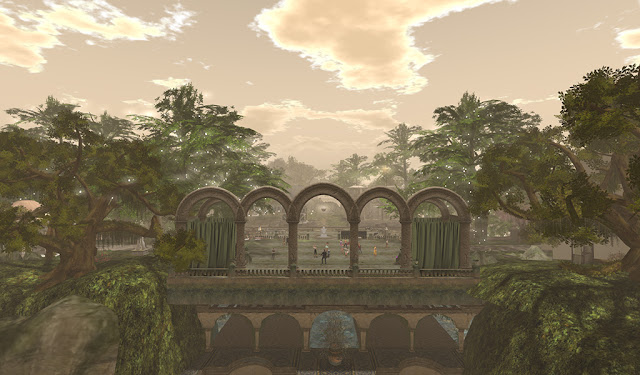 Beautiful Serenity Gardens, from a vantage point I never get to see. Photo by Kat.
It's funny; I have a number of good friends who are fellow Second Life performers, and it's not atypical for some of them to do multiple shows a day, almost every day. There was a time, some ten years ago, where my typical frequency of shows was 3-4 per week, every week, and that felt like a lot to me. The rare occasions where I had multiple shows in a single day seemed horrible to me. So the fact that I did two shows in three days... Saturday at Templemore and then Monday at Serenity Gardens... felt rather excessive compared to my relatively lackadaisical frequency of performances. But I was happy to do these two shows, which both went very well in their own ways, and musically, they couldn't have been more different.

General Update
Before I get into the show, I thought I'd do a little "State of the Zak" report. We are, after all, in the midst of "interesting times" as they say, and I am pretty sure that, assuming I survive for awhile, I'll be looking back at posts from this time frame years from now.

The current global statistics for COVID-19 are pretty awful, despite the best efforts of various countries to keep it under control. At this moment, the statistics read as follows: 4,946,171 cases worldwide, with 322,579 deaths. In the USA, the numbers remain grim... 1,558,175 confirmed cases, and 92,478 deceased as a result. And yet, the current big matter of controversy is in regard to re-opening society and business, trying to get back to what was previously considered normal. 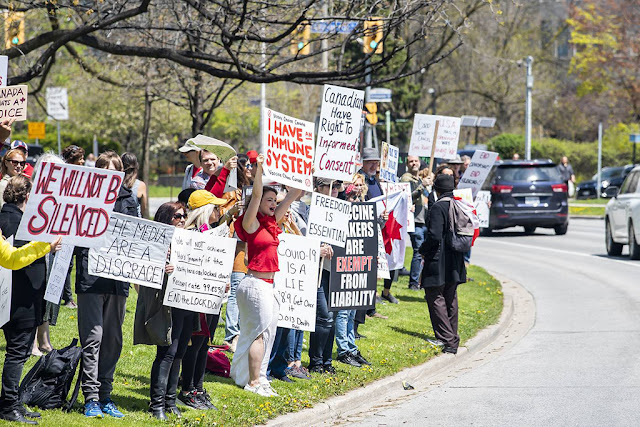 Just in case you assume that idiocy is a trait limited to Americans, I present some Canadian anti-quarantine protestors. Interestingly -- and predictably -- there has been a noted rise in COVID-19 infection rates in places that have had anti-lockdown protests.
My advice, for what it's worth, is that "normal" as we knew it before the current coronavirus pandemic, will never be back again. Yes, there will be effective treatments and vaccines eventually. But the process of going through this has already changed us. The old adage, "You can't go home again," applies here. The places you will return to, be they offices or gyms or hair salons or beaches, will be populated by people who are different than they were before, and that includes you.

Don't Let History Repeat Itself
Meanwhile, as per above, the act of protecting society from this pandemic has already become a huge polarizing issue in the USA. Perhaps one thing we can learn from history is to try and not repeat the bad aspects of it. One of the major pandemic events in this country was the influenza outbreak of 1918/1919. Known erroneously as the "Spanish Flu", this outbreak of the H1N1 virus is one of the most deadly in human history, having infected 500 million people (about a third of the world's population at the time), with a death toll between 17 million to 50 million, and possibly as high as 100 million. The reason it was so deadly wasn't because of the disease itself, but because of the aspects of malnourishment, overcrowded medical camps and hospitals, and poor hygiene at the time, which led to bacterial superinfection.

We've come a long way since then, both in terms of medical science and the living conditions that most people enjoy. But one thing you'll notice on the historical chart below are several distinct waves of mortality in the 1918/1919 outbreak. The worst one by far happened a good five months into the epidemic period. The reason -- which should sound very familiar to people of today -- is that there was a premature push to re-open society and business. People were angry about being told to wear masks in public; San Francisco had an "Anti-Mask League". Also, churches were particularly vocal about being forced to close, saying that the state had no right to prevent people from worshipping as per their constitutional rights. 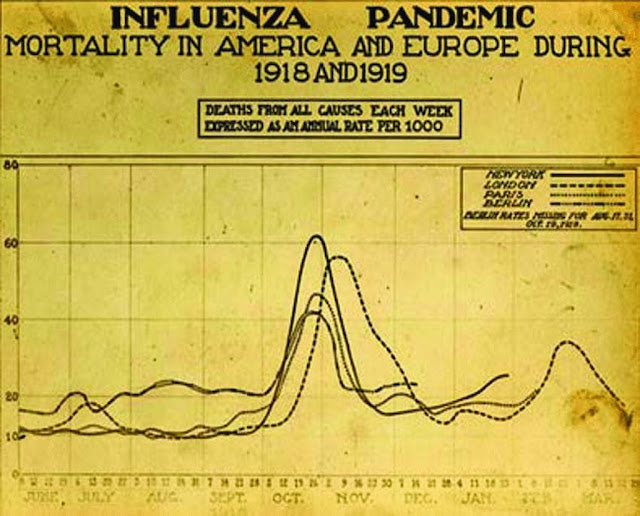 A mortality chart from the 1918/1919 influenza pandemic. Note what happens about five months in, as restrictions were eased and people got back out in public again. Let's hope that's not the result this time around.
So, politicians caved to public pressure, as they tend to do, and the results speak for themselves. The grand majority of deaths happened after the initial period of re-opening, and that necessitated another longer and more strict period of quarantine. It's why the pandemic lasted from spring 1918 all the way through summer 1919. On a personal basis, I find it interesting that the same type of influenza A (H1N1) that killed millions of people 100 years back was the one I ended up getting in the outbreak of 2009. Trust me, it was awful, and I was an otherwise healthy 39-year-old man at the time. It's my goal to make it through the entire pandemic on the sidelines, and never acquire COVID-19 (at least until there's a proven cure).

Speaking of me, I'll be continuing to take precautions against COVID-19 infection for a long time to come. I really don't anticipate any situation for months and months where you won't see me outfitted in a mask when I'm outside the house. I really don't care at all what any other person's opinion is about that. I'll keep protecting myself and my family as long as I feel there's the slightest possibility that we'll contract this disease.

Back to the Show
It's always important to me to not bore my audience, many of whom come to every one of my shows. Because of that, I not only switch up the songs from show to show but also switch up the entire vibe of the show based on the music I choose to play. For this show at Serenity Gardens, I really made it a point to do a big departure from the previous show on Saturday, so most of the music I played was stuff that is very familiar and beloved by people. That being said, I also pulled out a number of songs that don't find their way to the top of my set list very often. 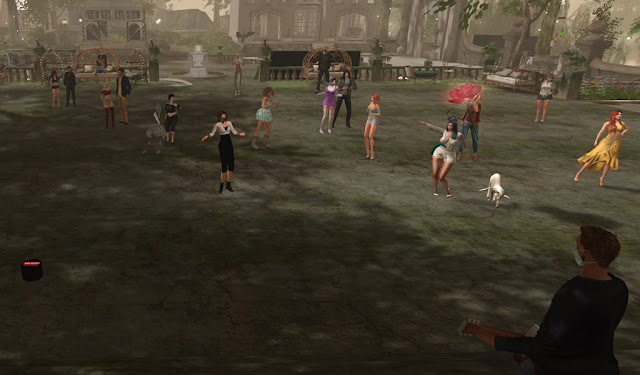 I can't be sure what song I'm playing here, but I imagine it's probably "Pickles", my current ridiculous hit song in SL. Photo by Kat.
I do want to note that seeing one particular audience member really kind of made my whole night. As my blog readers are aware, I used to perform pretty regularly at a venue called The Islands of New England, and those shows were hosted by a woman named Christine Haiku, who in turn became a good friend over the course of time. For personal reasons, Christine decided to depart from Second Life a couple of years ago as people tend to do from time to time, so when I started my show and looked into the crowd, it was fantastic to see her there. Overall, while we didn't have a giant crowd last night, everyone there was engaged and seemingly really into the music, and that always makes me happy. 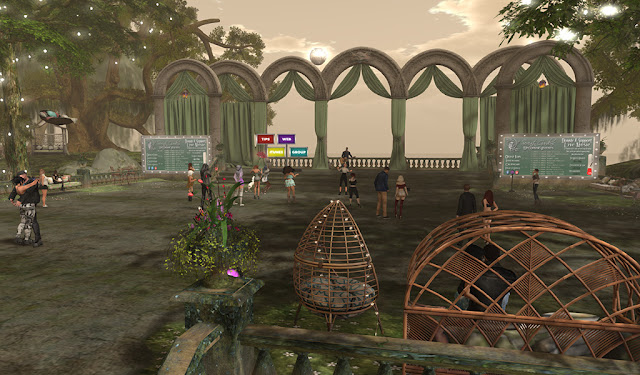 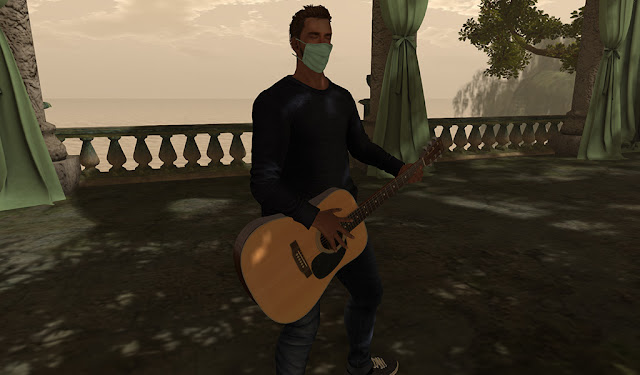