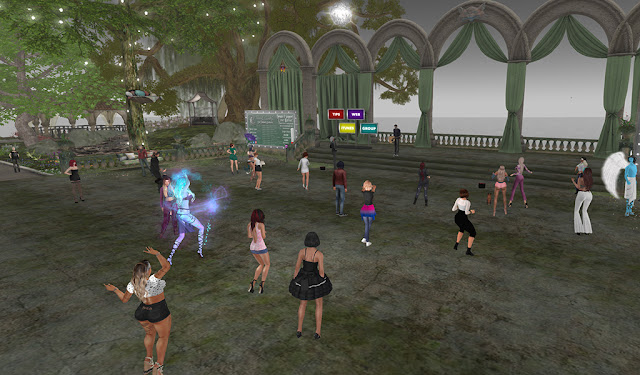 I can't recall a single bad show at Serenity Gardens (except that one time my audio gear failed and I sounded like a Zakbot). It's a great place to play or otherwise experience live music in Second Life. Photo by Kat.
I'm doing something later today that I wish wasn't necessary, and that probably isn't: I'm getting tested for COVID-19.
No, I don't think I have COVID-19. My only symptom is an annoying but rather minor sore throat that's been hanging out for about a week. I've had a couple of other things going on that loosely fit the coronavirus profile, like occasional bouts of random tiredness during the day. Frankly, I'm pretty sure I've felt that way for a lot longer than COVID-19 has been a thing.
But here where I live in Los Angeles County, testing is available and free, and it's convenient as well. Basically it's a drive-thru process. I've watched videos of my friends having it done. You schedule an appointment, and then pull up to a station where they check your ID, and then you are handed a little kit containing a swab, a small capsule, and a couple of plastic bags. From what I've seen, they want you to cough a few times, and then swab the inside of your mouth in various places. Then the now-contaminated swab goes in the capsule, which is placed inside both bags. It seems like the safety of the health care workers at these testing facilities is paramount, which is as it should be. You don't even open your car window other than the moments you get the test kit and when you drop it off, which seems to be done via an extendable rod to minimize the proximity of the workers and the people being tested.
Anyway, that's today. I should be clear that I'm doing this purely out of an abundance of caution for peace of mind, rather than any real suspicion that I have COVID-19. My sore throat is most likely a result of post-nasal drip (side note: I hate that term) via allergies that tend to affect me in the spring (and year-round due to these cats that live here). 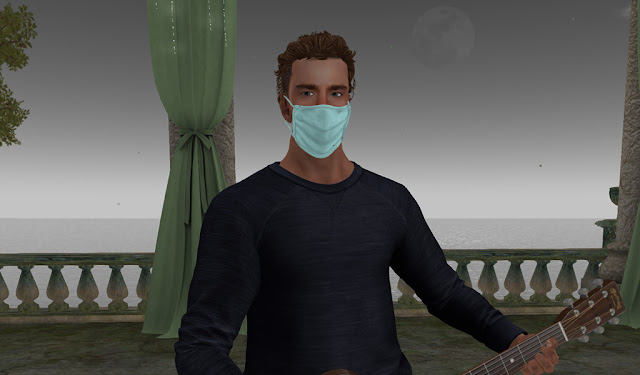 I continue to perform in SL while wearing a mask. Until I can comfortably be among people in real life unmasked, I stay that way in the virtual world as well. Photo by Kat.
Black Lives Matter... A Musical Tribute
Despite my throat being ouchy, I was very intent on going on with the show for my bi-weekly performance at Serenity Gardens in Second Life. I'd already confirmed with some rehearsing on Saturday that I was able to sing reasonably well, or at least well enough to do a decent SL show. The reason I wanted to be sure I could perform -- beyond the aspect that my shows are few and far between these days, and each one is important to me -- is that I'd planned on a rather special theme. 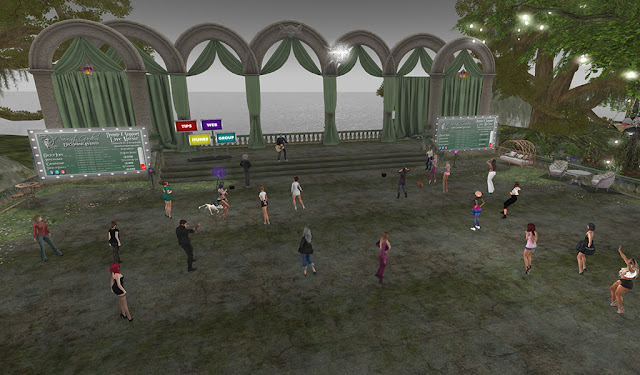 I always am grateful that audiences at Serenity Gardens are accepting of whatever it is I choose to play. Photo by Kat.
I think this is a well-known fact, but I'll say it anyway: nearly everything you hear in modern music for the past 50+ years has its roots in black songwriters and performers. And yes, I mean everything. You can trace a path from nearly any song you hear today in any genre to its black roots. Let's say you like a heavy metal band (and yes, I'm purposefully choosing an example from a genre that's predominantly white today) like Mastodon. They were influenced by other contemporary metal bands like High On Fire. They, in turn, were influenced by classic metal bands like Black Sabbath, who were influenced by heavy blues bands of the time like Cream, who were influenced by traditional blues artists like Robert Johnson, Muddy Waters, Son House, Elmore James, Leadbelly and many others who were uniformly African-American.
I can show you a similar path for nearly any style of music today, from EDM to trap to hip hop to country and beyond. The fact is that unless you are focused on baroque, classical, or romantic-era music, the songs you love have their origins with black artists.
The Show
With everything that's been happening throughout the world regarding civil unrest and protests in regard to the treatment of black people by various authorities, I knew it was an opportunity to highlight the contributions of black people to the music I love. What I didn't realize -- until I actually sat down to create a set list as such -- is that out of my 500+ songs that I do as a solo artist, only a tiny fraction of them are by black artists.
Why? I don't know. Anything I write to explain it will sound like some kind of excuse. I will say one thing that perhaps explains this disparity, and it's that I tend to only do songs that I feel I can perform genuinely. There are aspects about the experiences of being a black person that I could never, ever truly understand. No one looks at me and makes assumptions based purely on the color of my skin. To the best of my knowledge, no one has ever denied me opportunities, or treated me with less respect, based on what I look like or where my ancestors were from. I believe that's why, consciously or otherwise, my musical repertoire is by white artists on a more than 90% basis.
But the weird thing is that while I'm not always confident in performing music by black artists, the music I listen to is filled with tons of black writers and performers. I need to get over whatever lack of confidence I have to perform these songs to the best of my ability, and make sure they're included in more of my sets. 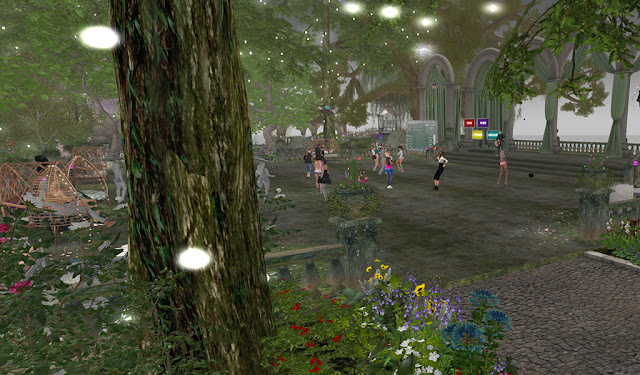 A lovely live music environment. Photo by Kat.
For last night's show at Serenity Gardens, I was able to pull out seven songs in my repertoire that I felt I could do reasonably well, and filled out the rest of my set with originals. We had a pretty good crowd there. Normally Grace McDunnough is doing the set before me there, but I found out afterwards that a lightning strike had taken out her mixer (yikes!), so Abby Jaidov was onstage when I arrived and I enjoyed listening to her as I got ready to do my show.
Serenity Gardens set list...
Blew the Dust Away (They Stole My Crayon)
Falling Down (Zak Claxton)
This Afternoon (Zak Claxton)
Pickles (Zak Claxton)
Always Tomorrow (Zak Claxton)
Off the Wall (Michael Jackson)
What’s Going on? (Marvin Gaye)
Hello (Lionel Richie)
Someday (Mariah Carey)
I Believe When I Fall In Love (Stevie Wonder)
Bold as Love (Jimi Hendrix)
Take Me With U (Prince)
Huge thanks to all who hung out for my show and who appreciated what I was doing in tribute to BLM, with special thanks to the following who helped support the show!
AaronCabottJones Resident, Tyche Szondi, Kat Claxton, Yummi Burrito, Alex Zelin, Trouble Streeter, Kat Chauveau, Diana Renoir, Abby Jaidov, SaritaTwisted Resident, my excellent manager Maali Beck, and the fabulous team at Serenity Gardens, Tilly Rose and Ilsa Wilde!
Posted by Zak Claxton at 6:20 PM