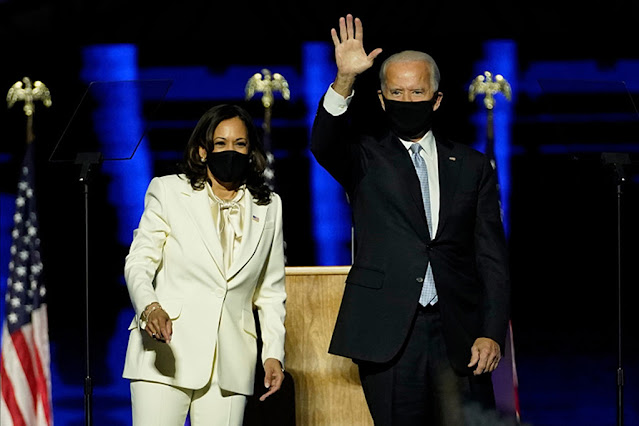 Four years ago, on November 9, 2016, I wrote a post congratulating Donald Trump on his victory in that year's election. Today, I do the same for Joe Biden and Kamala Harris.

I write today to extend my congratulations to both of you for having won the 2020 general election. I am happy to say that I supported your campaign and that your victory, which will likely end up as a large 306 to 232 win in the electoral college and a greater-than 5,000,000 vote advantage in the popular election, is indeed a mandate by the American people that change is desperately needed. In contrast to this moment in 2016, I am very optimistic about your presidency and the administration you will build.

My message to you today is very simple: you have an enormous task ahead of you. It may be a bigger challenge than any executive branch has faced since the Civil War and Reconstruction. On one side of you are the people who truly and fervently believed in your predecessor's message... one of an America that is strong and self-reliant at its best, and filled with bigotry and hatred in its worst aspects. On the other side of you are people who felt that you represent the status quo of center-based liberalism, and they distrust that you will take strong action that the left considered essential regarding climate change, wealth inequality, health care, and much more. And, hovering over it all, you have the immediate challenge of the COVID-19 pandemic that has continued almost unabated since its start.

At this very moment, you also have the unprecedented challenge of a former president who has not yet accepted his loss, and will likely be anything but gracious as he eventually leaves office (which he will). But his reticence to act in a way that respects the American democratic process will, at least temporarily, make it even more difficult for you to impart your message of bringing the country together.

It's an interesting analogy that, due to the factors above, you start your jobs with a much heavier burden than nearly any other administration in the history of our country. In a way, that's similar to a person in America who does not have the amount of privilege given to those in the majority of race, gender, and national origin. You will have a more difficult time even getting to what would be the starting line for most presidencies.

A personal side note: I didn't support either of you in the Democratic primaries, with my outlook leaning much more toward candidates like Elizabeth Warren and Bernie Sanders, whom I felt would take the more radical steps necessary to help our country get back on course. That being said, in retrospect, I am not at all sure that either of them would have been able to mount a successful campaign against the former president, nor would have had your respective abilities to help reunite the USA.

All that having been said, I am hopeful and optimistic about the results of your victory, short- and long-term. I am ready to help you achieve your stated goals. And I am truly excited about the possibilities that the next four years bring; it's a feeling far removed from how I felt at this time in 2016. I look forward to the next steps with the following caveat: I will not hesitate to keep pushing the progressive agenda and maintaining a critical eye on your actions. Unlike the last administration, I believe you would expect no less of me, and of all the citizens of the country, so that you can best represent what we want, and what we need.

Thanks, and good luck.