My darling Kat was driving along last Friday, listening to NPR, and suddenly she couldn't believe what she was hearing: a review of newly-available Neil Young Archives Vol. 1. She and I had both spent many years being aware of and awaiting the arrival of this box set of Neil Young's music that had achieved mythical status years before being released. Since it was my birthday the next day, she swooped into a store and got their one and only DVD version of the set, which is being offered in three different formats (more on that later).

For those of you who are blissfully unaware of the trials and tribulations that preceded the release of this package of Neil Young music, let's just cut to the chase and say that this little project of Neil's was started in the 1980s, was expected to be released in the mid-90s, and came out on June 2, 2009, some 13 years after the expected point of delivery. I'm not going to dwell on that here. In fact, there's so much to talk about in regard to the Archives, I'll go right ahead and tell you to go by Thrasher's Wheat or some other online resource dedicated to Shakey. I'm not going to waste too much time here with the background info; the point is, the Archives have indeed arrived.

For this initial part of the review, I'm not going to bother too much with the amazing content in the package. In fact, heh heh, I have time to maybe tell you most of the details of the package itself, for now.


Neil Young Archives Vol. 1 comes in a big shrinkwrapped box. You remove the wrap and you're left with... a big box. 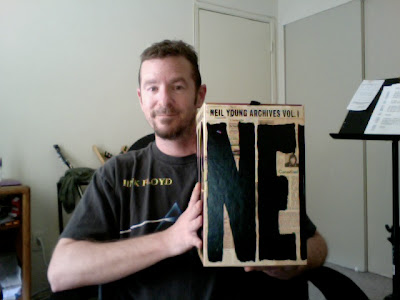 You open the lid of the box, and a cornucopia of stuff awaits you inside. 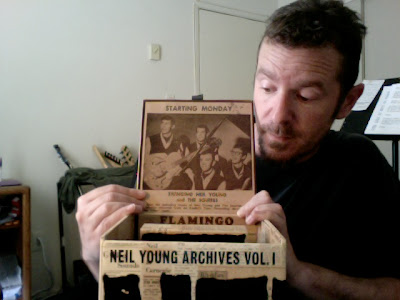 I started by pulling out a promising-looking block. At least it was the easiest thing to get out of the packaging, so perhaps that's why I went for it first. 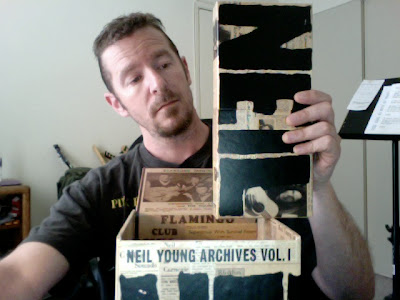 Then I found that this block folded into two. A quick side note: all of the parts of the package that have opening lids seem to have a small magnet that's integral to the box, so they all open and close with a reassuring click. 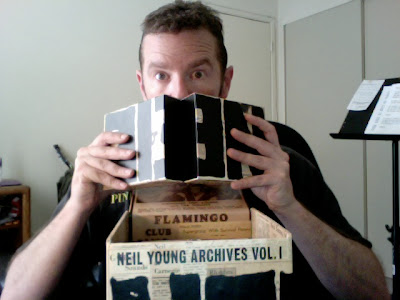 Inside the block, I found two small tabs that opened up to reveal 10, count them, ten DVD discs, each in individual cardboard sleeves with cool artwork. Resisting the urge to ignore everything else while devouring the content of these magic plastic discs, I pulled the rest of the stuff out of the box. 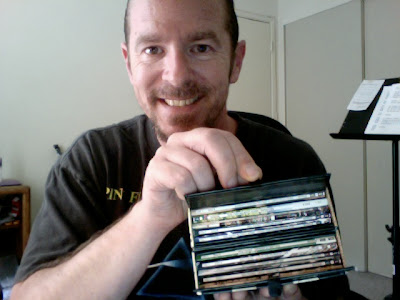 The next thing out was some kind of poster. I unfolded it to see that it resembled the world's deepest filing cabinet. Each file in the cabinet listed a song, and there were a lot of them. Wow. This is going to be even more intense than I thought. 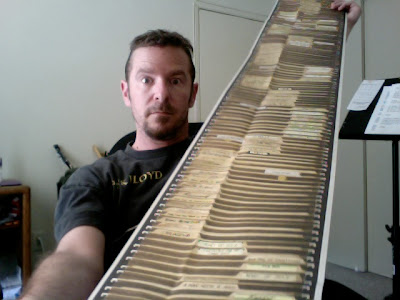 Moving along in order of "ease of getting out of the big box", I pulled out something that reminded me of a stash box, if I happened to know about such illicit things. The first thing I saw in the box was a copy of Neil's recent release Sugar Mountain, Live at Canterbury House 1968. While I'd purchased this already on iTunes, I was quite happy to get it in CD and DVD media for the much higher audio quality. 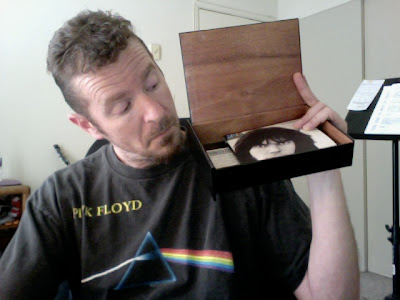 Also inside the stash box, I found a credit card with a code number on the back. Conveniently, buyers of the DVD and Blu-Ray versions of the Archives can go online and get the MP3 files (encoded at a respectable 256kbps) of the entire set! Very nice for the quick load to the iPod or similar devices.

Next to the card was a notepad with an old design from the Whiskey A Go Go here in Los Angeles. The top note reads, in Neil's handwriting, "If you are a speaking pad - why don't you say something?!?!?!?", and beneath that it says, "Uhh?"). Too cute. I don't think I'll ever bring myself around to using one of the notes in the pad unless it's a really special occasion. 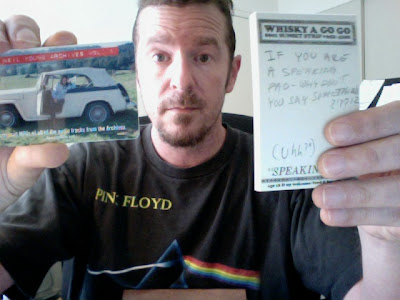 Apparently I'm not the only one who felt this container had the "stash box" vibe. Look closely in the lower corners and note the seeds. They're part of the graphics. Love it. 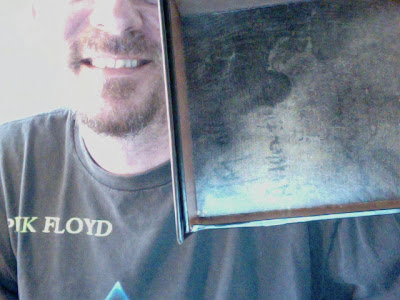 Next, I pulled out this impressive "leather" bound book. The cover is actually really cool and is engraved with what I think might be a tree on Neil's ranch. It's 236 pages, and is full of... wow, man. Stuff. Lots of cool stuff. 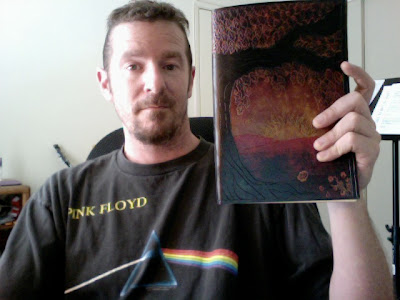 What kind of stuff? Photos, handwritten lyric sheets, letters, news clippings, and more, in addition to information on the content of the DVDs. It's just fucking spectacular. 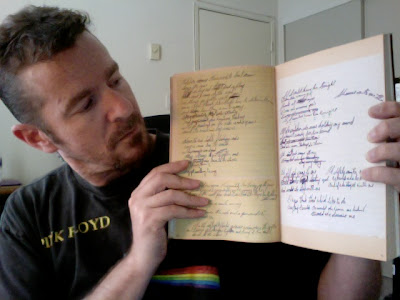 As I said above, we'll do another post with more information of the contents of the DVDs (or Blu-Ray, if you're a lucky bastard who has that set). For now, let's wrap up Part 1 with a basic list of the 10 discs inside. 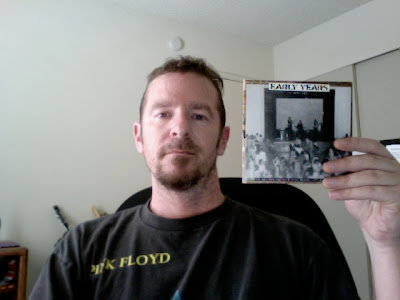 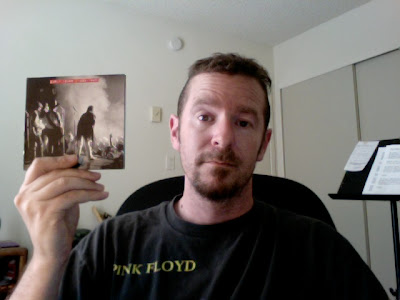 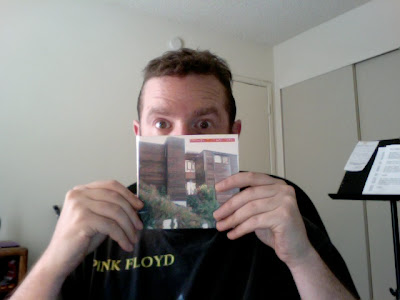 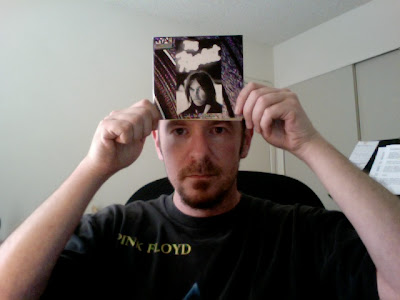 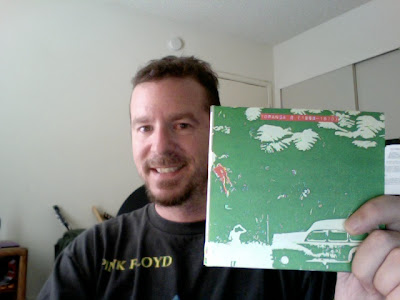 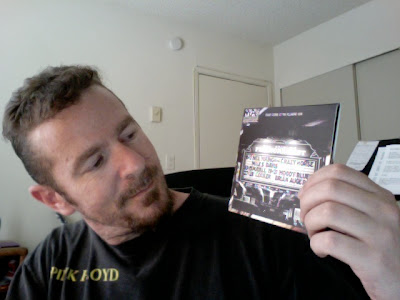 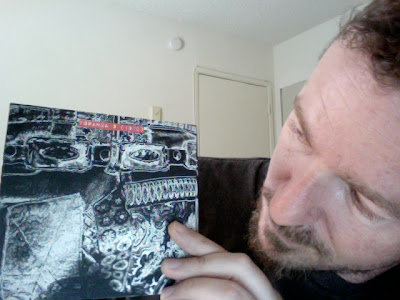 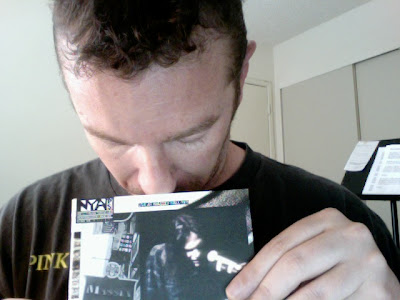 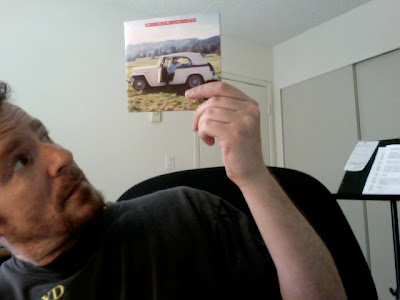 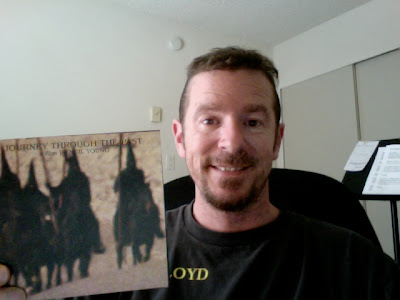 As I said, it's pretty deep. Stay tuned for Part 2, where we look and listen to what this Archives has to offer.
Posted by Zak Claxton at 3:25 PM

Great review. I just picked up my box set tonight and my heart is still pounding as I go through the box. (Yea, a NY nerd for sure) I got the Bleu Ray version and will wait until everyone goes to bed before I start checking it out. I'll probably download the mp3s 2nite. Can't wait to enjoy this set. Hope your journey "through the past" is going well.

It's been a blast. I keep the Archives sitting here next to my desk, and just about any moment I have to focus on the music (this isn't the type of stuff you want running in the background -- it merits your attention), I put on another DVD and just let the tunes wash over me. It's terrific.