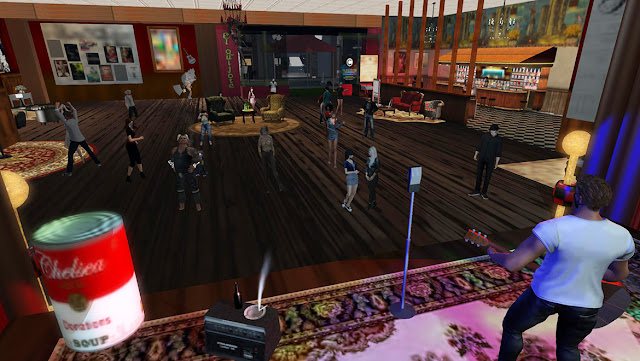 Enjoying a night of fine-ass rock and roll at Hotel Chelsea. Photo by Kat.

This blog -- the very existence of it -- is perplexing to some people. Trust me, I've heard about it... usually sideways from people who talk shit behind other people's backs who are, themselves, talking shit about me. "Why would he blog about every live music show?" they ask, giggling as if this was the most ridiculous activity imaginable.

Well lemme tell ya: there are reasons, and they're pretty good ones.

Memories
I'm not a big nostalgia guy. In fact, nothing makes me more filled with disdain than when, say, you're scrolling down the comments section of a YouTube video for some song or TV show from long ago, and you run into the invariable statement of, "Music was so much better in the '80s," or, "I wish I could go back to the '90s when everything was great." What a bunch of fucking pathetic shit.

That being said, much like any diary, this blog has been tremendously useful for me when I want to look back on various things. Sometimes it's in regard to my shows... I document each set list, and have records of each venue I play in Second Life (many of which no longer exist in any form except for my recollections and photos here). More often, it's about things happening in the world, both personal and global. Want to know when I last had pneumonia? It was March 2012 (and it was awful). How about the first time that all three members of They Stole My Crayon went to Joshua Tree together? That would be three months later in June 2012 (and it was great). My first big protest march of the Trump era? March 2018. You get the idea.

Are these things super important? Not all the time, no. But documenting my experiences, thoughts, and feelings has come in handy on many times for many reasons. 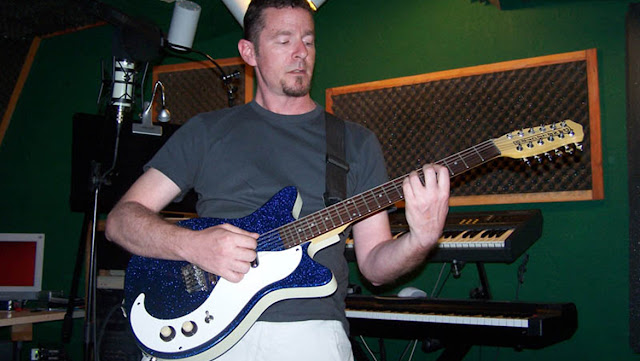 I think this is the first photo of myself in real life on this blog. It was from June 2008, and I was in the studio working on the Zak Claxton solo album that came out the following year. Side note: I've been doing this blog for so long that the first bunch of posts weren't here on Blogger; they were on MySpace. Seriously.

It's Not About the Shows
Probably 80% to 90% of these blog posts are titled with a focus on a live music show I've recently done, but if you look at the content of the post, while the show is covered appropriately, it's rarely the actual topic of the post. This blog documents personal triumphs and tragedies; political activism and big life events; and random mundane and/or weird shit that I might find amusing years from now.

There's no way I'd bother doing this blog if it was only about my Second Life shows... no offense to anyone who attaches a lot of importance to a guy made of pixels strumming a cartoon guitar on a computer screen. Rather, the shows give me a valid reason to consistently update this running track record of life as I see it. 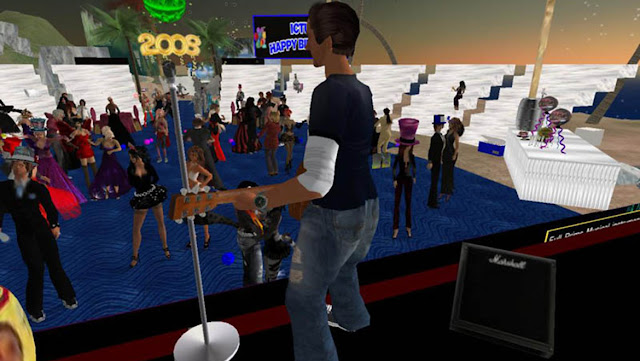 What were you doing on New Year's Eve 2007? I was playing a well-attended event in Second Life, apparently. While this blog is certainly not all about the hundreds and hundreds of live music shows I've performed over the course of my life, it's pretty cool having this track record of them.

People Actually Look at This Thing
The other part of doing a blog -- a public diary, if you want to consider it that way -- is the question of whether or not it matters that people actually look at it. Otherwise, if it were only for the purposes of my personal memories, I could keep this completely locked down and private. But people do look at it. Quite a lot of people.

That's a lot of views for a random non-famous musician's silly little blog.

There have been over a quarter-million views of the stuff I write here (my own views are not counted in that total) since I started this blog. It averages over a thousand views each month. And sure, some of those are bots and other entities that don't serve any purpose... but certainly not all of them, or even a small portion.

My job in real life is in marketing communications, aka advertising and PR. I know that each "marketing touch" counts, and I know for a fact that people have discovered my music via this blog, and people write to me to talk about things they've read here. It actually matters to some people... way more than you'd assume.

Anyway, you get the idea. I write this blog because I enjoy doing it, because it's a valuable repository for my own life experiences, and because people read it and enjoy it. Those are good reasons, and anyone who has a problem with that is showing that they don't have a fucking clue about the big picture. They can -- and should -- suck my dick.

How About That Show?
Oh yeah. So, I perform at 5PM on the first Tuesday evening of each month at Hotel Chelsea in Second Life. I have the benefit of having a slot directly after Max Kleene, and truthfully, one of the main reasons I agreed to play there in that regular slot was specifically because Max was there before me. It's not a matter of having a big crowd when I start my gig. What it is, is that I feel my music goes well with his, even though we're somewhat stylistically unique from each other. But my shows are the kinds of things that his crowd could enjoy, and vice-versa. I knew it would work, and it has continued to do so. 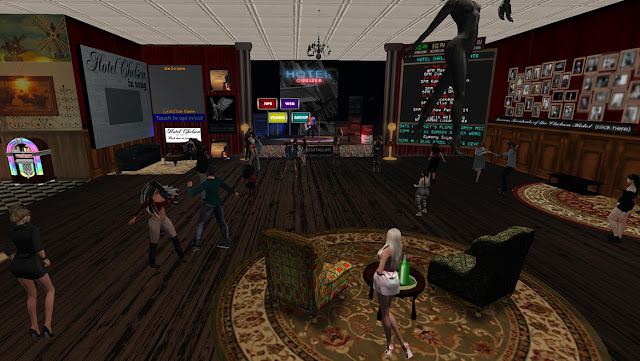 A nice crowd of pretty SL avatars. Photo by Kat.

This show went really well. My only self-criticism is that due to the demands of real life, I haven't been playing guitar or singing in recent weeks as much as I usually do, and I should have taken more time to properly warm up before doing this event for maximum good results. That being said, I'm my own harshest critic, and most people probably felt everything was as good as it always is... which, truthfully, it probably was. I'm just a bit of a perfectionist in regard to my own abilities. 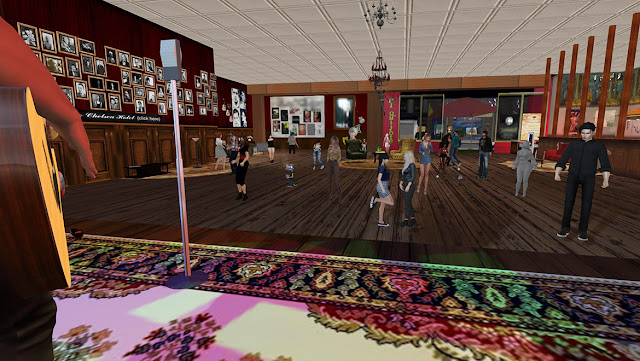 My view from the stage at Hotel Chelsea. Photo by Kat.

One song of note: I debuted "El Invento", the new tune from Swedish singer-songwriter José González. I am a huge fan of this man's work, both solo and in Junip, and I am totally looking forward to his upcoming album which will be released in September. The challenge for covering "El Invento" is that it's sung in Spanish, a language that I do not speak and only know marginally by having grown up in Southern California. Singing a song in your native language is hard enough, getting all the pitches and phrasing correct. Singing one where you don't truly know the meaning of each word nor the proper pronunciation is really, really hard, but I love the song and will likely work on it some more to the point where I'm comfortable playing it without feeling like I'm faking my way through it. 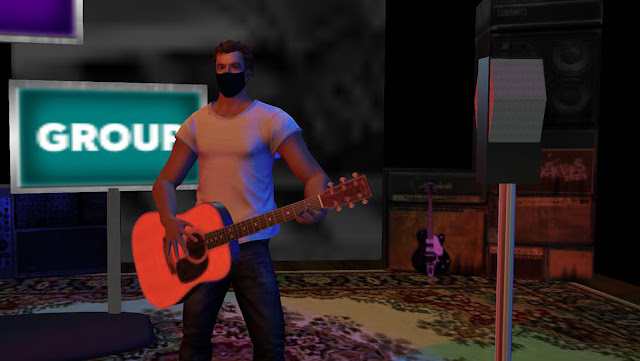 Why am I still wearing the mask? Funny you should ask; I nearly took it off before doing this show. And then I started thinking. I have visitors to my shows from all over the world... across the US and Canada, throughout Europe, Australia and more. Many of those places are very much still in the midst of the COVID-19 battle, and even here, we're still dealing with the Delta variant and people's reluctance to be vaccinated or to continue wearing masks. I'm leaving it on until the world has truly gotten to a point where COVID-19 is conquered for all intents and purposes. Photo by Kat.