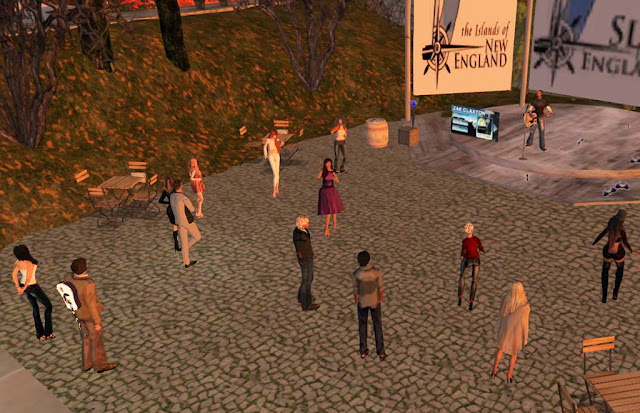 Rocking and laughing is a great way to spend a Wednesday evening. Trust me, it's true. Photo by Triana Caldera.

Some musicians describe performing live music like a drug, and they might not be far from the literal truth. Think about it this way: you get an adrenaline rush from singing and/or playing your instrument in front of a crowd. Playing music is a physical activity, so you get a similar endorphin rush as a distance runner. And finally, I'm pretty sure your brain starts pumping out neurotransmitters like serotonin, creating those lovely sensations of well-being while you play.

So, even for we musicians who don't turn to external drugs while we play live, our bodies are creating their own euphoric experience. And, like pretty much any drug experience, it's quite easy to get addicted to playing live. I should know; I started when I was in middle school and have kept doing it in many forms for the past 35 years or so. I was hooked after my first taste of applause.

My performances in Second Life, especially at places like The Islands of New England, invoke the same sensations that I've had many times playing in the flesh in front of a live audience in clubs, theaters, parties, festivals, and more. While an SL show has a different dynamic than a real-life gig, the artist is still there, combining his or her talent and ability to connect with an audience, regardless of the fact that the crowd members are often thousands of physical miles away. This is especially true at a venue like TIONE, where people seem to really have an appreciation for well-performed tunes. Last night's show there was, as always, a blast both for me and the people who listen to my insanity and who apparently enjoy my music. I have never once had a bad show there, and I probably never will. I'd also like to add that my great friend Lyndon Heart had the slot directly after mine, and it's always a terrific pleasure to hear him masterfully do his stuff. 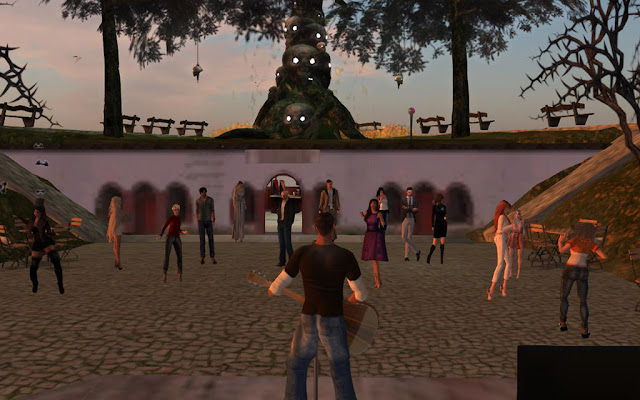 The Islands of New England has been where some of my best shows in any world have happened. Photo by Triana. 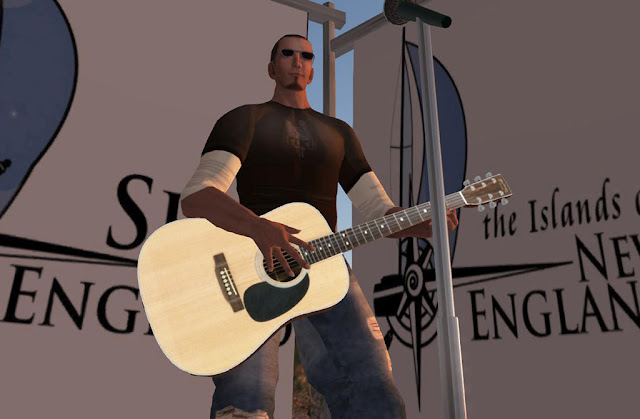 Here's me, doing what I do. Photo by Triana.
My Set List Secret
Here's another thing I want to share about my shows. In one hour, I can almost always count on being able to fit in either 12 or 13 songs. previous to my show, when I'm putting together a set list, I never pull out exactly that amount. Instead, I usually grab 16-17 songs, and then adjust my set as the gig goes on based on a couple of factors: a) how I'm feeling at that moment and b) what I think particular members of the audience might like to hear. One of the greatest aspects of SL music is the ability to get to know your audience members way better than the random folks who might happen to be at a bar one night that you're performing there.

In addition to the original songs that I do (and those of my band They Stole My Crayon), I always make sure to pull out songs that span a few areas: emotional vibe, year of release, genre, and so on. That way, as the show goes on and my mood changes (usually for the better, per above), I have tunes available that will fit my state of mind, and also be able to whip out certain songs based on who I see in the crowd. Especially because I do not take requests, it's a nice way to try and thank the people for their presence. If I see a person who I know likes a particular artist, I'll proactively perform that song for that person. Of course, doing it this way, I get to the end of the show and have songs left over. I just save those for top choices at the next gig. It all works pretty well. 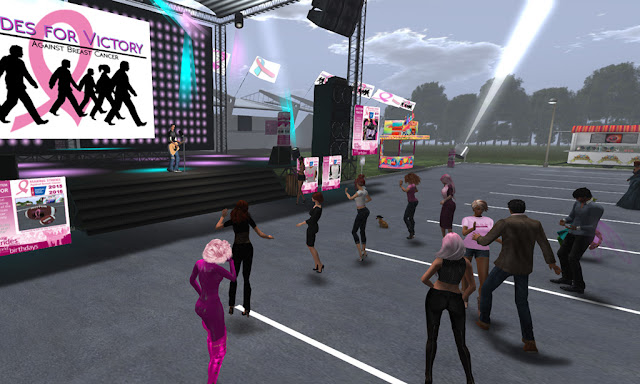 But I can't tell you what the name of the place was. Oh, I can give you a link that will take you there, but I don't know what "there" is. Is it a regular venue for live music in SL? Was it built just for the purpose of this event? I have no answers. So, I'll just tell you what I do know, which was that it was a really good show, and it seemed to be successful in its goal of raising money for an important cause.

Let's talk about that cause for a moment. "Making Strides" is another fundraising branch of the American Cancer Society, the same folks who organize the "Relay for Life" events, but the difference is that "Making Strides" is specifically dedicated to breast cancer. You probably already know this, but I'll mention it anyway: the chance of a woman having invasive breast cancer some time during her life is about 1 in 8. The chance of dying from breast cancer is about 1 in 37. Those may seem like decent odds, but they're not: breast cancer affects more women than any other kind of cancer apart from skin cancer. That's the bad news. The good news is that due to years of ongoing awareness campaigns and medical research over the past 30+ years, more women are finding their cancer earlier, when it is more treatable and their chances of survival are greatly increased.

Why would I spend an hour on a Sunday helping to raise funds for this cause? Well, I hope the answer is obvious. No, it's pretty unlikely that I'll personally get breast cancer (although, just to be fair, it does affect a small percentage of men as well). But I already have had an uncomfortably large number of women who are close to me be diagnosed with the disease. Almost all of them, fortunately, are survivors so far. But they had to go through hell and back with radiation and chemotherapy, and deal with the awful side effects of that process. It's my genuine hope, as I mentioned during my show, that before the end of my own life, we're able to talk about cancer in the same past-tense tone we use for supposedly incurable things like polio and smallpox (or with the triviality we currently attach to something like a cold virus). With the right support, that just might happen.

Anyway, beyond all that, the show itself went really well. You all know that I'm performing more rarely these days, and that makes each show a little more special. Upon arrival, I was a little trepidatious about the fact that there was a DJ spinning tunes before my show; as I've said previously, not all audiences are into both DJs and live performers, and there's always a risk that a mass exodus will happen from a venue once they hear the strum of a live guitar rather than familiar recordings. But DJ Titan was doing his job well, and the transition was smooth. It seemed that we retained a large percentage of the crowd, and brought in a bunch more. 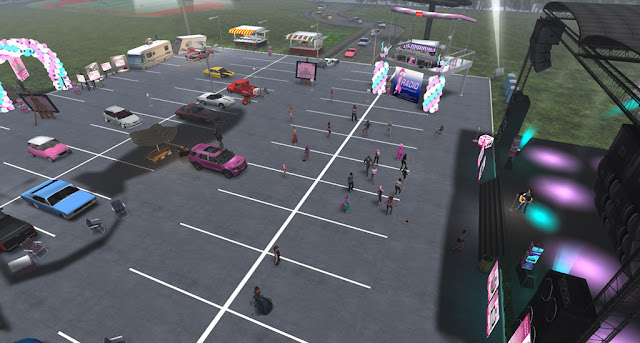 What a cool idea for a build. Each time I think I've seen everything in SL, I'm proven wrong again. Photo by Kat. 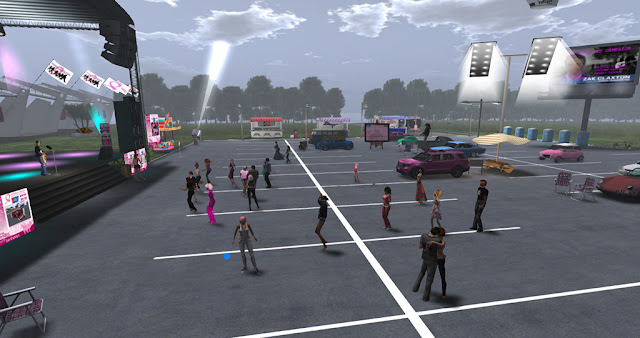 People seem to be enjoying themselves while I do live tunes in support of a great cause. Photo by Kat. 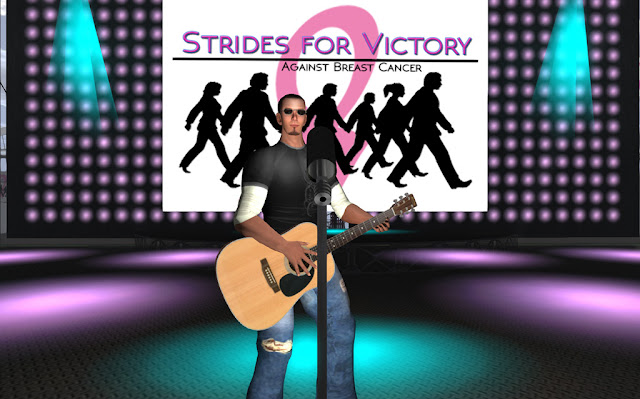 Me, doing my thing. Photo by Kat. 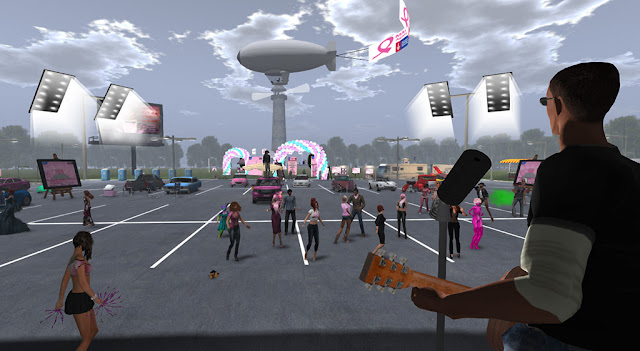 A tailgating party in a parking lot, a circling blimp, a fight against breast cancer, and me playing live music to people around the world. Life is weird, you know? Photo by Kat.
One final weird note: I announced yesterday that one of the songs I performed, "Black Hole Sun" by Soundgarden, was a debut for me. As in, it was the first time I had ever performed that song in SL. I actually was under the impression that I'd never done that song anywhere, ever, and announced it as such to the crowd. So imagine my confusion when I happen to see that I really had played it once before, in June of 2013. I have no memory of this. None. Even more strangely, I can't find "Black Hole Sun" in my collection of lyrics, which would be a sure-fire way of knowing I'd done it previously. So... I don't know what to tell you, other than perhaps I'm living in some parallel universe and finally found proof of this.

Many thanks to everyone who came out to the show and helped support an unquestionably great cause! May your generosity bring you great Karmic rewards!
Posted by Zak Claxton at 10:17 AM 0 comments