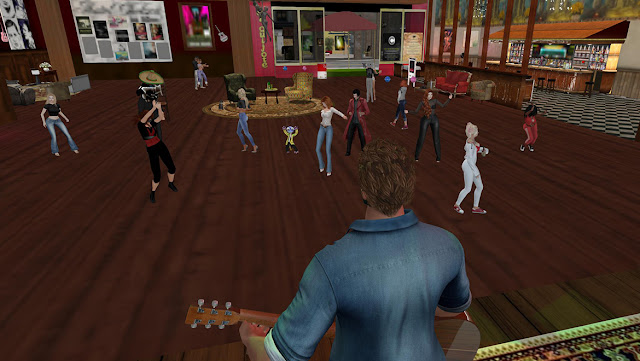 Doing my May 4 show at Hotel Chelsea in Second Life. Photo by Kat.

I want to talk about my show at Hotel Chelsea, which was really good, but let me first relate a couple of recent random things. I'll start by telling you about how I'm an idiot (or at least one of many examples of this fact).

Pointless Vaccine Freakout
As I noted last week, I had my second Moderna vaccination on Thursday. After the many stories of intense side effects from the second jab, I was fully prepared to spend Friday and perhaps a portion of the weekend feeling like shit. But that never happened. I was perfectly fine, and I remain so. My worst side effect symptom was some barely discernible joint pain that was so minor, I had trouble distinguishing it from typical everyday pains that people my age tend to experience.

I'd spent some time over the weekend working on some song ideas, and being the lazy bastard that I am, I was playing guitar in my bathrobe on Saturday morning hours before finally showering and getting dressed like a human. When I finally got off my ass and went to get in the shower, I looked in the mirror and noticed that in places on my chest and my thigh, the skin looked red and rash-like. Uh oh. I immediately assumed that this was some kind of bad reaction to the Moderna vaccination and that I was about to die until I showed Christina, who pointed out that the affected areas were exactly where I'd been holding the large dreadnought acoustic guitar that I'd been playing intensely. Sure enough, the red splotchy skin faded into normal hues within minutes. Crisis averted. Silly me. 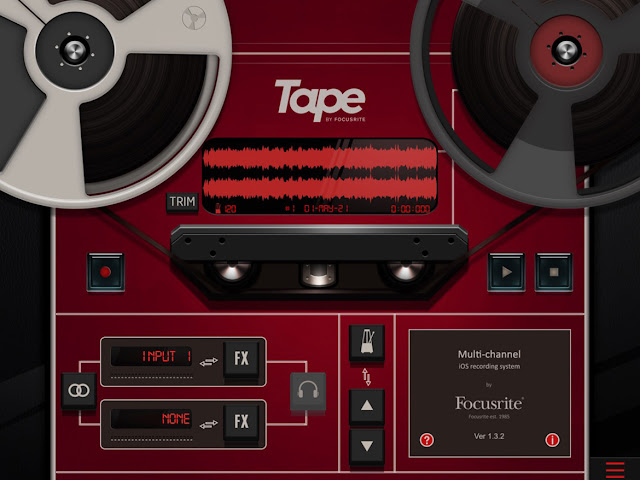 Music tip: sometimes just the act of getting ready to record "for real" -- launching your DAW software, setting up mics, whatever -- can take just enough time and be just distracting enough to allow you to lose your inspiration or forget whatever musical idea you've stumbled upon. I've had this Focusrite Tape app on my iPad forever; I'm not even sure they still offer it. But there are plenty like it for your phone or tablet. When I have an idea, or even a partial idea like a riff or progression, I will often just flip open the iPad, start up that app, record my thing through the built-in mic, and then have that recording to refer to later if and when I want to flesh out the new song.

Saturday Afternoon Rock with Maneka
I'd set a reminder on Saturday for myself to check out the Zoom-based livestream show by a New York band called Maneka. I came to learn about Maneka in a weird way, but it's not atypical in the world of indie music. About five years ago, I stumbled over a song that I liked by a band called Jackal Onasis. I was impressed by the drummer/singer, a woman named Jordyn Blakely, and ended up following her on Twitter. I was happy to note that she also seemed like a cool person who I related to regarding non-musical things like political/social outlook and so on. It's never a guarantee that someone whose music you enjoy is also a human you'd like personally as well, so it's nice when that happens. Jordyn had shared earlier last week that she'd be doing a Zoom show with Maneka (the band fronted by guitarist/vocalist Devin McKnight, of whom I was aware from his time in Speedy Ortiz). He's a really innovative guitarist and interesting songwriter, so my curiosity was piqued enough to check them out. 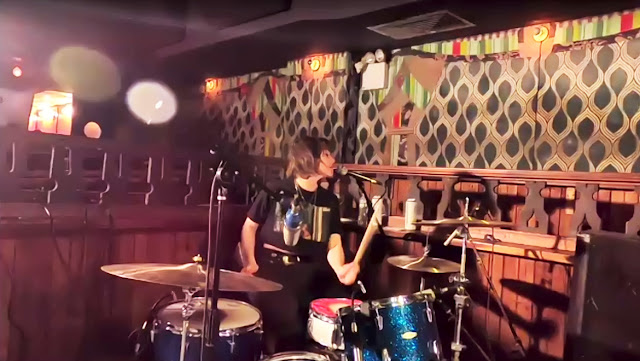 There's Jordyn doing her drum thing at the Maneka show on Saturday May 1. I think the technical terminology to describe her as a drummer is "fucking great", or perhaps "total badass".
I don't know what I was expecting from the show beyond having something fun to do on a Saturday afternoon, but I was really impressed by the band, which also featured bass player Nicola Leel (formerly from a UK-based band called Doe), and multi-instrumentalist Elise Okusami (who releases music as Oceanator) on guitar and keys. The songs they did at the Maneka gig were vibey and cool and dissonant, which is right in my area of enjoyability, and all four musicians were outstanding. The band was seemingly well rehearsed and tight. I was hoping to like the show a lot, and I ended up enjoying it even more than I was expecting. 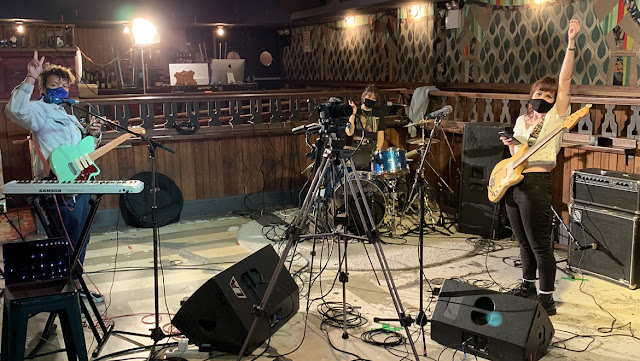 Left to right: Elise Okusami, Jordyn Blakely, Nicola Leel of Maneka. Ironically I don't have a pic of Maneka frontman Devin McKnight at this gig; he took this pic of the band and posted it, so he's not in it.
Here's a live performance video from last year if you want to check out Maneka for yourself.

Back to the Show
Starting in November of last year, I've been doing shows on the first Tuesday of the month at a Second Life venue called Hotel Chelsea. Coincidentally, my very first show there was on November 3, 2020... the day of the general election here in the USA when Joe Biden (eventually) defeated Donald Trump. Perhaps my show there was a good luck charm, if you believe in such things.

It's not a super visually impressive place as far as Second Life venues go, but it's definitely a venue that's focused on the music itself, and I have to say, the management there is incredibly nice, and the crowd I get there seems very appreciative of real live music. I've never had a bad show there; even the ones that didn't get great attendance went well and left me happy afterwards. 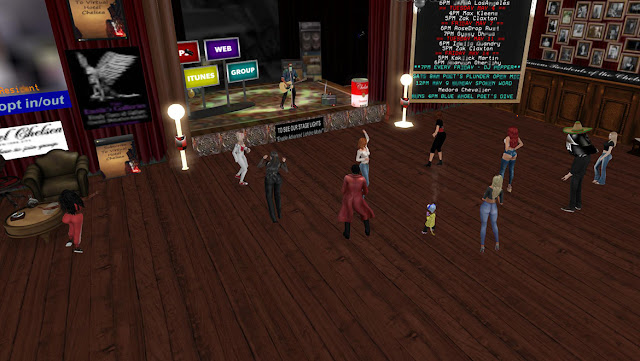 Good times at Hotel Chelsea in SL. Photo by Kat.
As I mentioned, it was May 4, known informally as Star Wars Day (as in, "May the Fourth be with you," which I find to be like a terrible dad joke, but whatever). My shows each month there follow Max Kleene, one of SL's most popular performers and a super nice guy whom I've now known for going on 15 years. Max was wearing a giant Darth Vader helmet while playing, and covered Weird Al's spoof on "American Pie" with Star Wars-themed lyrics. He also did two Billy Joel songs. I'm not sure why; like many performers in SL who aren't me, Max allows his audience to request songs, so there may have been a Billy Joel fan in his crowd. But the oddly coincidental thing is that well in advance of the show, I'd already pulled out my own set list, which also included a Billy Joel song that I perform rarely. I opened with it after Max ended his set with a BJ song, keeping the vibe consistent in a way that I think was pleasing to the crowd. 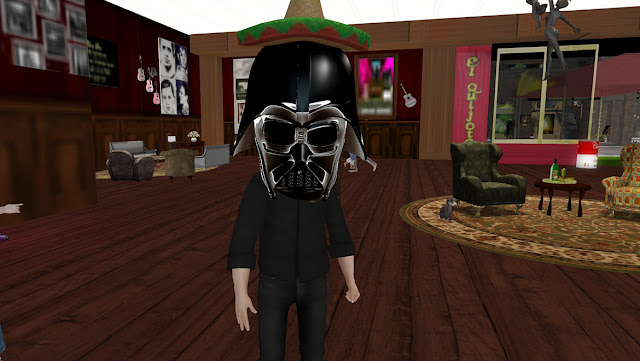 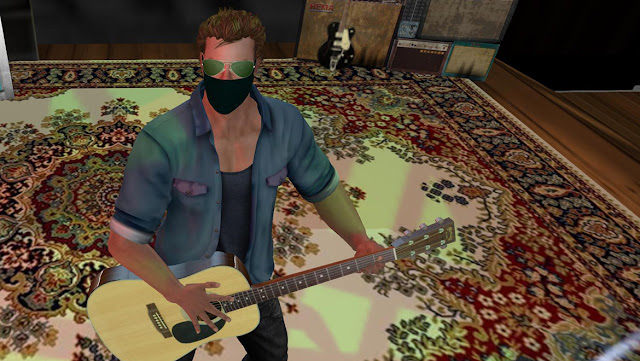 Why am I still wearing a mask in SL when I've been vaccinated in real life? For the same reasons I still wear one in real life. Especially during this time period where some people are vaccinated and others aren't, we still need to do our part to prevent the spread of the virus. Also, with the high likelihood of continued variants of COVID-19 popping up, it's just a good idea. How hard is it to just wear a fucking mask? I promise to remove my mask in SL as soon as I can be comfortable around large crowds of people with no mask in reality, whenever that may be. Photo by Kat. 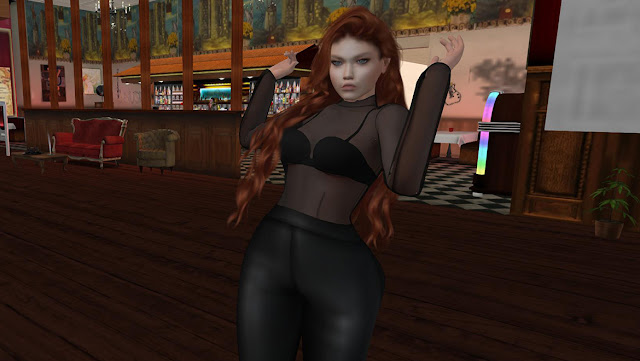 My wonderful friend and longtime music supporter Diana Renoir. I don't often play many of my own originals at live shows and it had been about three years since I last did "Thanks Anyway", but when I did, I dedicated it to Diana, who was supportive of me throughout the recording of my solo album back in 2008/2009. Photo by Kat.

While many folks associate May 4 with the fun Star Wars film franchise, the date also has a bit of a darker association. That's the date that in 1970, the Ohio National Guard killed four protesting students and injured nine others. As stories about the right to protest have once again been at the top of the news for the past several years and will remain so perhaps indefinitely, I wanted to use the occasion to voice my support for this First Amendment right, and did so by performing the Neil Young-penned song "Ohio" that was inspired by this tragic event.