When is the Notes Shack not fun? Never! It's never not fun, at least when we're having a Zak Claxton show there.

Seriously, we always have a good time at the Notes Shack. It's such a laid-back Second Life venue, the pressure to perform well is gone, and ironically, I always seem to perform well there as a result. Kind of one of those reverse-psychology venues. Anyway, I tend to do a show there every other month or so, and we always manage to get a good, enthusiastic crowd there. It's all fun for everyone. 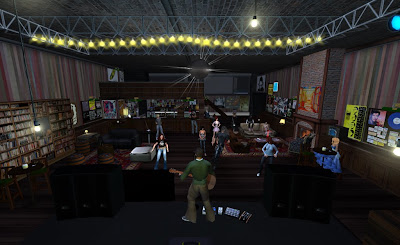 The Notes Shack is like a place you'd find me hanging out in real life. Photo by Kat. 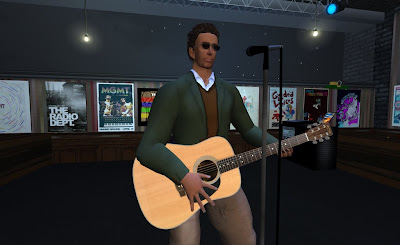 Kat calls this my Mr. Rogers wardrobe. Photo by Kat. 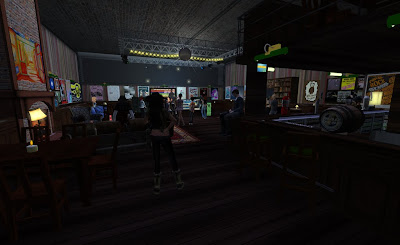 View from the back of the bar. Photo by Kat.

For today's show, I had Kat go through my big list of songs and pull out enough for a full set. It worked out very well; she grabbed some tunes I never would have though to do otherwise, and some worked out very nicely.

Pardon me for my absence from this blog for the past few weeks. I have a good excuse; in real life, I have a job, and sometimes that job forces me to choose doing things to make more money than I can strumming a guitar. So, having been out of town on business and such, I didn't have much time to rock the Interwebs.

Fortunately, I had scheduled my show on Facebook via StreamJam previous to my trip, and I was very glad to get back to playing in front of my silly and fun fans. It was a good show, and I think everyone had fun. 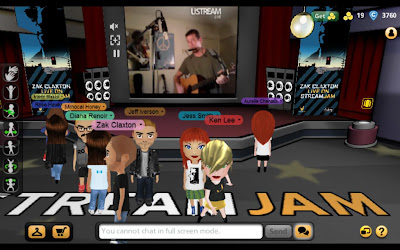 Thanks to all who came and supported the show! You all rock!
Posted by Zak Claxton at 4:34 PM 0 comments

Does the start of the video above seem a little abrupt? Well, that's because I forgot to hit the "record" button until about halfway through my show, heh heh. Since I'm a "glass in half full" kinda guy, I'll just say I'm happy that I remembered to record at all.

Anyway, for my first StreamJam show of 2011, we had a very fun time. I really didn't make a bunch of hoopla about the show; it's my busiest time of year at work right now, and I wasn't inclined to hype the hell out of a show that I wasn't sure would be very great. It's tough to perform your best stuff when your attention is spread out in fifty directions. However, it did turn out to be a good time for me and my little crowd of friends and fans. 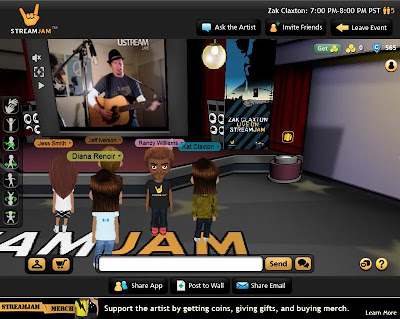 As usual for my StreamJam shows, I only did songs that I am licensed to do... namely, my own originals, and a traditional gospel blues. I realized that in the case of several songs, I'd actually put them aside for long enough that I enjoyed playing them again, which is a good feeling.

One special surprise, for me, at this StreamJam show was the unexpected presence of my best childhood friend, Randy Williams. As you can see on the video, I was ecstatic when he popped in, and I regaled the crowd with stories of our first band together, circa 1982-1984. Having old friends get involved in stuff you're doing nearly 30 years later... priceless. 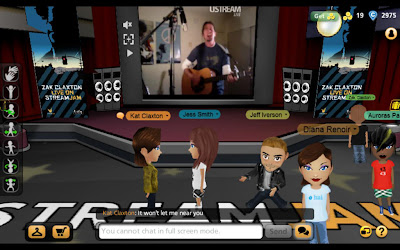 I don't know what I'd do every few Wednesday nights if not for StreamJam. Photo courtesy of Triana.

Huge thanks to everyone who came out to the show!
Posted by Zak Claxton at 7:53 AM 0 comments 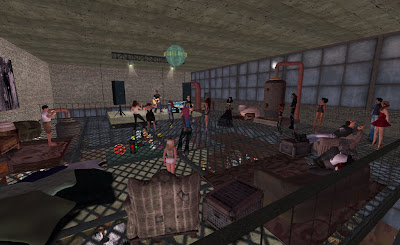 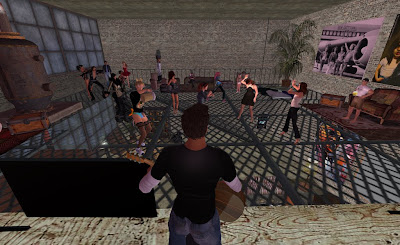 Happy New Year! As has been my tradition for the past four years, I kicked off 2011 by doing a show in Second Life. No, not on New year's eve; we musicians rarely get to enjoy ringing in the new year with our friends and loved ones since we're often busy on a stage somewhere. I made a conscious decision early on to not seek out any New Years shows this year, preferring to spend the time with Kat and some local pals from our little neighborhood. However, when our good friend Triana asked if I wanted to do a show at her Triana's Music Trivia event on Sunday January 2, I was happy to agree.

Why? Because we love Triana, and her trivia game is one of the most fun things we do in SL. As I've written before, we started going to TMT in 2006 and have only rarely missed a week since. The people are great, the game is fun, and it's a fantastic way to wrap up a weekend before starting the grind of a new week.

So, at the first TMT of 2011, I decided the theme for my show would be "new". Therefore, every single song I performed were those I'd never played in SL before... and with most of them, I'd never played them at all in public, in any setting! That made for a very fun show, not only for me but for my group of Zaksters who have seen me play dozens of times and probably welcomed the change. In a not-so-rare moment of insanity, I made the decision to perform Steely Dan's "Deacon Blues" in the voice of Elmer Fudd. Don't ask me why; I don't understand myself any better than anyone else. In any case, you need to hear me "wearn to wowk da saxophone"; it's here if you want it.

Obviously, apart from my very first show in SL, this was the first time where every single song was a debut, and I think it turned out terrific. I can't guarantee that I'll be continuing to do all of these songs on a regular basis (particularly Elmer Fudd's "Deacon Bwues", which is probably a one-time-only event), but some of them were very good, and I'll be glad to have another batch of tunes to pull out when the mood strikes me.