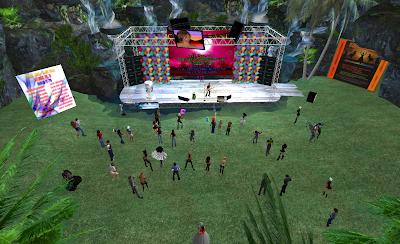 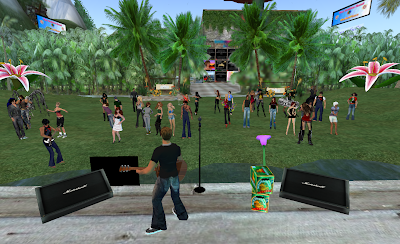 It was definitely a sad day for the whole SL music community as Crystal Sands was closing its doors. But like I announced during the show... better to go out with a bang than a whimper, and in true Crystal Sands fashion, they held an all-day rock show that was superb. I was glad to be able to participate.

For those of you who know a little of my background (Zakground?), I have a history with this live music venue. When I was first starting out playing live in SL, I'd get gigs here and there every so often. But I didn't really consider myself too committed to doing music in SL until I met Sandi Benelli in 2007. They had just opened Crystal Sands at the time, and came and saw me play a show at another venue on the recommendation of Grateful Stryker. I was doing more Neil Young covers than anything at that point; fortunately, Sandi was a Neil fanatic, so that went over fine.

Anyway, the result was that I ended up playing at Crystal Sands every Monday night at 5:00PM for more than a year. In late 2008, Sandi was forced to close down on Mondays due to her diminishing budget, and I hadn't played at Crystal Sands since then. When I heard a couple of weeks ago that Crystal Sands was having to close up entirely, I let Sandi know that I'd be honored to be included in the going away party. So, I did a half hour set today to say goodbye to Crystal Sands and to thank Sandi for all she's done. It turned out to be a great show, with a really packed audience and a good vibe despite the nature of the occasion.

Thanks to everyone who's supported Crystal Sands over the years, and here's to those who supported my show today!
Cellandra Zon, Kat Claxton, Diana Renoir, Janell Bolissima, Triana Caldera, Ritter Magic, Kia Bomse, Fyrm Fouroux, Shannyn Fall, Leyah Renegade, TenneseeJed Freiman, and most of all Sandi Benelli and Blood Kotzel.
Posted by Zak Claxton at 6:51 PM 0 comments

I was feeling in a pretty relaxed and happy mood today when I took the stage at the California building at San Diego in SL. I think one of the reasons was that I had a terrific weekend, thanks in good part to having had Triana Caldera, a terrific friend from SL, come hang out with Kat and I. She left very early this morning, and we'll miss her until the next time we can cross paths again in the real world. It'll happen.

Back in SL, though, it was cool to have Triana pop up at my show in San Diego, only a number of hours after she left here in LA and flew back to the midwest. And we did have a terrific show today, I believe. Voice and guitar both felt pretty good, and I think the set list worked out nicely. In fact... 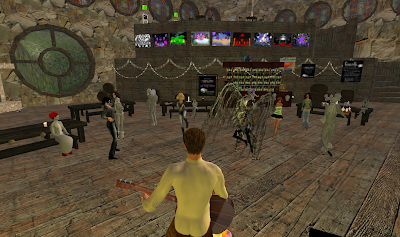 As you readers know (hey, wait: are there any readers of this blog? I never know for sure. Not terribly worried about it. You, random reader, are welcome and even encouraged to make comments and stuff, but don't feel compelled to do so. No pressure), I had a cold, and colds are not conducive to great musical performances, generally speaking. And truth be told, more importantly, I really felt like crap. If you've seen a Zak show, you know that being all sick and downtrodden doesn't jibe with my vibe.

Anywhooooo, I had a show today that I've been waiting for like a year to play! And I don't think I'm exaggerating. I've seen at least a dozen shows at The Jester Inn, and I always dug it there. Every so often, I'd hit up Harrie Skjellerup to see if she had an open slot where I could do my show. I really knew I'd be a good fit there, but we could never seem to get it together. Finally, with perfect timing, Harrie got in touch with some open dates just as I was getting ready to reach out and book some shows, and I jumped on it.

What can I say about today's show? First, we had an awesome crowd. I know we passed 40, but it was more than the head count that mattered. Some of my favorite people in SL popped in, including some of the most hard core live music fans. It was their enthusiasm that made me feel at home at the Jester, and I think as my comfort level grew, I channeled that into doing a pretty fun show. I know I had a great time!

Since it was my first show back after a sporadic start to 2009, I kept the set list pretty conservative (for me). But all the songs went over really well, and I'm really looking forward to my next adventure there! 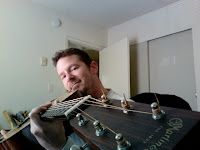 Here's a little between-show update for ya.

You may have noticed I had to do an extremely rare show cancellation last Sunday, when I was supposed to have played Cafe Diego. I think I'll be excused when you understand that the hideous rhinovirus managed to find its way into my upper respiratory system and negate the possibility of my performing live music.

Yes. I had (cue ominous horns here): the common cold. And I still do, actually, but I seem to be over the worst of it. I'm going to start trying to sing a little this coming weekend, and by my upcoming show next Tuesday 2/17 at 1:00PM (my debut at The Jester Inn), I should be ready to get back to my high standards of Zak Rock.

In other Zak-related news, I'll be soon scheduling my next recording session, trying to keep the ball rolling for the album release in 3-4 months. We have some great songs still to get recorded, and some that have been recorded but need to be mixed ("Thanks Anyway" and "Always Tomorrow" will be really great to hear when they're ready).

In the meantime, I'm somewhat enjoying this very rainy Friday the 13th, and wish you well until we meet again.
Posted by Zak Claxton at 2:27 PM 0 comments

Having heard this morning that Buffalo Springfield drummer Dewey Martin had passed away, I realized that there was a song I'd been meaning to cover that Neil Young had written for the last Springfield album. Neil also does a terrific solo performance of this song on his recent Sugar Mountain - Live from Canterbury House 1968 album, which I highly recommend.

Since it's a midweek point when I don't have any shows scheduled until Sunday (and you should plan on seeing me on 2/8 at 3:00 at Cafe Diego, by the way), I thought some of you would enjoy checking out an actual complete list of the musical influences of Zak Claxton. I've never put this out in any comprehensive way before, but I certainly don't mind going on record with this stuff; if not for the musical inspiration of these people, I have no idea how my life would have turned out. They deserve the mention at the very least.

You may note there aren't many modern artists on the list. That's not because I don't listen to new music or I'm not continually influenced by new songs I hear... I do, and I am. But to qualify for the list below usually takes years of exposure. I'm sure more artists/bands form the '90s and '00s will make the list in years to come. And another note: though these bands/artists all may be influences, it doesn't mean I listen to them all the time. But they were certainly big for me during my formative years as a musician.

And the most important note: some of these artists had a huge influence over my styles of performance, or songwriting, or singing, or guitar playing, or arranging, or music production, or whatever. Others may have only had a song or two I enjoyed, but still found their way into my subconsciousness enough to influence my own music. Yet others may have influenced some specific aspect of my music, like my guitar leads, or my bass playing, or background vocal technique, rather than an overall influence that I get from bands like the Beatles, or Neil Young, or Joni Mitchell. In any case, though the order is alphabetical, the priority certainly isn't. 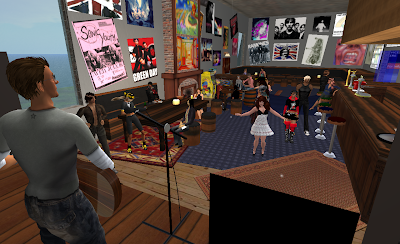 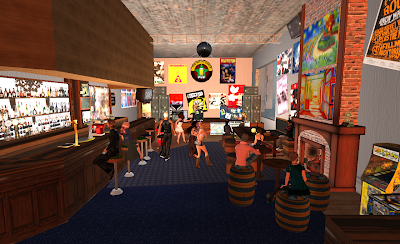 So, what better way to spend the time before the Super Bowl started than to play a completely rocking show at The Notes Shack? I'd say everyone there today (myself included) had a much better time than if they'd been eating cheese doodles and watching the ninth hour of pre-game shows. This was my first time at the Notes Shack since it closed in the Fall and moved to a new location with a complete redesign -- it just re-opened a few days ago. And it was definitely awesome; the crowd was great, everyone was being fun, and I was inspired to rock like there was no tomorrow.

We definitely got a little adventurous with some tunes, including the first time ever performance of a Steely Dan tune that I'd never tried before (see rather silly example below).