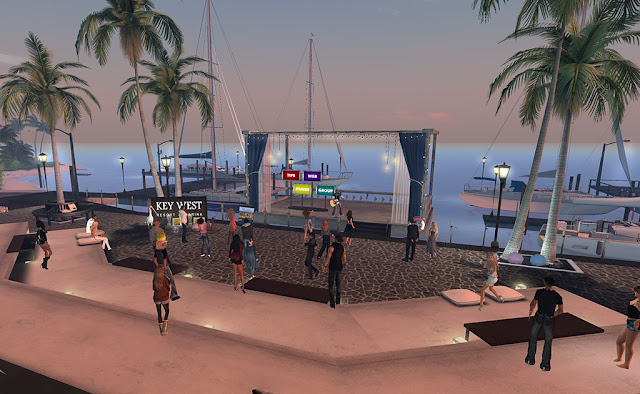 Hi there. Yes, I missed you too. And frankly, I hadn't expected to be writing a post about a Second Life live music performance for awhile longer. As some of you know, just last week, I'd been working at the NAMM Show, a big trade convention for the industry in which I work. It's pretty typical for me to be either sick or completely without a voice for a week or so following NAMM, but for whatever combination of lucky reasons, just a few days afterwards I was feeling good enough to perform music.

But I still didn't have a show scheduled until February 6, so the point was moot until yesterday morning, when my manager Maali Beck pinged me on Facebook.

It's always obvious when one is being solicited for a show as a fill-in for someone else. No one with the organization skills of Key West owner Liz Harley waits until the day of an event to book her talent. That having been said, it took me roughly three-tenths of a second to tell Maali that I was indeed interested in performing. For years, Key West has been one of my favorite places to play in SL, and remains so today. I quickly sent out some notices to people that - surprise! - I'd be doing a show that evening, and later spent some quality time with my guitar that had sat dormant for far too long while I was immersed in my business activities. 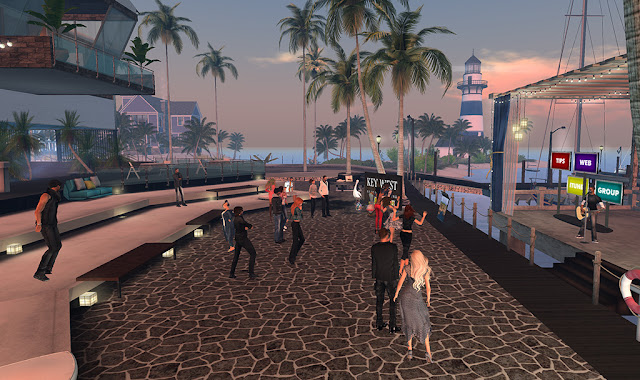 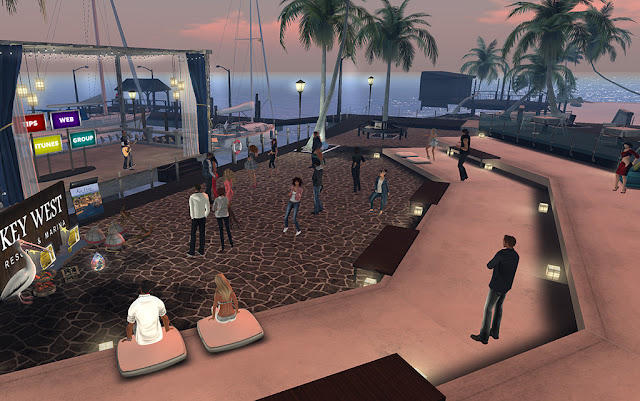 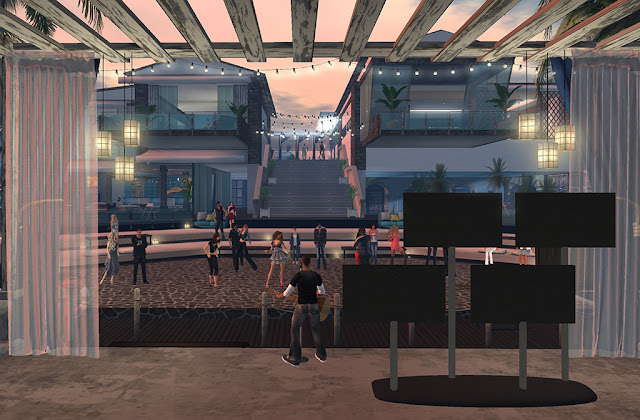 One thing that was clear to me; it was my first show since a large batch of musical heroes, some very important to me, had passed on. Without wanting it to be any kind of morbid affair (my shows are fun, dammit), I couldn't do the show without giving some kind of acknowledgement to those recently-deceased musicians. I think it went really well, and my audience seemed to agree. Bowie has always been a regular in my set list, but I enjoyed doing the Glenn Frey-penned Eagles tune, and any opportunity to play "Ace of Spades" is welcomed.

It's awful that my first blog writing of 2016 is about the death of David Bowie. The last thing I'm going to do is write an obituary; there are already many great ones all over the Internet... here, I can Google them for you if you'd like. Instead, I'm going to share a few personal observations that you might enjoy.

The First Real Music Video I Ever Saw
MTV started broadcasting in August 1981, but music videos had been around before that. Most of them were simple videos where the band would uncomfortably pantomime performances of their song, but there were a few that were mini-movies that used the song as a soundtrack to images that comprised an art form unto themselves. It shouldn't be surprising that Bowie was one of the earliest video innovators in this regard.

A very vivid memory of mine stems from 1980. I was in middle school, and was spending the night at my friend Ian's home. We did things that kids often do, like staying up way past our usual bedtime. I recall that we were watching a show... perhaps "Don Kirshner's Rock Concert" or Wolfman Jack's "The Midnight Special", and this thing came on. It was unlike anything I'd ever seen. David Bowie was shown in scenes alternating between being in a radio station DJ booth, and walking the streets of New York being accosted by multiple people. I was impressed by both the song and the gender-fluid performer in the video. It remains great to this day.


Everyone Else Gets It, and I Get Annoyed
By April 1983, I was a freshman in high school, and had gained a good level of familiarity with Bowie. After all, he'd already reached an iconic status via his many artistic personalities that spanned from his youthful "The Man Who Sold the World" era through his early rise to international fame on "Ziggy Stardust", through his less popular but critically-acclaimed work in his "Berlin Trilogy" era. I was a huge fan of what was then his most recent work, the album Scary Monsters (And Super Creeps).

That's when Bowie exploded into mainstream popularity once again with the release of Let's Dance, which is probably the most pop-oriented work he ever did. And that was another first for me; it was the first time that I felt the hipsterish emotion of, "Hey, I've been into this guy for years... who do you people think you are? Where have you been? What right do you have to like Bowie?"

The answer was that they had all the right in the world, of course. I've managed to suppress those feelings for the most part in times since. Bowie did his "Serious Moonlight" tour after that, which I saw in August 1983 at the Forum. He had already headlined the US 83 Festival in May, which I'd sadly missed.


My Most Covered Artist
This is probably not a big surprise to any of the Zaksters of the world, but I've actually covered more Bowie songs that any other artist. More than The Beatles, more than Neil Young, more than even Joni Mitchell. Here is a list of the Bowie songs I've performed... occasionally with bands, but mostly as a solo artist (since his songs tend to translate well to just about any performance style). In order of their original release:

That's 31 songs from one artist, and that doesn't count the dozens and dozens of other artists' songs I've covered that were blatantly influenced by Bowie. It's not that there haven't been plenty of other great musicians whose music I loved enough to want to play it in front of other people. But there were none whose collective body of work was so amazing that I was continuously compelled to play it over and over again. Please note that I've continued playing even the most recent music by Bowie, doing multiple tunes from his great 2013 album The Next Day. 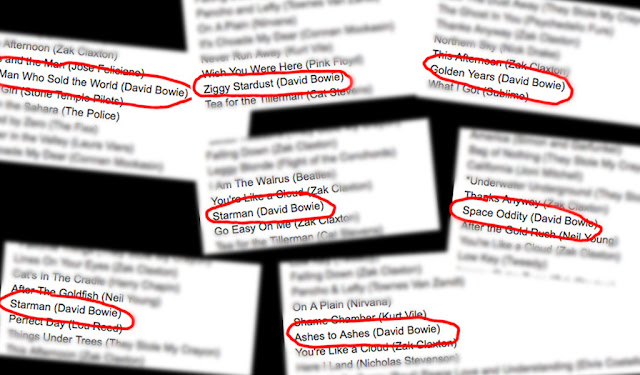 Yesterday, Today, and Tomorrow
Somewhat ironically, the directly previous post on this blog was one I wrote on December 27, and it was my list of my "Top 15 Alternative Songs for 2015". Note that one of those songs was Bowie's brand-new "Blackstar", a song that was as innovative and mind-blowing as anything he'd ever done. Here was a man who knew he was dying, and yet was capable of cranking out a song that was every bit as vibrant and incredible as one would expect from the man who basically originated the entire "art rock" genre.


It's my prediction that 50 years from now, kids will still be discovering Bowie as I did in my youth, and still understand instinctively that this was an artist who went beyond the limitations of his peers. His music will last for eternity, or close enough to it as any musician could hope to accomplish. Instead of immersing myself in grief over my loss of David Bowie, I'm choosing to consider myself as being so lucky that I lived in the same era as this man.
Posted by Zak Claxton at 12:06 PM 0 comments