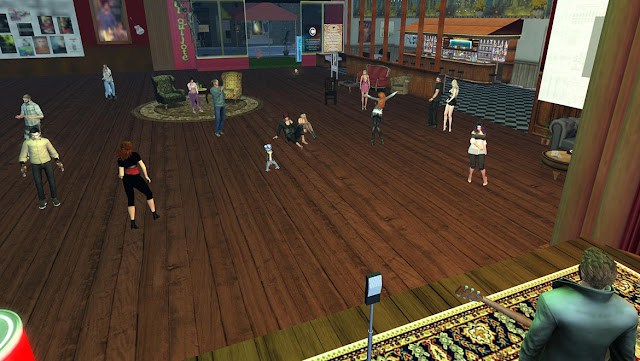 Another fun night with music and happy people at Hotel Chelsea. Photo by Kat.

I was going to be a smart ass and start this post by writing, "Happy New Year!", since I haven't really had the time nor the energy to post yet in 2021 despite it now being February. What's happened since my last post on December 31?

Well, there was the insurrection against the United States on January 6, and the inauguration of president Joe Biden and vice president Kamala Harris on January 20. The former of these events led to a second impeachment for former president Trump, which is still an ongoing matter even after his departure from office; the latter has led to a whirlwind of presidential actions that have already undone much of the damage caused by the Trump regime. While I certainly supported Joe in the general election, I have to admit that his performance during his two-week tenure as POTUS has actually been much more impressive than I'd anticipated. 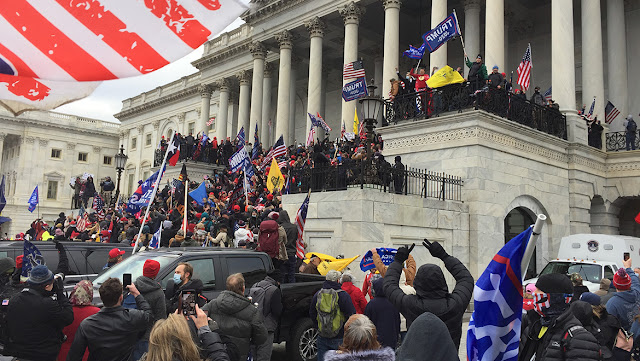 January 6: insurrectionist assholes unsuccessfully try a coup against the USA. 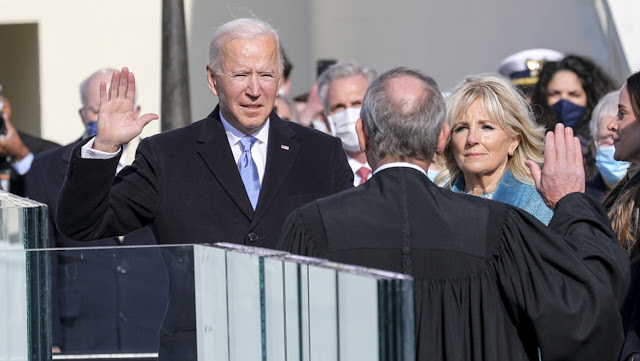 January 20: Joe Biden being sworn in as the 46th president of the United States.

And then there are the things going on with me personally. January is always my busiest month of the year in my marketing communications business. Usually that involves a huge in-person trade convention, but even though that was negated by COVID-19 this year, my clients still had massive plans to help announce their new products around the same time. As a result, I was even busier than usual, and as a result held back on doing any live music performances for the entire month.

I'm Back
But that's done now, and it felt great to get back to doing something that I genuinely enjoy, which is getting back on a virtual stage and performing music for people. A quick side note: playing live music is a physical activity. It really is. It's a good thing that I've continued my routine of exercising each morning, because I definitely felt the level of effort in playing guitar and singing for an hour last night. It felt good, really, though I managed to work up a pretty good sweat in the process. It's just something that if you don't do it on a regular basis, the physical effort becomes much more apparent. Like any kind of exercise, it's easier the more you do it.

Max Kleene had the slot before me at Hotel Chelsea, and not only was it great to hear him do his thing as one of the more talented and entertaining live musicians in SL; it also meant I had a good-sized crowd already there as I began my show. It's just easier that way. Having folks there when I start my show puts me in a good mood before I've even started my first tune, and that reflects on my performance as a whole.

Polishing Off the Rust
That being said, I definitely felt a wee bit rusty when I kicked off my first couple of songs. It wasn't terrible or anything; I just seemed a little tentative. It's a well known fact among the community of the performing arts -- musicians, actors, dancers, and so on -- that the enemy of a good show is self-consciousness. I am only at my best when I am able to fully escape my focus on myself, and instead become immersed in the music I am performing, and my engagement with my audience. 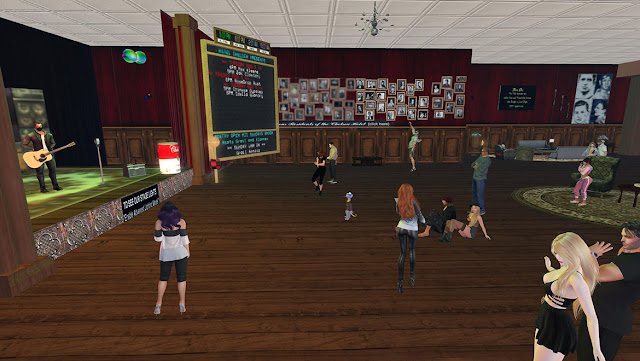 It had been so long since my last show, I forgot to start a guitar-strumming animation for my first couple of songs. Whoops. Photo by Kat. 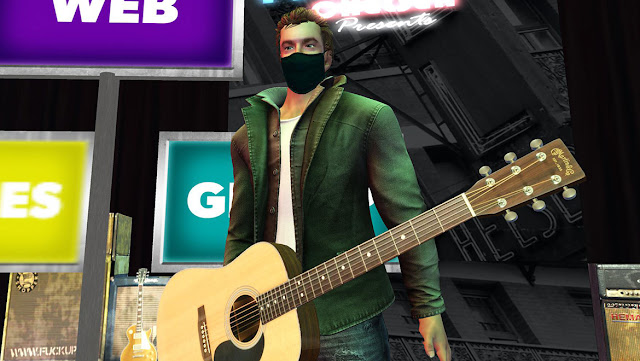 As has been the case for all of my shows since March 2020, I wear a mask in SL as a reminder that masks save lives. If that bothers people, that's their problem, not mine. Photo by Kat.

But as I said, that only took a song or two, and then I felt really at ease just doing what I do. I remember reading that Mick Jagger, one of the greatest showmen in the realm of rock and roll, having to remind himself that "This is what I do" before each performance, especially at the start of a tour. Well, I've been performing live music for people on a pretty regular basis for over 40 years now. 80% of my life, I've been playing instruments and singing in front of people. Any time I get too concerned about the quality of my show, or too focused on the perception of myself rather than what I'm performing, I really just need to step back and like Mick, remember that this is what I do and this is who I am, and then the rest comes easily and naturally.

How I Put Together My Set Lists
I think I've mentioned this before... I've probably mentioned everything before. But it's worth repeating.

Every artist and band has their own way of creating a list of songs that they'll be performing at any given show. For most large-scale bands on big tours, the set list remains virtually unchanged, night after night. It's simply easier that way; the band rehearses a certain set of songs to the point that they can be performed masterfully. The length of the set is predetermined, making it easier for venue logistics. Everything from the lighting to the projections to other aspects of the show can be pre-planned and repeated precisely. 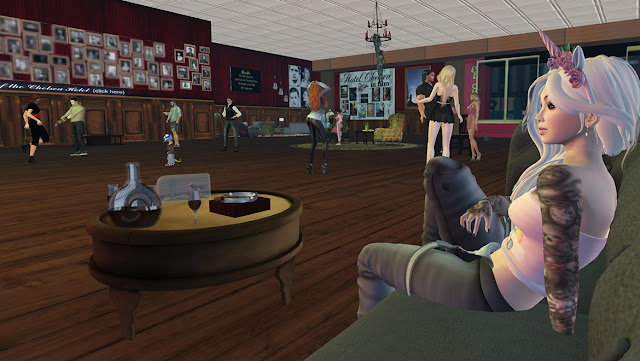 People chilling and enjoying the show. Photo by Kat. 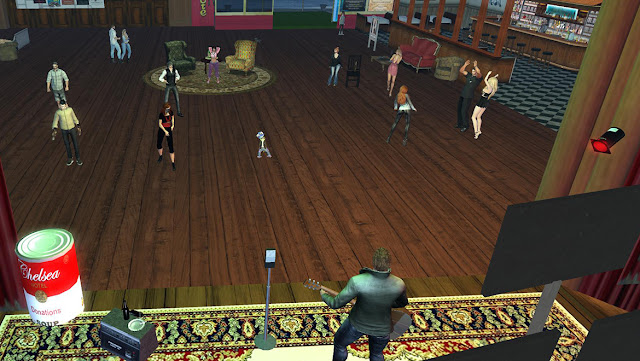 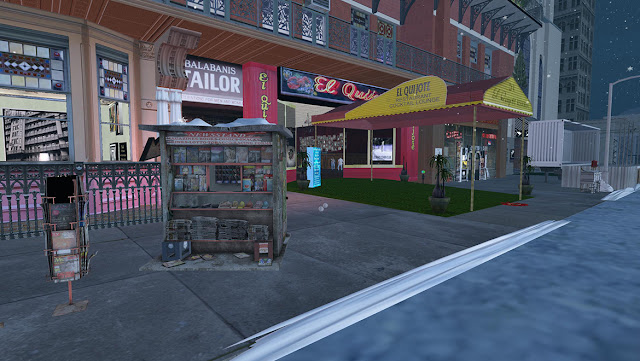 Outside, it's a pretty neat build, and very reminiscent of the New York City area where the real Hotel Chelsea is located. Photo by Kat.

In Second Life, it's obviously a lot different. Most artists -- probably the more popular ones -- have a list of songs that they offer to their audiences, and then play upon request. That's cool, and fun for the crowd. For them, it's like being able to choose a song on a jukebox, and I imagine that those artists do very well in tips from people who choose the music for them.

I do not do this. It is my strong preference to play songs that I'm really feeling at the time of the performance, and I specifically curate each of my sets to match whatever vibe I'm experiencing while preparing for the show. Sometimes I put together a theme for the show. Other times, it's merely based on the mood I'm feeling that day. And yet other times, my song choices are influenced by current events. Last night, I made sure to do a song that acknowledged the start of Black History Month, and I also did a John Prine cover for the first time, having gotten into the song by a version recently released as a duet between John and Kurt Vile.

Thanks to everyone who came by the show at Hotel Chelsea, with super extra thanks to the following people who helped support it!
Trymetwice Resident, LillyAnnSetner Resident, Nina Brandenburg, blonde Avon, Kat Claxton, Maximillion Kleene, noowun Wind, Trouble Streeter, my terrific manager Maali Beck, and Hotel Chelsea manager Shyla the Super Gecko!