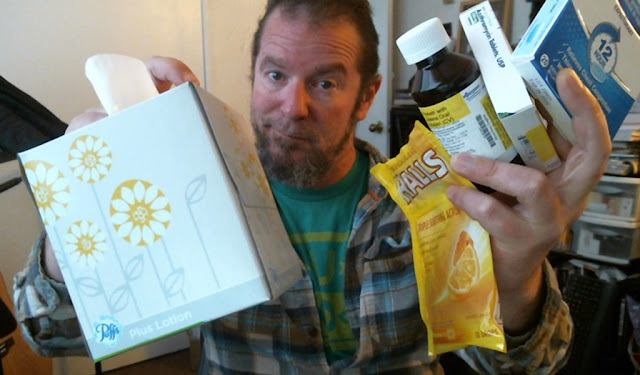 I'm the worst at seeing doctors. Why? First, like millions of Americans -- especially those like me whom are self-employed -- I'm uninsured. Second, I tend to underplay any physical malady... probably a result of my upbringing, when men were told to "tough it out" when injured or not feeling well. Third, I've had a few experiences where seeing a doc was a bad experience that, while being expensive, also didn't fix whatever was going on with me at the time.

Well, those are all understandable reasons, but they're also stupid. Let me get to the point.

On Friday 12/1, I awoke with a bad sore throat. That was less than shocking; my son had been sick, and I'd spent the previous afternoon with him at a meeting at his school. Also, about half the people I know had been similarly ill in recent times. I figured I'd suffer with this minor virus for a few days, get better, and go on with my life. I certainly wasn't going to run to a doctor for a cold, which is ridiculous. I did have to cancel a live music show that I'd had scheduled for Monday, but these things happen.

Getting Better, Getting Worse
By the following Tuesday, my throat was much better, and the illness had predictably wandered toward into my lungs. Again, no big thing. A little annoying coughing and sneezing, and I'd be better in no time, right? It seemed this plan was going to work out; I was feeling more chipper within a couple of days... until nighttime came around. When I'd lay down to go to sleep, the goop in my lungs would send me into these horrible paroxysms of coughing that just wouldn't stop. I'm talking 45-60 straight minutes of horrible coughing where I was barely able to catch a breath here and there. It was awful.

And still, I had no plans of going to a doc. I got some more over-the-counter meds to try and make my lungs work more effectively, and those seemed to help a bit. But the coughing fits were becoming more and more severe and painful. As some of you may recall, back in 2012 I got a pretty serious case of pneumonia. It was my second pass at the ailment; I'd first had it in 2007. Well, some of the symptoms I was experiencing were frighteningly reminiscent of what I'd been through before. Both of those previous times, I'd waited until it was close to emergency mode, where my doctor said that if it was any worse, I'd be hospitalized.

I guess one gets a little wiser as one gets older. If you don't, you just... don't get older, if you get my drift. On Saturday night, despite having been trying to rest and get liquids and take my OTC meds, I had a coughing fit that was the worst one yet, and I made the decision right there and then -- perhaps with a little persuasion from Christina -- that I was going to nip it in the bud and see a doctor.

Easy Like Sunday Morning
Once again, morning arrived, and I was feeling pretty good... and that meant that once again, I started talking myself out of seeing a doctor. "I feel completely silly going to the doctor with a cold," was what I said. But memories of the night before lingered, with my keeping Christina up into the wee hours while I struggled to breathe, and the pain and misery that accompanied it. Keep in mind, there were no specific signs of something worse going on. I couldn't hear my lungs making any odd noises as I took deep breaths, and as long as I was upright was able to control the coughing. i didn't have a fever. I was able to function mostly normally.

I was actually apologizing to the front desk at the urgent care center, saying, "Look, this is just a cold, but I'm only here in the off-chance it's something worse," and so on. They checked my vitals, which seemed pretty decent. And then they took a chest x-ray, and sure enough, I had a noticeable infection in my lungs (which is likely in my sinuses as well). It's basically "pneumonia light" which, had I let it keep getting worse for a couple days would have absolutely grown into full-blown pneumonia. An important side note: once you've had pneumonia, your likelihood of it coming back goes up exponentially.

I will be fine, and after one day on heavy antibiotics -- a shot of Rocephin in my ass and starting a course of azithromycin -- I'm already much better. Big thanks to the folks at Ocean Medical, as usual. I'll continue on my antibiotics and keep my liquid intake heavy and get rest, as one should. But my hesitance to go see a doc could have had dire repercussions had I not gone in. I don't need to go into the details.

Just Go
Look, I get it. No one wants to feel like a hypochondriac or a wuss. No one wants to pay for expensive medical treatment over what might end up being something minor. But the flip side of taking care of an illness early on before it becomes life-threatening beats those excuses into the ground. I'm very glad I went, I'm glad I'm being treated, and I'm glad I'll be getting well quickly. Next time you have a minor illness that just isn't going away on its own after a reasonable time frame, just bite the bullet and see a doc. Even if just for peace of mind, it's worth it.
Posted by Zak Claxton at 9:21 AM