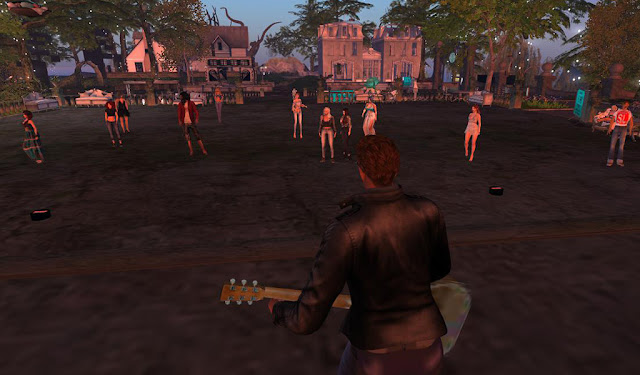 Enjoying another Monday night at Serenity Gardens. Photo by Triana Caldera.
Happy July to you all! 2019 is already half over, I've already lived half of 100 years, and half of this post is going to be about my show at Serenity Gardens, I swear. If the next section annoys you, go ahead and skip down to the section below and you can read about the important topic of my playing live music as a cartoon in a virtual world.

Protest the Camps
The other half is this short statement about the inhumane treatment of asylum seekers at the US southern border. Look... I'm not in favor of open borders, I promise. When I talk about immigration reform, it's to better allow us to legally process people who want to live in the USA, and to facilitate their lives to becoming good and productive American citizens, as so many have done before them (almost certainly including your own ancestors).

But until we have a better process, we have a responsibility to treat immigrants in a humane fashion. I'm sure you've heard about and/or seen the conditions at the Customs and Border Patrol processing facilities. Children are being separated from parents, people placed in overcrowded and jail-like conditions, and worse. The things is, the conditions at the CBP camps -- and the reported abuses by ICE and CBP agents -- are not an accident. They are designed to terrorize and punish people who have committed no crime other than wanting to be American. 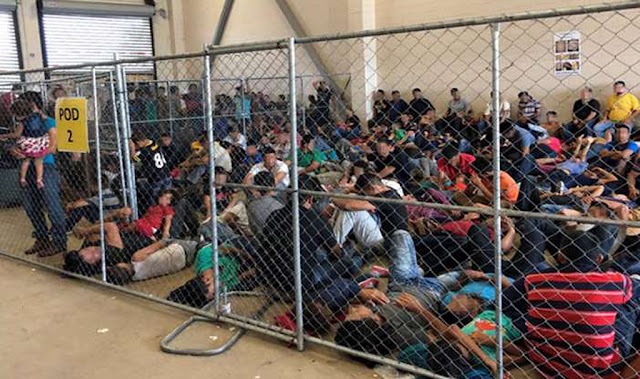 treating humans with dignity and respect should be the goal of any civilized society. Photo from news article "'Help': Photos show hundreds of migrants, children crammed in overflowing border facilities"
I therefore recommend that you keep abreast on information about what's happening at the border, and make your voice heard to your government representatives that you will not tolerate this practice, and will not vote for any politician who allows or confines it. Today, in fact, is a nationwide protest effort to help raise awareness and start the process of restoring dignity to the process of accepting immigrants... learn more here. And that's all I'm gonna say about that. For now.

Rocking Serenity
I arrived for my show and was happy to see and hear my friend Grace McDonnough doing her set before mine. It puts me in a good mood whenever she's on stage before me, which seems to be each Monday night I play at Serenity Gardens.

I've been having a bit of a problem with the joints on my fretting (left) hand. I suppose that 40+ years of playing guitar might be the culprit. But, I'm happy to say, despite having done shows on both Sunday and Monday evenings, my hand wasn't too complainy during or after the show. I'm sure it's probably the onset of some kind of arthritis or similar disorder, but it's not enough for now to inhibit my playing. 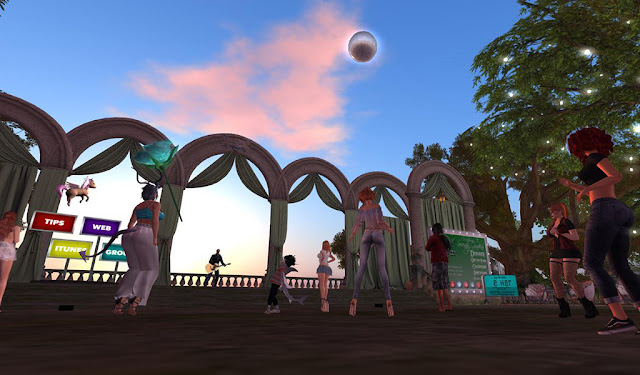 A lovely evening of live music in a virtual world. Photo by Triana Caldera. 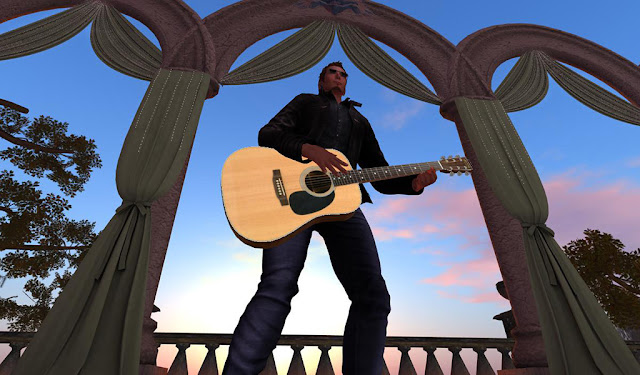 Me. Photo by Triana Caldera.
One thing I did enjoy doing was a little Americana-based mini-set in the middle of my show. I don't necessarily plan those things, but when I'm pulling out ideas for my set, I think often there's a subconscious aspect where I'll be leaning toward some specific area based on my personal vibe of the moment. Anyway, that worked out just fine. Beyond that, we had a good little crowd of people who seemed to definitely be enjoying themselves, and as usual, I also had a good time along with them. What more can you ask for on a Monday night?

Thanks to all who came out to my bi-weekly Monday festival of fun at Serenity Gardens, with special thanks to the following who helped support the show.
Nina Brandenburg, AaronCabottJones Resident, Trouble Streeter, Tyche Szondi, TheaDee Resident, Triana Caldera, hynesyte Harbour, my manager Maali Beck, and the fabulous team at Serenity Gardens, Tilly Rose and Ilsa Wilde!
Posted by Zak Claxton at 1:27 PM