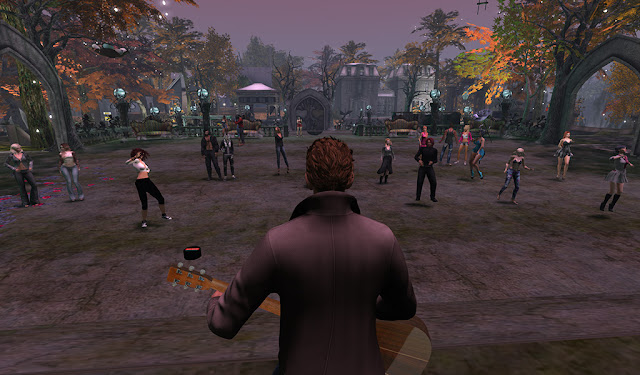 People tend to say that we don't have real seasons here in Southern California, and they're mostly correct. Throughout the year, where I live in a suburb of Los Angeles called Redondo Beach, the temperature variance is minuscule compared to most of the world, and actual severe weather -- storms, extreme temperatures, and so on -- are almost unheard of. With few exceptions, about the worst it gets here is a bit chilly or rather warm. So what difference does autumn make versus summer?

Weather information on Redondo Beach, CA. My city has some of the best weather in the world, and certainly ranks more favorably than just about anywhere else in the USA. Chart from city-data.com.
There's something about the fall season that is still very appealing. The slightly cooler temps, the more focused vibe compared to the lackadaisical summer months, the holidays, football season... there are tangibles such as these, but also a lot of more nebulous aspects that make autumn my personal favorite time of year. Since my bi-weekly Monday night show at Serenity Gardens happened to occur literally on the first day of Fall 2019, I wasn't going to miss the opportunity to curate a set list that paid some homage to autumn, and I did just that. But before I talk about that, I want to mention some stuff about streaming music and digital distribution.

How Do People Listen To Music in 2019?
I'm not going to get into a big dissertation on this topic; many others have done it already and done it well. I will state the simple and obvious facts, though.

From the 1930s through the late 1990s, the only choices that people had to listen to music were a) through physical media, like a vinyl record, a Compact Disc, a cassette and so on, or b) on the radio or other broadcast medium (like MTV when they used to be a music channel). If you were a recording artist, your income was based primarily on how many pieces of physical media you could sell. Back in those days, concert tickets were cheaper because the live show was primarily meant as a vehicle for artists to promote their latest recording.

We all know what happened after that. The Internet increasingly became part of our lives as the new century got underway, and anything that could be digitized and moved around the world in a blink of an eye was done so, and one of the first things that was affected by digital distribution was music. It started out illegally, with people taking songs off of CDs, moving them into their computers, and posting them on peer-to-peer file sharing services. Eventually, like many things, big business saw the opportunity to use the technology in legitimate ways, and people began paying for and downloading music with systems like Apple's iTunes.

This was fine; artists still received a reasonable level of compensation from paid downloads. But the next thing that happened in the flow of technology was the elimination of the need to "own" the music. It could reside in a cloud, and people could access it anywhere they had an Internet connection (which these days is pretty much everywhere). Instead of purchasing songs and albums, people could just stream the audio... to their homes, their phones, their cars and so on. However, what changed drastically for the artists who create the music was the compensation. Instead of receiving $0.70 for a downloaded song, they got fractions of a penny for that song being streamed. Artists who get thousands of songs streamed in a month would get a royalty payment of a few cents. If you wonder why concert tickets are now often hundreds of dollars, that's why. Musical artists have no real means of income other than live performance.

Why am I talking about this today? Well, my band They Stole My Crayon made the decision at the time of our album's release in 2016 to forego digital distribution via streaming services. We knew that any possibility of at least being recompensed for the costs and time of recording our music would be negated by the tiny payments from streaming services. However, the reality in 2019 is that in many cases, if your music isn't on Spotify and other popular services around the world, in some ways it might as well not exist. We have been very happy with download platforms like Bandcamp, but that is still considered kind of an underground service for indie artists.

Some of these online music store logos will be very familiar to you; others you've probably never even heard of. But these are the places that attract people in various territories around the world to discover and listen to music, and if your music isn't there, you might as well not exist.
Interestingly, people are still more interested in listening for free than anything else. While YouTube has its own fledgling music service, they are already the world's number one platform for music listening via video uploads that don't pay the musical creators a damn penny. It's a tough battle to fight, frankly. In any case, we'll soon be making an announcement in regard to our music's availability in ways that it hadn't been previously. Last weekend, we renegotiated our digital distribution with Tunecore, and sometime in the next couple of weeks, I will be posting about new ways to experience and enjoy The Crayon's music. That's it for now.

First Show of Autumn
As I was saying, I'd looked at the calendar and noted that my show at Serenity Gardens was literally on the first day of Fall 2019, and that led me to create a set list that had a fall feel. I've previously talked about the music I associate with autumn, and last year I did a fun exercise where I posted five autumnal songs each week for the entire fall season. I was happy to have a specific focus of my performance, and I truly enjoy the vibe of autumn songs as much as any other part of the season. 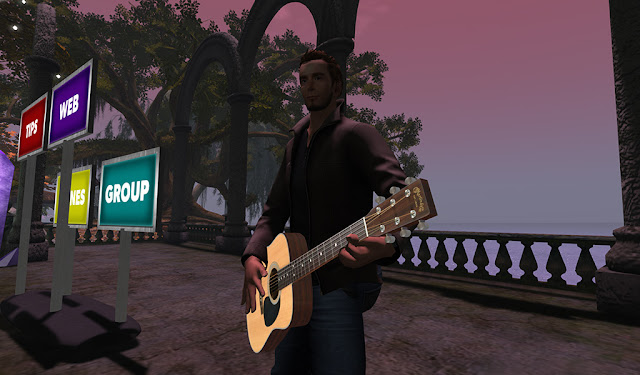 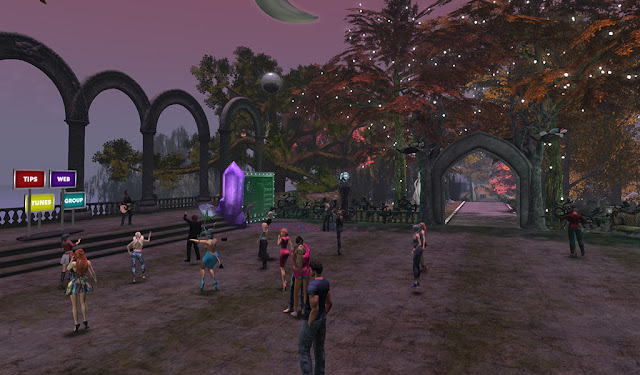 I always love the Halloween/fall decor at Serenity Gardens. Photo by Kat. 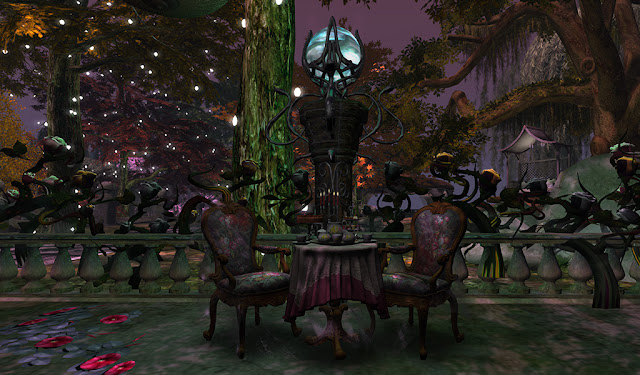 I mean, even the furniture gets spooky there this time of year. Awesome. Photo by Kat.
I should note that once again, I appreciated playing directly after Grace McDunnough... her choice of material and her lovely voice always puts me in a great mood right before I take the stage. Also, Ilsa Flannigan (Serenity Gardens owner) is meticulous about decorating the sim for the various seasons, and the place looked great all tricked out in a Halloween vibe. It's always fun when you play a familiar place that's somehow new. We had a good crowd and I liked adding a couple of new tunes to the set that played off my autumn theme.

Big ol' thanks to every person who hung out for my show, with special super thanks to the following who helped support it!
courageous Chrome, Kat Chauveau, Cory Warcliffe, Cash Benelli, AaronCabottJones Resident, Nina Brandenburg, Diana Renoir, Trouble Streeter, Alex Zelin, Kat Claxton, my excellent manager Maali Beck, and the fabulous team at Serenity Gardens, Tilly Rose and Ilsa Wilde!
Posted by Zak Claxton at 6:34 PM