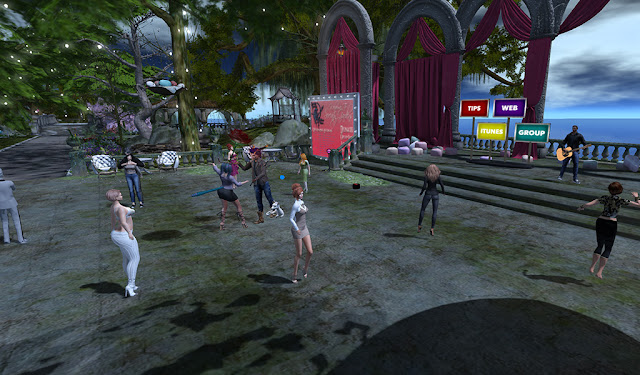 The start of Sunday was a pretty typical weekend morning for me. It was my first actual weekend in a long time, with my recent trade show behind me, and I was looking forward to relaxing (which, I'm happy to say, I successfully did for the most part). Saturday had been very chill, with a lot of time kicking back and taking care of a few things that I'd been unable to do with all the work that makes up the start of each January for me. I restrung one of my guitars, played some video games, took care of some house stuff, and everything was fine. Sunday started similarly, though I did make a run to the grocery store out of necessity. But then, like many people around the world, I got slammed with some news that was extremely shocking. I was in another room, and Christina opened the door with a look on her face that told me that some bad news was forthcoming. She paused for a moment.

"Kobe Bryant was killed in a helicopter crash," she said solemnly.

Those words didn't make any sense to me. Kobe? Kobe couldn't die. That simply wasn't possible. It had to be some kind of Internet hoax. Kobe was superhuman. He was on a different level than everyone else. He was the person who fought through every challenge, who not only endeavored to be great but to be great in comparison to greatness. People like that don't die, do they?

After a moment or two of those kinds of irrational thoughts, I did what most people probably did when they heard the news... I started scouring Twitter and other Internet sources for information. The news didn't get any better as the day went on, especially after getting confirmation that Kobe's daughter GiGi was also killed in the accident, along with a number of other people who'd been in the helicopter traveling from Orange County to Thousand Oaks. It was entirely depressing. I'm not sure how the impact of his passing is around the world and across the USA, but here in the Los Angeles area, it's particularly devastating. I actually found myself glad that my father, who passed away in 2017, was not around to experience this. He, like I, was a huge admirer of Kobe, and we spent many conversations over the years talking about Kobe's drive to greatness. 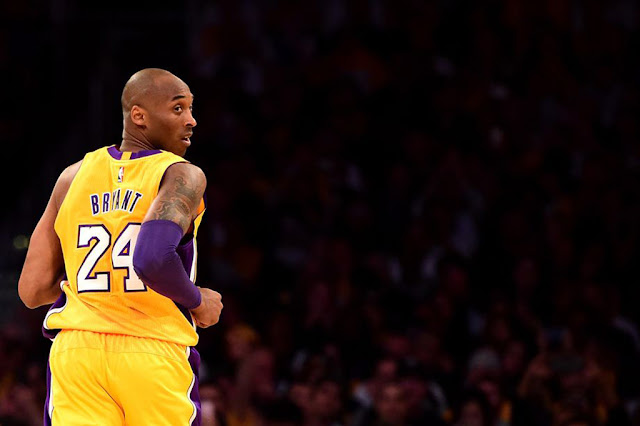 I was aware of Kobe even before he entered the NBA in 1996, at the time the youngest player in history to do so. I followed his career moment by moment, watching him play with a style that had never been seen before in the NBA. It's said that when he and the rest of the NBA players who made up the 2008 USA Olympic basketball team went to Beijing, every other player was simply astounded at Kobe's work ethic. It had always been the case, but to see it there in person was mind blowing to the other all-star players. As an athlete, Kobe was always a level above those around him.

I know very well that Kobe wasn't perfect. There are no perfect humans. I know that some people will dwell only on what they perceive are the negative actions he may have taken, and that's okay. I'm in no way negating that viewpoint. I suppose the only thing I would say in that regard is to take a close look at your entire life... everything you've done that's been good for other people, and bad for other people. Ask yourself if you will be remembered for only one aspect of your life, be it good or bad. And be honest; I'm talking about your entire life, from childhood to this moment. Again, there are no perfect people. If you are going to be remembered, I hope for your sake that a) the good you did far outweighed the bad and b) that the positive impacts you had are those that were the most meaningful to the largest number of people.

To wrap this up, just for the sake of documenting the feeling that Kobe's death has left on myself and my fellow people in the greater Los Angeles area, here's the usually jovial Jimmy Fallon in the opening of the Tonight Show last night. Like Jimmy and a lot of people, I don't shed tears for Kobe the great athlete, but rather for Kobe the great person. Flawed, but great nonetheless.


The Show
I didn't say shit about Kobe as any part of my show last night, because frankly, a lot of people have said a lot of things, and I just needed a little time where there was no focus on tragedy and negativity. All I did was play music and chat with the crowd, and have what I consider to be a pretty typical Zak Show. I found that I hadn't been being very adventurous in my set lists lately, and while I didn't pull out any brand new (to me) tunes, I did reach a little deeper into my repertoire and played a good percentage of tunes that went beyond the safe zone of songs with which everyone was already familiar.

I want to say that when I do that, it's on purpose, and it comes with a risk. People are creatures of comfort, and almost nothing is more comfortable than hearing a song that you've heard hundreds of times before. The risk is that a lot of people don't want live music shows to be challenging to them as a listener. There's nothing wrong with that, but it definitely explains why the more well-attended shows are generally by those artists who do familiar pop songs, and that's fine. It's the same thing in the real world, where beloved pop artists will sell out stadiums while lesser-known indie artists perform at small clubs and theaters. What I will say is that I'm very, very happy to offer some music that appeals to people who, like myself, enjoy the process of discovery as much as they do hearing well-performed music in general. On many occasions, through my SL shows I've turned people on to artists they might have never otherwise known about, and they became big fans of that music. That genuinely makes me proud, and I have no plans of doing my shows any other way. 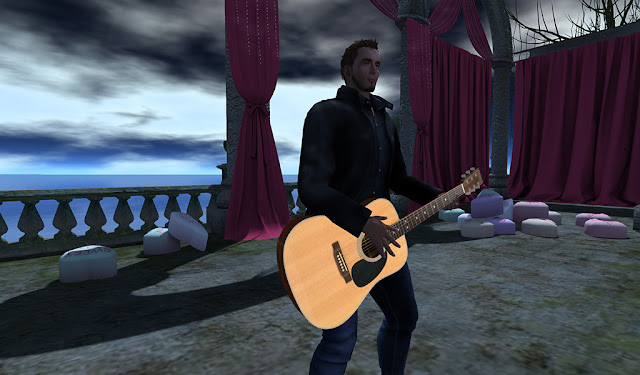 Me, rocking the songs that no one knows. Photo by Kat. 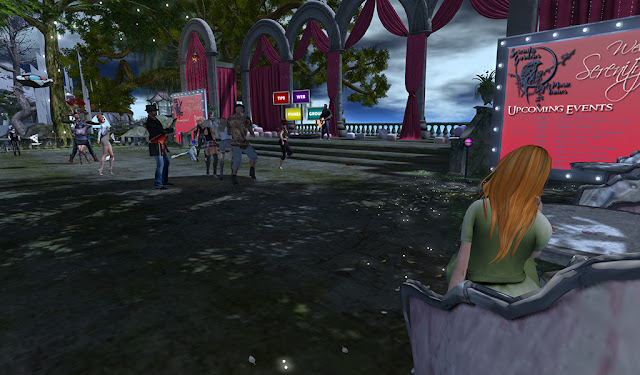 Whether the crowds are big or small, Serenity Gardens remains one of the best places to experience live music in Second Life. Photo by Kat.
One other note. While I certainly have every intention of continuing my shows in Second Life, it's also been brought to my attention that with the number of people who no longer participate in SL but had formerly enjoyed my shows there, I need to start expanding my methods of live performance, as I used to do more regularly. This is a hint that sometime very soon, I'll be letting you know about information regarding some non-SL shows I have planned. Perhaps as early as this coming weekend, it might be fun to schedule a live video show. It's been awhile since my last Zak Claxton Happy Fun Show, so don't be surprised when I appear on your Facebook feed.

Thanks to all who came out to the show, and big-ass thanks to the following who helped support it!
Kat Chauveau, AaronCabottJones Resident, Kat Claxton, Shannyn Fall, elijahem Resident, Trouble Streeter, Grace McDunnough, my excellent manager Maali Beck, and the fabulous team at Serenity Gardens, Tilly Rose and Ilsa Wilde!
Posted by Zak Claxton at 12:12 PM