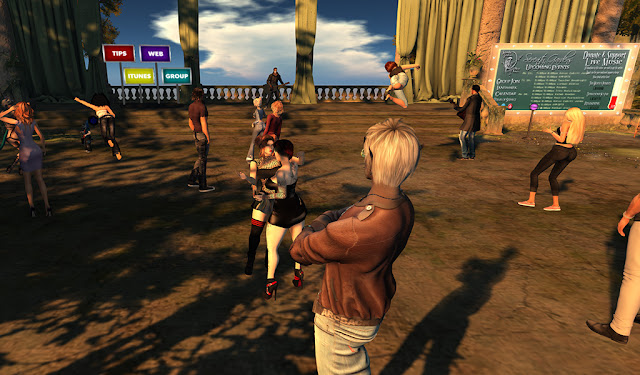 When the world gets serious, an escape to Second Life and some good live music at a place like Serenity Gardens might be just what you need. Photo by Kat.
Days in the land of quarantine are starting to kind of blend together, so I thought it would be a good idea to start this blog by doing some actual... blogging.

As a person who keeps on top of the news, the novel coronavirus had already been on my mind going back to mid-February, with reports coming out of China and then other areas like Iran and Italy about the severity of the COVID-19 disease. But, like most things in life that affect people far away from you, it wasn't really dominating my day-to-day life until early March, when COVID-19 began affecting Americans. We started hearing about people in the USA being infected by the virus, and then the stock market began its slide. That was very telling because the big money people will do just about anything to avoid the loss of their wealth. To me, it was a very telling indication that something serious was going on that would affect the entire planet.

The next thing that start happening was the rapid closures of... pretty much everything. NBA. NCAA. NHL. SXSW. E3. NAB. Disneyland. Almost all international borders. On Wednesday March 11, the World Health Organization declared COVID-19 to officially be a pandemic, and the same day, the state of California issued recommendations to postpone or cancel all non-essential gatherings of more than 250 people. The following day (Thursday March 12), my local city of Redondo Beach made a proclamation of local emergency. It was from that moment on that the people in my household began voluntarily staying in a quarantine situation. It meant that unless absolutely necessary, we would stay at home.

Lots of things happened quickly in the ensuing ten days. Specific cities and regions across the US that had been particularly affected by COVID-19 began issuing their own more strict "stay at home" orders. Those orders began expanding to entire states. California's statewide lockdown began on Friday March 20. In the most recent local developments here in my hometown of Redondo Beach, CA, they're now taking every measure to keep groups of people apart, expanding the enforcement of the "stay at home" orders and going to the length of having just closed all beaches and parks. 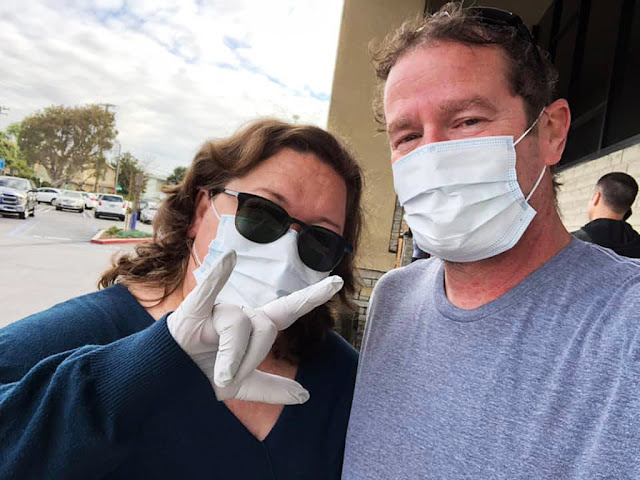 Properly protected with Christina at the grocery store.
How do I feel about it? I think every one of these steps is 100% necessary. This is exactly the type of situation where a functioning modern government can be of paramount importance to the populace... coordinating laws and providing support in a time of real crisis. It would be nice if the entire country could have the kind of leadership we do in California (and in states like New York, Illinois, and a few others). What we are starting to see is that states that didn't issue similar orders early enough are beginning to get a huge wave of new COVID-19 cases, and the capacity of their medical support systems is already reaching their limits. This whole thing is definitely going to get way worse before it gets better.

Any Good News?
Yeah, plenty of it. A large percentage of people do seem to understand the severity of COVID-19 and are participating in stay-at-home and social distancing guidelines. I see people around town wearing protective equipment when they need to go out amongst other people... not everyone, but enough that it's definitely noticeable at the grocery store or at pickup counters at restaurants. Is it weird? of course. I feel like I'm in the midst of a dystopian future novel. But it's also comforting in a weird way, now that we're used to being in this unexpected here-and-now.

On the "good news/bad news" front, my work as an online content producer has been incredibly busy for the past two weeks. As you can imagine, companies that were used to doing a lot of face-to-face business have had to immediately figure out new ways to reach their customers, and a good chunk of that task falls in my domain. So, amongst my many marketing clients, I've been in near constant demand, sometimes working 10-12 hours per day. Remember, unlike a lot of folks, I've spent the last 17 years working from home, so it just feels a whole lot busier for me than usual. It's nice being needed, of course. As a business owner, I certainly appreciate that, especially with so many people I know finding themselves furloughed from companies suffering the economic impact of the pandemic.

The Show
And that, actually, is the reason why I played this fun show at Serenity Gardens on Monday evening and am just now getting to blogging about it four days later. I'd already done a show that had some thematic references to COVID-19, but the situation got so much more serious over the ensuing two weeks that there was no way I was going to make light of it by the time my show on March 23 rolled around. Still, my SL experience tends to reflect my real life most of the time, and so I did wear a protective mask while doing my show, paralleling the look when I (rarely) go grocery shopping here in the reality of March 2020. 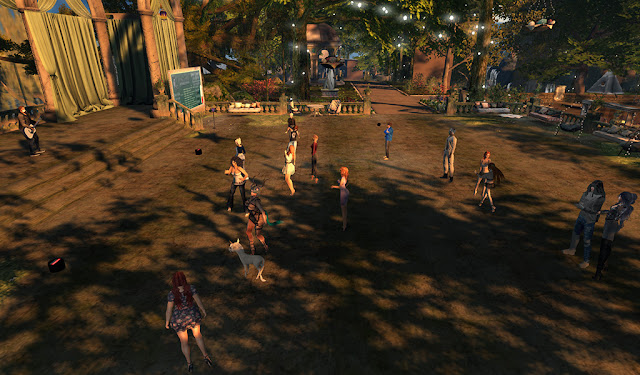 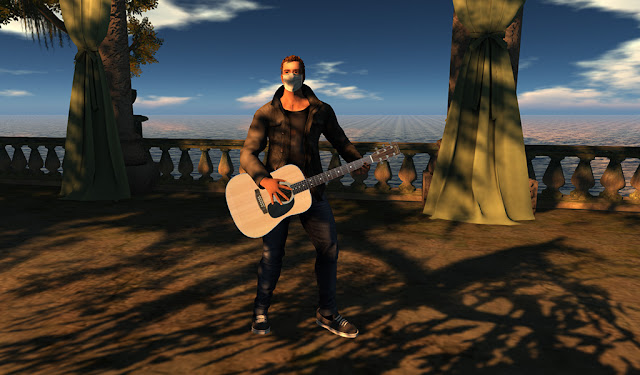 Yes... I'm wearing my mask in-world, and while I love the feeling of escaping the dismal parts of real life when they happen, it's too important to continue to remind people in the midst of the pandemic to stay focused on their own protection and that of their friends and loved ones. Photo by Kat. 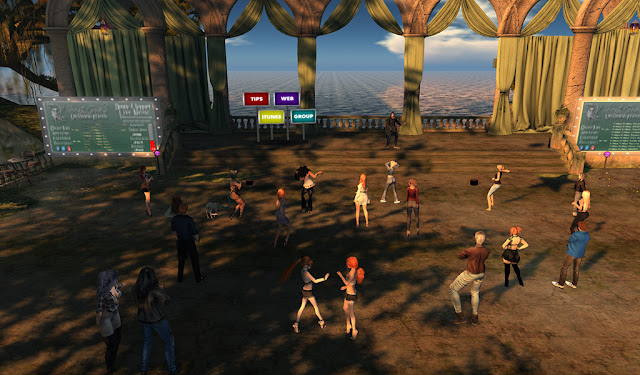 Ahhh... Serenity Gardens. Good times. Photo by Kat.
Instead, at this show, my theme was more personal. It was "songs that don't require a lot of effort to perform". Was I just being a lazy bastard? No... the previous week, I'd injured my lower back pretty badly, and for awhile wasn't sure if I'd even be able to stand up and play guitar and sing for a solid hour. But it improved and I knew I could do the show, but I also knew I'd have to be careful not to exacerbate my back problems. So I chose songs that I could do while remaining rather mellow, and it all worked out fine. We had a nice crowd there and it felt really great to have my focus be honed on my music performance to the point that I wasn't obsessed on the situation going on outside my door.