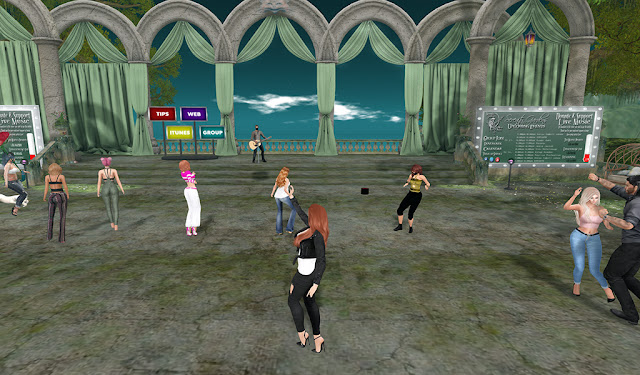 My shows every other Monday night at Serenity Gardens are as therapeutic for me and I hope they are for my audiences. We sure do have a lot of the same people who seem to come to every show. Photo by Kat.

As I write this post about my fun show last night at Serenity Gardens in Second Life, it's Tuesday August 25. That means exactly 10 weeks from today, on Tuesday November 3, is the general election in the USA. And let me tell you right now... if anyone says they know for sure what's going to happen, they are lying or just simply wrong.

Polls: Don't Believe Them
Let me tell you a little story from a year called 2016, which was actually just four years ago but feels like about 1,000 years ago. Anyway, at this point in late August 2016, all of the major polls were telling us that it was all but certain that Hillary Clinton was going to be the next President of the United States. In a usual year under typical candidates, that probably would have been accurate. But a few things happened.

First, the polls themselves were at least partially to blame for a large percentage of people simply not voting. Many folks assumed that with an easy victory for Clinton in the bag, they didn't have to vote... and many of them did not. Clinton herself, while being an imminently qualified candidate, was not extremely well liked, with a lot of baggage on her from her tenures as First Lady, Senator, and Secretary of State. There was also the undeniable aspect of the USA not having ever had a female President before, and the sad specter of misogyny definitely came into play.

And finally, as has been well established (and will continue to be investigated, and punishments sought), the United States was the victim of foreign interference in our 2016 election. So, while Hillary Clinton won the popular vote, she lost the electoral vote and we ended up with Donald Trump as President. I'm not saying that pollsters are out to purposefully mislead you... but the game has changed drastically with a man like Trump, who lacks any sense of morality, and will stop at nothing to cheat his way into a second term. 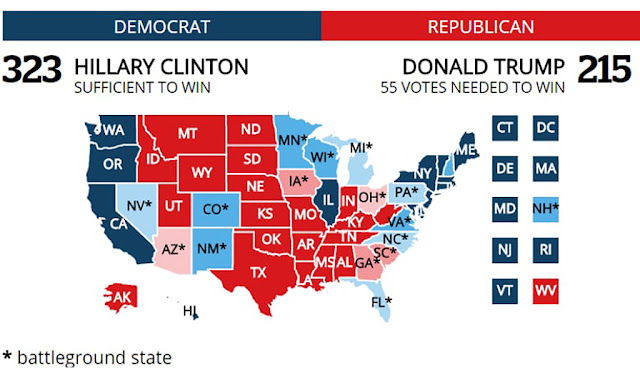 A poll from October 4, 2016 (about a month before the election) told us that Hillary Clinton was all but certain to become the next President, and probably by a large margin. Most other polls had similar results. No matter what you hear, assume that Biden has no chance of winning without your vote... because it's true. Graphic by CBC News.

What's the solution? Ignore the polls no matter what they say, and vote. Vote any way that's legally permissible, and encourage literally every eligible voter in your circle of family and friends to vote. Vote in person, or vote by mail. If you need some help on how, when, and where to vote, the Vote.org web site can help you every step of the way. If you want my direct assistance in voting or registering to vote, drop me a comment below and I will personally make sure you get the info you need.

A Song for Diana Renoir
Who is Diana Renoir? She's one of my most longterm friends who I met via Second Life around 12 years ago. At my show, I did something at the behest of Diana that I do very, very rarely. As I've stated many, many times, here and elsewhere, unlike the majority of SL musical performers, I don't take song requests. Instead, I plan out a set of tunes that I feel will combine to make a theme or a vibe that goes for the hour-long duration of my show. 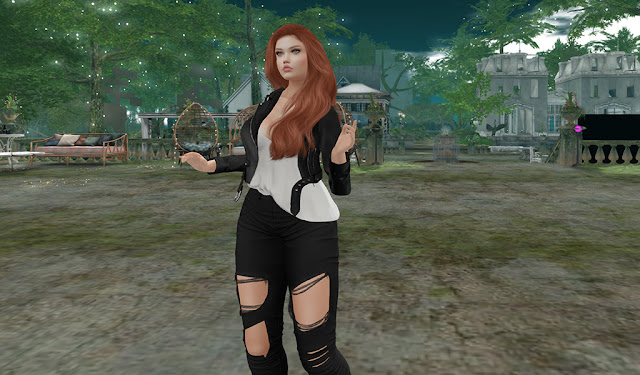 My wonderful friend Diana, for whom I had to relearn one of my own songs (and did so gladly). Photo by Kat.

But Diana reached out to me over the weekend to confirm I was doing a show on Monday evening (I was), and then to find out if, for her birthday (a real life birthday, as opposed to a Second Life rezday), I would do an original song that she had always enjoyed. It was "Shine", a song that I'd recorded for my second solo album in 2010 that was never completed or released. Well, I hadn't done "Shine" in at least five years, and perhaps even longer. It's a fine song; it's just that it has this lyrical theme of total positivity, and perhaps things haven't been all that peachy-keen in recent years in a way that would make me want to reach for that tune. I was glad to pull out "Shine" for Diana. 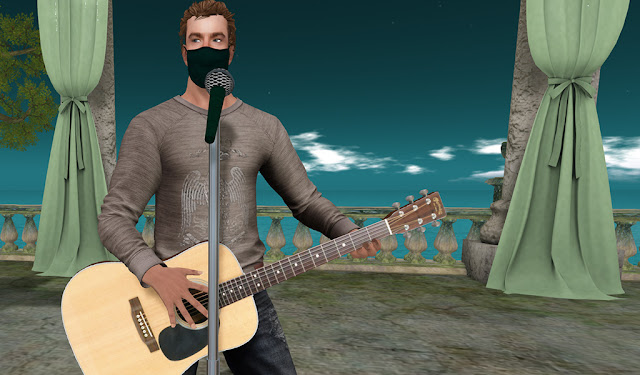 I remain masked in SL, and will stay that way until I feel good about being out in public among people in real life. Photo by Kat.

More Show
I was a little distressed upon arriving at Serenity Gardens to see that Grace McDunnough, who usually has the slot before mine, wasn't able to do her show. That made me, as I like to call it, the sacrificial lamb of the night... the first performer up, starting with literally no one at the venue and having to build the crowd on my own. Well, as usual, I needn't have worried. We drew a nice little audience and everyone seemed to be having a good time. 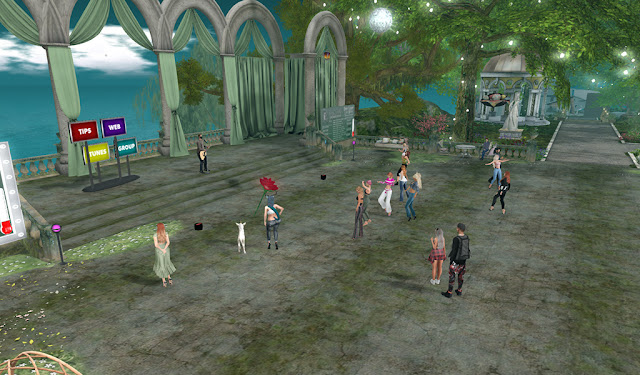 A cool little crowd, enjoying another evening at Serenity Gardens. Photo by Kat. 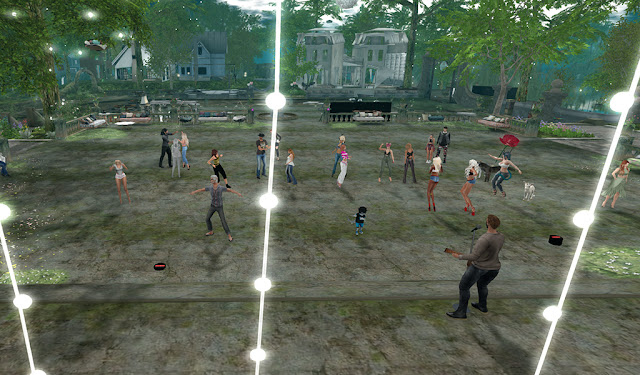 Rocking the people of SL, something I've done for nearly 14 years now. Photo by Kat.

In addition to "Shine", I pulled out a couple of other rarities, like my slow and sad version of Nirvana's "Smells Like Teen Spirit", and Queen's slightly rockabilly tune "Crazy Little Thing Called Love". Overall, the whole set went fine. Also, it miraculously cooled off here in the afternoon after several days in high heat and humidity, and I was super happy when I wrapped up the show to walk outside into a nice ocean breeze and cooler temps.

Big thanks to every single person who came out for the Zak Show at Serenity gardens, with special super thanks to the following people who helped support the show!
AaronCabottJones Resident, Trouble Streeter, Kat Chauveau, Diana Renoir, Kat Claxton, JolieBell Resident, Medea Frostbite, Nina Brandenburg, my excellent manager Maali Beck, and the fabulous team at Serenity Gardens, Tilly Rose and Ilsa Wilde!