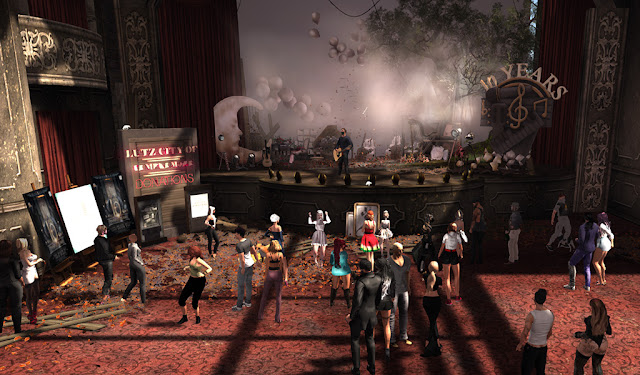 There's never been a more visually fascinating place for live music in Second Life compared to Templemore. Photo by Kat.

Fact: For the first time in many, many years, I've finished a live show in Second Life and I do not, repeat, do not have another show on my schedule. Like, at all. Nothing. Nada. For all I know, that may have been the last show I will ever play.

I am relatively sure this is not true, and that more likely than not, I will be adding some shows to my SL performance schedule in the near future. But at this very moment, my calendar is tabula rasa... a vast expanse of nothingness as it unfurls through the infinite reaches of time. In any case, were my show on Saturday as part of the two-day 10th anniversary celebration of Templemore the last one I ever did, I'd have to admit that I went out on a high note. 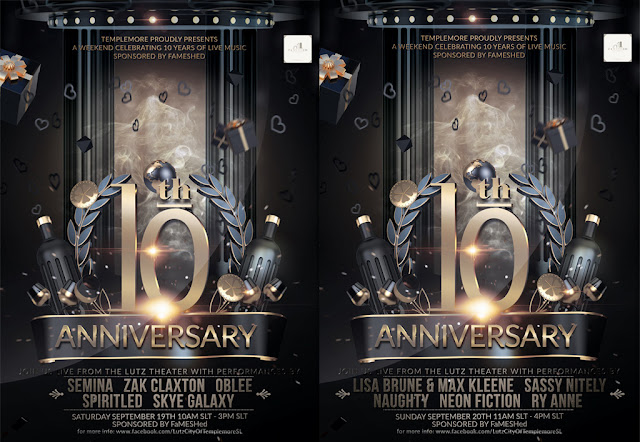 The posters promoting the two-day 10th anniversary events at Templemore. As you can see, some of the best performers in SL are included here... no surprise considering that Templemore regularly features many of SL's most talented and popular live musicians.

Before I Forget
There are a lot of things going on in the world right now. The passing of Ruth Bader Ginsburg, the earthquake that awoke me on Friday night, the lifestyle changes I'm dealing with as a result of a recent medical situation, my next door neighbor with COVID, the total insanity as we move closer and closer to the 2020 election... and I'm not going to talk about any of that right now. I will eventually. Just not here or now. I'm just gonna focus on something positive for the moment, which is the show I just did.

A Few Words on Templemore
Literally dozens of times, I've written about the wonder that is Templemore, a Second Life environment that is comprised of perhaps the most beautiful and awe-inspiring designs in the entire virtual world platform. At a bunch of different venue builds, I believe I've played at Templemore more often than any other location where I didn't have a regularly-scheduled show. If you feel like it, you can read about some of the Templemore shows over the years, from my first one on February 2014 where I recall being astonished at the detail level of the design, to subsequent shows like this one in 2015 where I began to really appreciate the level of genius in how Luis Lockjaw was innovating the look of virtual worlds beyond anyone else I knew. Luis has become a true friend over the years... someone who I can appreciate on a basic human level as well as the respect I have for his tremendous, awe-inspiring creativity. 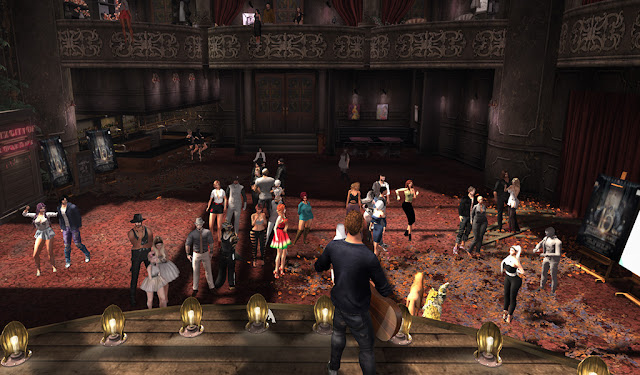 My view from the Templemore stage. Photo by Kat.

I never know when I'm going to be playing at Templemore next, which makes it a sweet surprise each time my manager Maali Beck, or occasionally Luis himself, lets me know that there's an upcoming event there with my name on the marquee. It's funny because I really never feel like one of the cool kids in SL, and trust me, most of the people who perform at or attend shows at Templemore in its various iterations are indeed among the glitterati of Second Life; fashion designers and bloggers and models and whoever else passes for celebrities in the virtual world.

Why Me?
I think the factor that keeps Luis bringing me back there over and over is that the songs I choose to do there are those that would represent a proper soundtrack to the vibe of Templemore in general. There's no single specific musical theme or genre or style I choose for Templemore. I try and do songs there that impart some emotional vibe, and what I'm feeling at the moment influences my set list choices as much as anything. But I try and do songs that impart some feelings, as if Templemore was a movie set and I was there to do a live soundtrack. I think Luis and Whata and Bee and the other folks who allow me to play there have an awareness that I do make that effort. They get it. 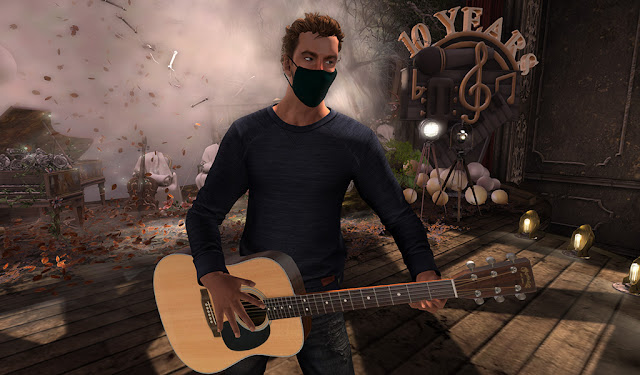 It's probably going to be a long time before SL audiences see me without a mask on... about the same time frame before, say, people in the grocery store see me unmasked. Photo by Kat. 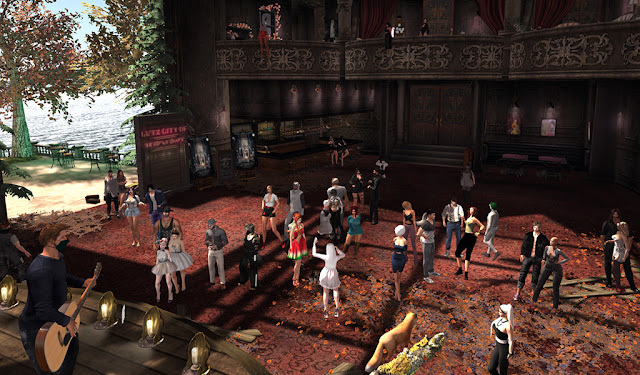 I always feel like the crowd at Templemore shows appreciate what I'm playing there. Photo by Kat. 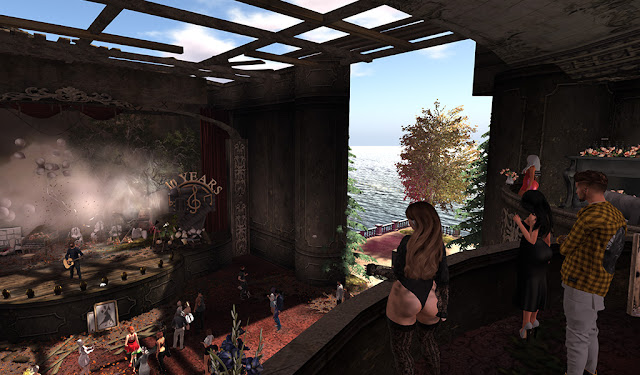 Luis and some of his friends watch the show from the VIP balcony. Photo by Kat.

Templemore Award
As I was about to start my show on Saturday, Luis dropped something in my inventory that I was unable to check out until after my show. When I did, I couldn't believe it; he'd created an award trophy for the 10th anniversary event performers that matched the larger one which was situated on the stage for the event. It has a personalized plaque on it, and I couldn't be happier to be a recipient. I will keep it on display with pride. 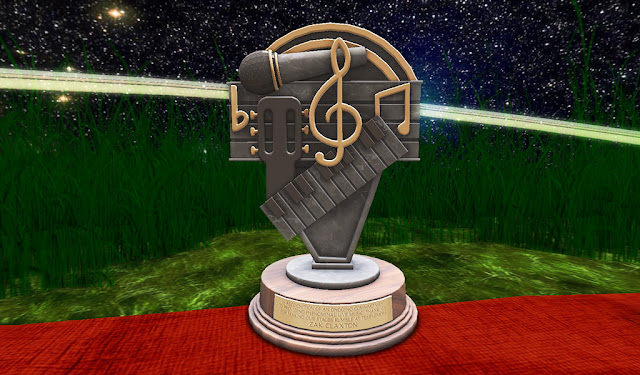 The inscription reads: "In recognition of an ongoing commitment to provide phenomenal live music, thank you for making our stages rumble at Templemore." I absolutely love this. My deepest gratitude to Luis and all the Templemore team!

Wait... Last Show? What's That All About?
Yeah, so... as I mentioned in my previous post, due to economic issues related to the pandemic, Serenity Gardens is taking a hiatus from hosting shows on their big main stage venue where I've performed bi-weekly since Spring 2017. I'm hopeful that perhaps in early 2021, they can get it back in operation and I'll happily return to their stage at the earliest opportunity.

I have very purposefully not been overextending myself in regard to booking SL shows, something my manager Maali has been understanding about over the years we've worked together. My real life is very busy on many levels, and I simply don't have time to do multiple SL shows per week as I once did for years and years. That being said, I do want to get some shows on my schedule at some point, and Maali and I will figure out some appropriate place that would like to have me perform there. No big thing. It'll happen. 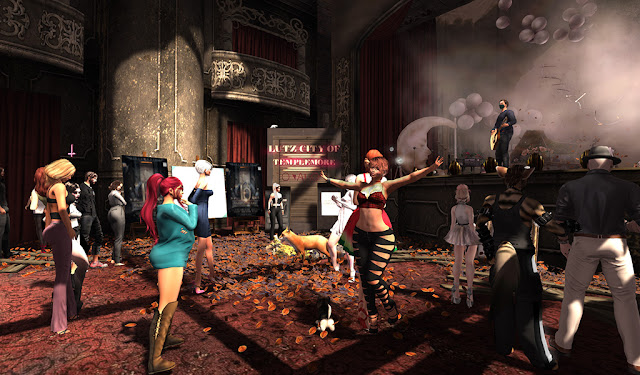 After all these years, Templemore still blows my mind. Photo by Kat.

After I wrapped up my set on Saturday, I did something that I've enjoyed previously following a few of my own performances at Templemore: I hung out to see Oblee play. While I respect the abilities of many SL performers, Oblee is truly enjoyable to me, and his loop-based performance style is great. I've come to enjoy a number of his originals (which, frankly, is all he usually plays), and listening to his show is a great way to settle down and unwind after mine.

Thanks to every single person who hung out for my show at the 10-year Templore anniversary event, with special thanks to the following people who helped support it!