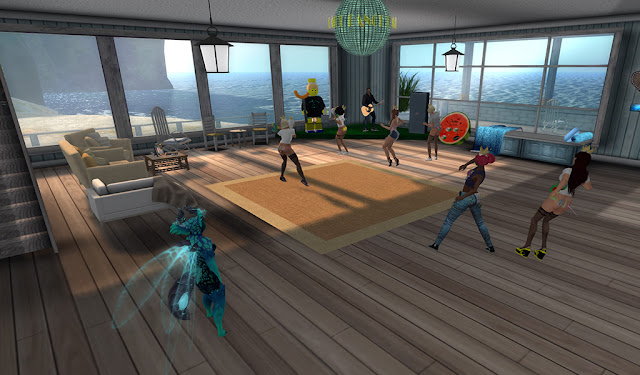 A special event at Triana's Music Trivia to celebrate the life of a friend. Photo by Kat.
Here's a topic I've touched on before that I wish wasn't necessary to bring up... but it is. How important are your "virtual friends" in your life? These are the people whom you only know from some kind of online interaction, which could range from Second Life to Facebook to Twitter to YouTube to any number of multiplayer gaming platforms. People whom perhaps you've never met face to face, and whom you likely never will? And when one of those people passes away, should you feel any less sense of loss just because you never had any physical contact with the person?

I know the answer, because I've unfortunately experienced the loss of a virtual friend on a number of occasions. People whom I've only known as a screen name on a forum, or an avatar in a virtual world, but one with whom I've interacted over the course of years sometimes, and who in every sense of the word has become a close friend. I recall getting to know a woman named Delinda Dyrssen in Second Life back in the 2000s who tragically passed away at age 32 from kidney disease. I recall being every bit as sad at her passing as I'd been on occasions where real life friends and family members had died. There have been too many others from my online experiences, like my pal Dak Lander whom I knew from my music/audio forums. I really knew these people... their likes and dislikes, their family, their history. There are plenty of people -- coworkers, neighbors, and others with whom I interacted in daily life for years -- who I didn't know nearly as well as these folks whom in many cases, I never even had the opportunity to shake their hand or give them a hug.

I started participating in online interaction with people in the mid-90s via platforms like Usenet, so I have some experience in feeling the loss of a person in a purely virtual friendship. Many folks from previous generations to mine ("OK Boomer") simply don't understand this reaction. "But you never even met the person," I've heard said on multiple occasions. But I know what friendship is all about, and it has little to do with being in physical proximity to other humans. It's about finding people who grab your interest, or with whom you feel a connection based on your shared tastes and priorities. It's all the things that make up friendship with those in immediate proximity, but without the limitations of the people who happen to be local to you.

MrNoCal Honey
I am not going to talk about the real name of the man I knew as NoCal because of reasons that may be apparent momentarily. I met him via my participation in Triana's Music Trivia in Second Life, which means I first ran across him in 2006. He was a character in the best sense of the word. He was silly. He was profane. He was also flamboyantly gay, which also made him funny to me. I laughed a lot around NoCal. I'd see him every Sunday evening at TMT for years and years, and over the course of that time, I got to know him pretty well. I became friends with him on Facebook as well, and that's where I got to know more about his real life. He had a lot of admirable qualities, one of which was his difficult choice to sacrifice a good portion of his own life to care for his mother, who was going through increasingly worse dementia. He lived with her in a relatively small town. I always felt somewhat bad for NoCal in that he was a guy who would have loved to break out of the seemingly sheltered environment of his life, but that simply wasn't an option that he allowed himself. 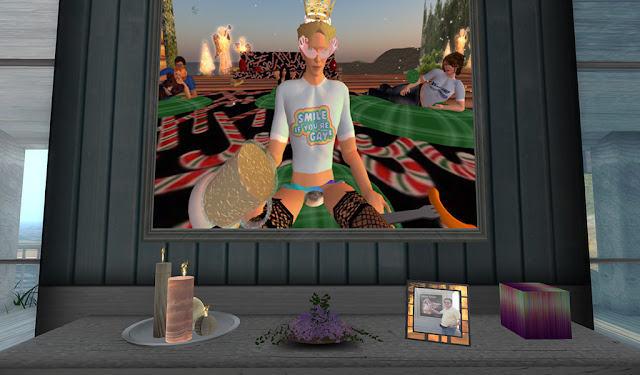 Triana put up a nice little memorial area and slide show for the event. Photo by Kat.
As you might guess from our having met via a music trivia event, NoCal's knowledge of music from many genres was superb. He had done occasional gigs as a DJ, and especially on the pop side of things, he would be one of the constant winning players at TMT. He really seemed to enjoy our times at Trivia, where he could break out of his shell and fully be himself. While most people in Second Life make it a point to change their appearance (or at least their virtual clothing) from time to time, NoCal almost always looked exactly the same, wearing a white "Frankie Say Relax" t-shirt (the one that was popular for about five minutes in real-life 1984), along with a little crown, fishnet stockings, and a rainbow-shaded thong that had a codpiece with a picture of William Shatner.

I'm not positive that all of NoCal's real life friends and family knew this side of him. That's why I am not identifying him by his real name here. I know that I respect people's privacy, and since I'm not completely aware of what his wishes would be in that regard, even after his death I do not want to "out" him to anyone. My only regret in regard to NoCal happened back in March 2012. Kat and I had planned a little vacation to Las Vegas along with our friends from TMT, including Triana, Diana, Xerxes, and NoCal. I got sick shortly before the trip, and a day or two before we were scheduled to leave, I ended up being diagnosed with severe pneumonia. As a result, my one opportunity to hang out with the guy in person never happened. NoCal very rarely travelled... that Vegas trip was the first time in his life he'd gone west of the Mississippi. He'd spent about 30 years working in the same customer service job and living what I'd consider to be a cloistered life, and I really wish I'd been able to see him on that one possible occasion.

As time went by, Second Life started becoming problematic for NoCal's computer -- a not-uncommon occurrence for folks -- and he stopped coming to Trivia on a regular basis. I still kept up with him via Facebook over the past couple of years. The last time we hung out in the virtual realm was when Triana was ending the weekly trivia event, and NoCal managed to make it back into SL one last time, on June 30 of last year. NoCal was his same old self, and I enjoyed that moment a lot. But a couple of weeks ago, I was sitting here and my phone rang and it was Triana, who was crying, and she let me know that NoCal had passed away on January 28. He was 54 years old. It was sad and shocking and everything you'd anticipate feeling from the sudden loss of a friend.

A Salute to a Friend
After the shock had settled in some, Triana and Diana both got in touch with me proposing the idea of having some kind of memorial event for NoCal's friends in Second Life. It had been since last June that Triana had held a trivia event, and she decided to host a special NoCal edition of TMT, and had me play live music afterwards. It was great to see a number of folks there with whom I'd only associated via Trivia, and we all shared our feelings of loss from NoCal's passing. 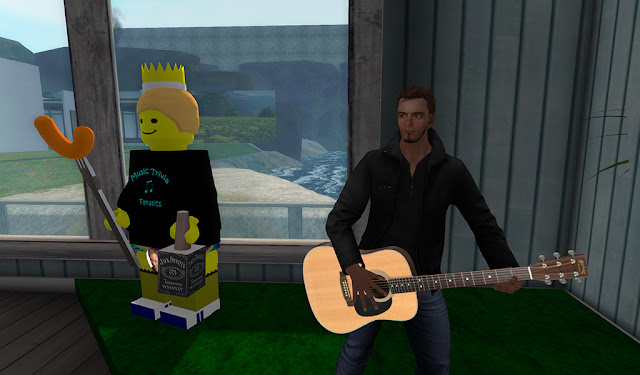 For years, the buzzer to enter the Trivia game was a model of NoCal himself, if that tells you what he meant to us. Photo by Kat. 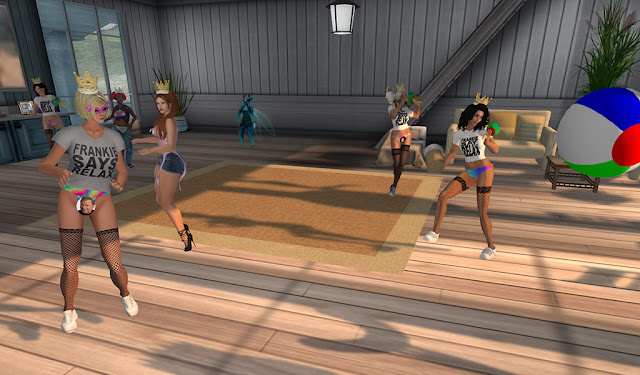 Some of NoCal's close friends, dressed in homage to the man himself. Photo by Kat. 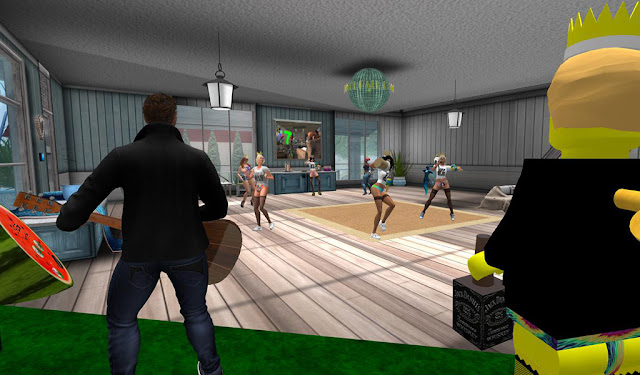 Me, playing music for my fellow friends of NoCal. Photo by Triana.
I chose to do a set of music that mostly included songs that had some kind of meaning to NoCal. These were tunes that I'd done before on the many occasions that I'd done live shows at TMT, and included those I'd done specifically for NoCal's enjoyment. In keeping with NoCal's fun and silly spirit, I didn't limit the tunes to sad and somber stuff, or even overly sentimental songs (though I did include an appropriate number of those as well). NoCal was a guy who loved to laugh, and I very purposefully did some extremely silly stuff, like a bizarre mash-up of my song "Triana" with Boston's "More Than a Feeling" (something that happened by accident while I was warming up, and decided to add to the set that night).

Thanks to all fo NoCal's friends from TMT who came by the memorial event, and who hung out for the show. He was a wonderful guy and we're all lucky to have had the time with him that we did!
Posted by Zak Claxton at 11:16 AM