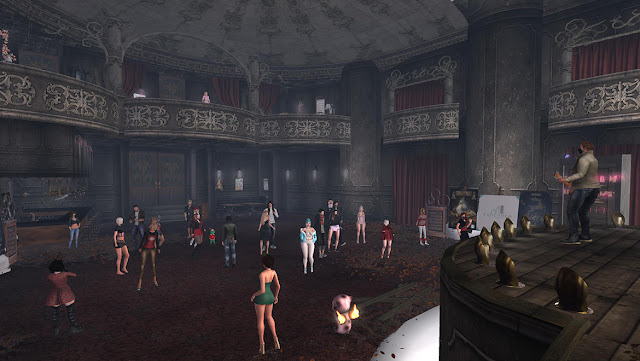 Another great show at Templemore. Photo by Kat.

As I mentioned during my show at Lutz City of Templemore on Saturday, I had a bit of an "oh shit!" moment previous to the gig. I love playing Templemore, and I always prepare a set that I think is complementary to the fantastic vibe of the venue. So, I'd done that, as usual, and was ready to rock it when I happened to see the well-designed promo poster for the show... and noticed that it was specifically a holiday event.

I mean, come on. It's December 12; of course there's going to be a holiday vibe in the air, with Christmas around the corner and Hanukkah already underway. I just hadn't been aware that this particular show was being advertised as such. It certainly wasn't a problem. I've done dozens and dozens of holiday shows over the years. It just meant that I'd have to do a little last-minute re-tooling of my set list to include some of the songs of the season.

Lovely Templemore
I never have enough things to say about Templemore. I've performed there on just about all of its stages and in different incarnations over many years, and every single time I've been blown away by the design of the place. Owners Luis Lockjaw and Grace Sixpence do a wonderful job in featuring many of SL's absolute best and most original performers. Even if I wasn't a musician, Templemore would absolutely be a place I'd want to hang out and see shows. 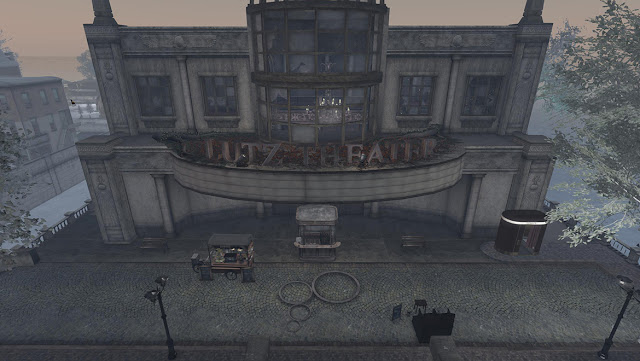 Purely in terms of the detail and overall design of the build, there are few live music spots in Second life that can hold a candle to Templemore. Photo by Kat. 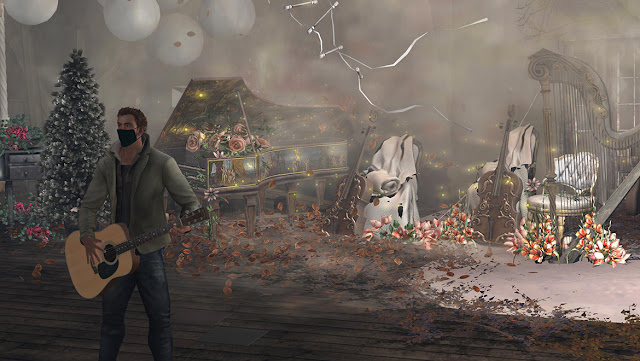 A Linden Visit
I knew ahead of time that I'd have a special guest in the crowd today, though I didn't mention it to anyone. I'd recently been interviewed by Tara Linden for Second Life's "Music Monday" community news feature, and she asked when I had an upcoming show where she could come by and take a picture. Knowing I had Templemore on my schedule, I advised her to stop by and take the pic there. Seriously, where is anyone going to get a better shot of me? So that was cool, and Tara admired the venue and seemed to enjoy herself at the show, which was also cool. The interview will be out on Monday December 14 on the official Second Life site. 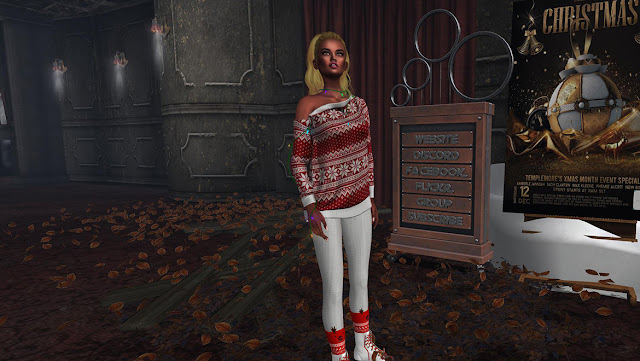 If you're ever out and about in Second Life and see someone with a bright blue name tag, that's a person who works in some capacity for Linden Lab, the makers of SL. This is Tara, who is writing an interview on me for their "Music Monday" community feature. I will say that back in the days or yore, it was a much more common event to see blue-tagged Linden folks popping up at shows. Photo by Kat. 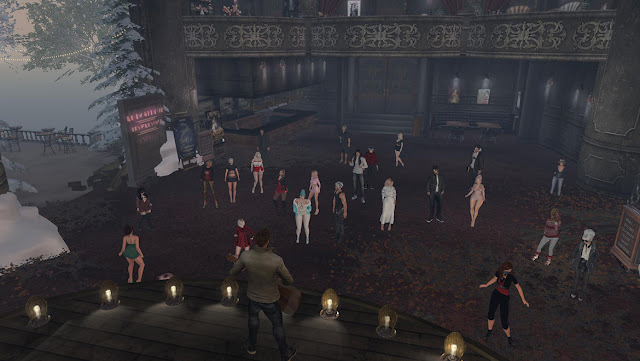 I have to admit... when Tara said she'd like to get a pic of me performing for the interview, I was quite happy that I had a Templemore show booked on my schedule. What live music venue in SL is going to result in a better photograph than this place? Photo by Kat.

We Got a Tree
This has nothing at all to do with my show, but I had committed to getting a Christmas tree today, so not long after I wrapped up at Templemore and lunch was consumed, I hopped in the Jeep with Kat and my adult son, and went down the street to Peter's Garden Center, where we'd picked up our tree each December for years and years. It's a little more expensive there than typical tree lots in the area, but the trees are definitely nicer and I prefer to support local businesses, and they're here in my neighborhood.

So we went down there and... they were literally out of trees. I'm assuming that perhaps due to the pandemic, they may have ordered less of them, or maybe people who've been stuck at home decided to do their holiday decorating even earlier than usual this year. So, back in the Jeep, up the road to the lot on 190th and Anza (a three-minute drive, to be fair), and ended up getting a really healthy fresh tree from there. 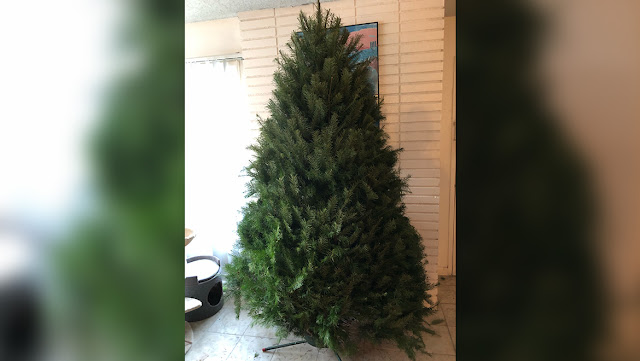 Christmas tree 2020, soon to be decorated.

I should note that while we've all had individual excursions from the house for various necessary tasks, this was our first trip out with the three of us together since last April. I'm serious. So while we were out, we did something that seems completely foreign and strange: we went into our local Starbucks. The place, usually teeming with people on a Saturday afternoon, was completely empty. As we waited for our beverages to be made, alone in a large and quiet store except for a couple of staff members and one other customer, my son remarked that it felt like the Twilight Zone, and I had to agree.

Touch Me I'm Sick
No, I don't have the 'Rona. No worries. I'd picked up a case of bronchitis that plagues me nearly every December, right around this time. It didn't even get to the point of being too bad... just some coughing and wheezing, being worse and more annoying in the evenings. But frankly, having gone down the pneumonia road twice, I just can't be screwing around with gunk building up in my lungs. 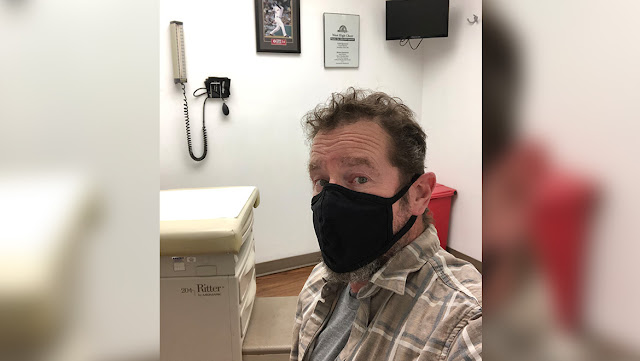 How was your Friday evening? I spent part of mine in an urgent care center in the midst of a COVID-19 spike. Good times.

On Friday, I went to the urgent care place here in Redondo Beach that has been my default primary care doctor for over 20 years, and I went through the too-familiar process of an exam, chest X-ray, and the acquiring of antibiotics. I was actually very impressed at their COVID-19 protocol there, and with the current spike we're experiencing, it's welcomed. I was told to wait in my car when I arrived, and was summoned in when they were ready for me. There were almost no other patients in the facility at the same time as me, and my exam doctor was in an N95 mask, a surgical mask, a face shield and safety glasses. As a result, it felt like it was as safe of an environment as one could possibly expect while seeking medical treatment in the midst of a pandemic.

Anyway, it's just a bit of the old bronchitis, my recurring arch enemy, but I am now bombarding it with water and azithromycin, and I was quite able to sing my show at Templemore with no audible effects of the illness as far as I could tell. I'm treating it now and I will be fine. 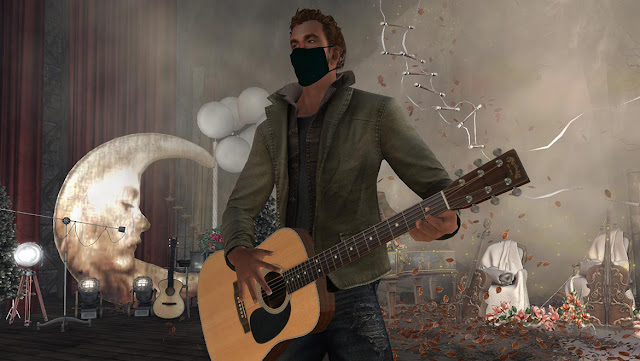 As I've mentioned in every show report for the last nine months or so, I will continue to wear a mask in SL for as long as I do in reality. I don't do this to rain on anyone's virtual parade, but as a reminder to all that wearing a mask is a crucial part of us getting past this pandemic as a society. Photo by Kat.