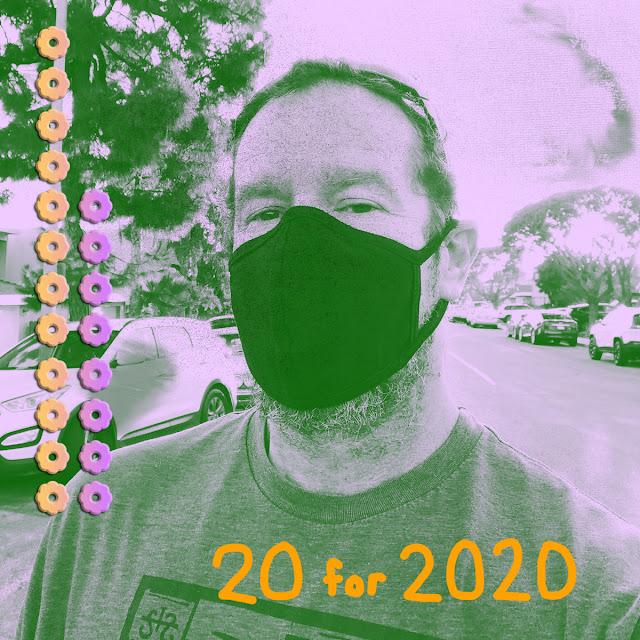 It's that time again... time for you to read some list that some person made. In this case, the person is me, and the list is of songs and/or albums that I happened to notice this year. It's meaningless, and has nothing to do with the popularity of the music, the quality of the music (which I have no idea what that even means), or the style of genre of the music. My sincere advice to anyone who doesn't like this list is to make their own list, and then everyone will be happy. I will say that I do these annual lists focused primarily on indie music because, well, I figure you can find the pop stuff on your own. So let's goooooooo!

I have an oddly specific criteria of music: if I can imagine myself driving up the 62, heading into Yucca Valley on my way to Joshua Tree while listening to it, it's usually something that I can enjoy. This guy is from Austin and seems weird in a good way. Here's his Facebook if you'd like to know him more.

Andy is from Regina (rhymes with vagina), Saskatchewan, and has a terrific mellow sound. This is a song I'd put on during the pandemic while I sit at home and contemplate the fact that I really never liked going out anyway. This whole album is pretty neat, by the way. You can probably hear more stuff at his web site, I suppose.

Bob Dylan ain't exactly indie, amirite? But this song was a nice surprise, and it tells you something that I sat through all 17 minutes of it the very first time I clicked 'play'. He's obviously an icon and will be in the singer-songwriter history books thousands of years in the future, so why not enjoy the man putting out more fascinating music in 2020? Here's Bob's web site, for web purposes.

I may be primarily a guitar fool, but I am also always down for some good chill electronic music. Brothertiger is a New York-based synthwave artist named John Jagos. The coldness of the music is contrasted by the warmth of the vibe. 10/10 would drive through the desert at night with this on. Here's his web site, if you wanna.

Chappaqua Wrestling: "The Rift"
Self Released

Is this music representative of a lot of shoegaze alt-rock that came before it? Yes. Can I name the bands that influenced these guys from listening to just one of their songs? Yes. Does that make me enjoy this any less? No, fuck no. They're out of Brighton, UK, and I can hear that. Here's their Facebook for some reason.

I know almost nothing about Anthony Doud or his music. I know this was a cool song, and that I was surprised by the random sax solo at the end. I'm kind of a fan of sax solos at the end; that's Bowie's fault. This guy seems to be a drummer and multi-instrumentalist. Again, I just liked the song. Here's his Insta if you like that kind of thing.

Ugh, God, this is an amazing song. I listened to it like 10 times when I first heard it, to the point that it made me kind of insane because I'd wake up hearing it for several straight days. It got to be so much that I purposefully didn't listen to it again for several months, but it's still great. Fun fact: she's Canadian. Here's her Bandcamp where you can buy her stuff.

You have no idea how much I loathe the trend of using weird letter combinations to spell bands names in some uniquely phonetic way. Chvrches, Pvris... I won't list them all. So that tells you how absolutely great Hovvdy (yes, they're from Texas and it's pronounced "howdy") does this bedroom pop masterpiece. It's pretty and minimal and definitely represents what I admire in the most recent indie music. Get this on Bandcamp right now, if you so choose.

There are only four chords and they never change... and nor should they. This is fucking great! Totally likable slacker vocals over a killer progression. Keep up with him on Facebook, if you'd like.

I like music with vibe, and that concept of vibe transcends genre. This is dark dance electropop from a London-based duo that's reminiscent of several bands I liked as a young teen in the early '80s. It's got a good beat and some interesting sounds; sometimes that's enough. This song is great. Here's their web site for things and stuff.

JFDR is supposedly an electronic artist, though I hear a ton of organic sounds in her work, so maybe I'm the one who is fooled, or maybe I'm the genius and everyone else is falling for genre compartmentalization. Anyway, she's from Iceland (real name: Jófríður Ákadóttir), and like most people from Iceland, she seems very smart and deep. Her stuff is on Bandcamp if you want it.

Mini Trees: "Want Me To Stay"
Self Released

Mini Trees is Lexi Vega, a lady from here in the LA area. She's an indie bedroom pop artist and her stuff is really great. Picture yourself looking out a window at gloomy skies on a melancholy autumn day while this plays. Get this on her Bandcamp if you'd like to do so.

I'm gonna spaz out for a second and just say this album, Two of Me, was unquestionably my favorite new music of 2020. Like, the whole thing. Call it whatever you want... grunge, shoegaze, alt rock, indie rock, I do not fucking care. I love Momma. I do. Just go get this album on their Bandcamp.

Here's one of the weirdest entries on my annual list ever. This song was written and recorded in 1974, along with an entire album that would eventually be known as Homegrown. And then Neil, being Neil, shelved it and didn't release it until this year. "Vacancy" is now one of my favorite NY songs, and it was damn nice to hear this terrific album right in the midst of the shittiest year ever. Go enjoy the Neil Young Archives.

These are three people out of London making cool, '80s-infused, dark synth dream pop. Very atmospheric and cool. Definitely a "drive fast in the dark on a lonely freeway" thing going here. You can get it on Bandcamp.

I'm not sure what kind of music this is. It's kinda dark and there are guitars and things, so it's no surprise that I like it. The Ophelias describe themselves as a "Cincinnati/New York art rock nature punk moth music" band, and that's totally fine with me. Get this on Bandcamp right now, or whenever.

This is some very nice contemporary art rock. Super clean, very smart sounding indie pop out of Chicago. The song is great but I really love the outro. It sounds like taking the first steps of an adventure. Get it on Bandcamp.

I genuinely know next to almost nothing about this band. I know they are young and from New York City and make grungy, grimy rock that I enjoy based on "Allen Street". Maybe that's all I need to know. Oh, and I like singer Sabrina Fuentes' voice. Buy their song if you want. I did.

A-ha! You thought I was sneaking in an industrial death metal band with blast beats and cookie monster vocals, eh? Nah. Skullcrusher is sweet and lovely ethereal music by an LA-based singer-songwriter named Helen Ballentine. I'm a fan of indie folk and of pretty sounds, and she delivers both. Her stuff is on Bandcamp, you know.

I've casually enjoyed this band since they first started releasing music about ten years ago. I think I like this album Plum the most of any they've done thus far. Kinda dream pop, kinda indie rock, all good. And yes, by all means, get some of that on Bandcamp.