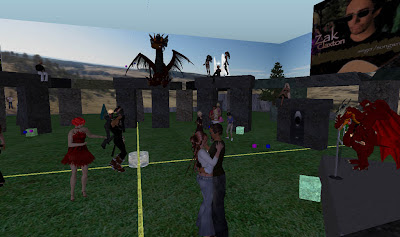 I did NOT have high hopes for either of my two shows today. My lower back has been giving me problems (I spent an hour being twisted and tortured at the chiropractor's office Friday morning), and the very thought of holding a dreadnought acoustic guitar and singing seemed like it would be hell on my poor spine. So, as I arrived at Stonehenge Arena for my 3:00 performance, I told proprietor (and fellow musician) Lyn Carlberg that he should be prepared to jump in and take over my performance if he heard anything resembling a scream and a thud.

Well, I was worried for nothing; if anything, playing today seemed to help my back rather than hurt it. After I tentatively did the first few songs and realized I wasn't in severe pain, I was able to get into the show and had a great time as usual at Stonehenge. Nice folks, decent crowd, and a good time for everyone, I think. I'd also like to thank the Advil I popped like Pez before the show. :)