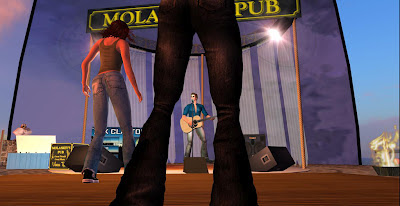 I could be wrong, but I believe that other than places where I've had a regular weekly show, I have played no single venue in Second Life more than Molaskey's Pub over the last 5+ years. And, while this is a subjective call, I seem to have done many of my best shows there as well.

I know the reason why, and I've probably said it before: it's the people. Starting with the Molaskey's owners and staff, and through the folks who seem to pop up at Molaskey's to see shows, everything there helps an artist like me feel comfortable and appreciated. In turn, I am able to feel open to being experimental and improvisational, and all the other things that seem to make some of my shows better than others. 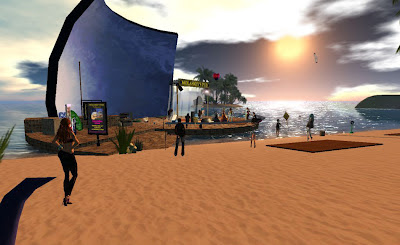 What a pretty place to play live music. Photo by Kat (upper photo by Triana). 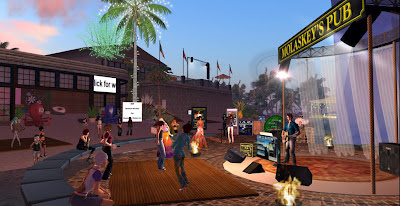 We had a large and lively crowd at Molaskey's, and it's hard to say whether they had more fun than me, or vice-versa. Photo by Triana.

Last night's show was a bit of a surprise, to me as well as my Zaksters. I'm pretty sure that my pal Maximillion Kleene was scheduled for that Monday evening slot, or at least that what it seemed to say in the SL event listings. I didn't ask for the specifics, but apparently Max couldn't make the show, so I was very happy to fill in for one of SL's most popular and entertaining artists. In any case, I didn't find out that I was playing there until that morning. Surprise! There are many venues that I'd turn down in that situation; when I'm not planning to perform, I usually have other stuff on my schedule. But for Molaskey's, I was happy to push that stuff aside and so a fun show.

And fun it was. We ended up with a great crowd, both in terms of size and fun interaction, and despite the whole thing having come together rather quickly, the show itself ended up being pretty damn good.

†It's been over two years since I did a live performance of Joni's "Coyote". It's a great tune that I should probably play more often.