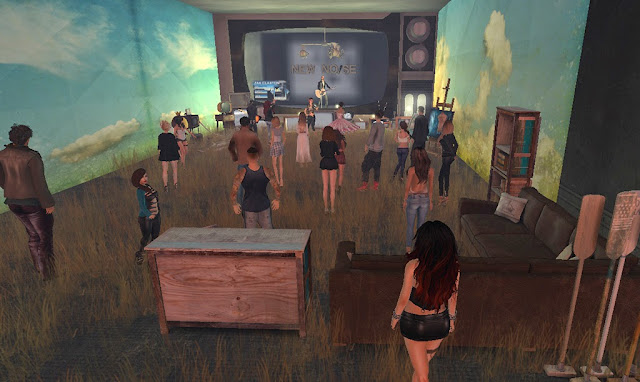 How is Hesperia of Templemore amazing? Let me count the ways. Photo by Kat.
In a moment or two, I'll get to telling you some specifics about my show on Saturday at Hesperia of Templemore in Second Life. But first, I want to dedicate some words to the person who really deserves the credit for making Templemore one of the most amazing places in SL: Luis Lockjaw.

I first performed there a little over a year ago, and have done several shows there since then. But from my very first time there, my mind was boggled by the artistry of the build. It was, to be honest, unlike anything I'd seen before in Second Life. Both Kat and I know a few things about building in SL; Kat even ran a business for about a year as an SL design firm. We've both created stages and venues and so on, but like most people in SL, we built things based on our experiences in the real world. Need a stage? Okay, make a big slab, throw up some lighting and some speakers, plop down a dance floor, and voila... venue accomplished. But that first show at Templemore showed me that an SL stage can be something different. I didn't really know Luis very well at the time, but I knew that whoever was behind the design of this place was a genuine artist who created an entire environment using the tools available in the Second Life platform. It's hard to describe without immersing yourself in it. Suffice it to say that I was enormously impressed.

But then, the next time I played there, I showed up expecting to perform at the same place. I teleported in, and thought I must have used the wrong link... the place looked equally amazing, but completely different. The same thing happened the third time I played Templemore. It was then that I really started to understand that someone was committing incredible amounts of time and attention to detail in making new stage environments all the time. And, it turned out, that "someone" was Luis. 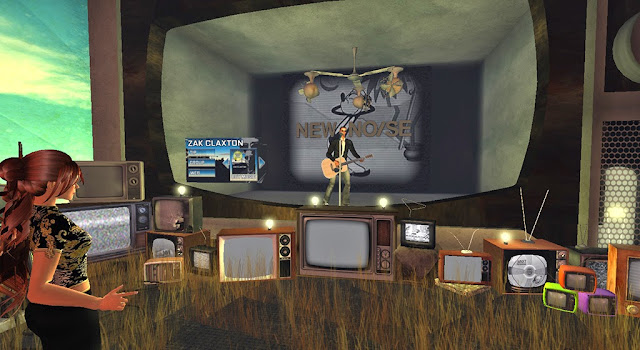 Getting set up to perform inside this incredible television-themed venue. Photo by Kat. 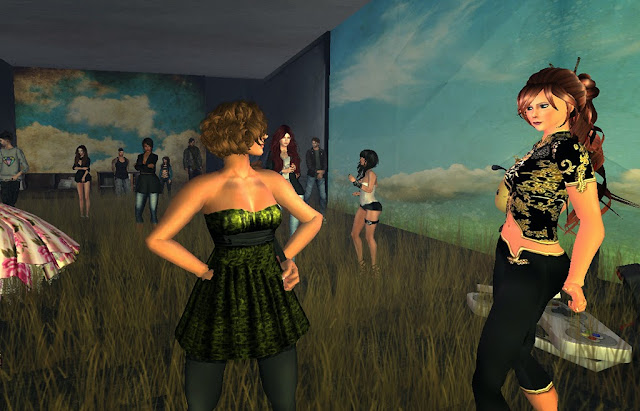 Triana (left) and Kat (right) share a glance while I perform at Hesperia of Templemore on Saturday March 21. Photo by Kat.
I still can't claim to be Luis's best buddy in the world or anything, but I'll tell you what I do know. First off, the guy is extremely nice. I met him in person in May 2014 at the Nashville SL Jam. That's when I found out we're both from Southern California, but despite being only about a 15-20 minute drive from each other, we really live in different worlds. I'm here in an affluent South Bay beach city, while Luis lives in one of the most infamously tough neighborhoods in all of Los Angeles: Compton. I also discovered that in his real life, Luis has a very demanding job: he works for our famous sports/event venue, Staples Center, on the team that prepares the large arena for games by the Lakers, Clippers, L.A. Kings, and huge numbers of concerts and other events that get held there. Just this weekend alone, Luis barely slept while changing over the arena between three different events. I can't even imagine how difficult this must be.

But the main thing I want to say about Luis is that I've seen lots of very cool artistic uses of Second Life, but very few that come close to what he does with the many ever-changing stages at Templemore. Even if they weren't useful places to host musical performances, they'd be some of the prettiest areas on the entire grid. I have huge admiration for Luis's artistry, and I can't thank him enough for pushing the boundaries of what people expect in live music venues in SL. I also know that Luis is involved in the world of SL fashion, something that I have nothing to do with but I admire nonetheless. I'm proud to think of him as a friend. 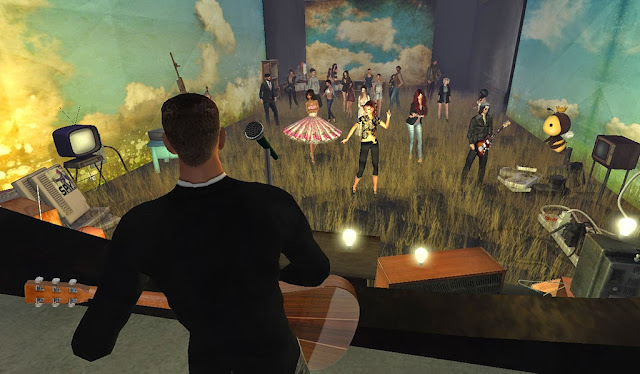 Playing before a cool crowd at Hesperia of Templemore. Photo by Kat. 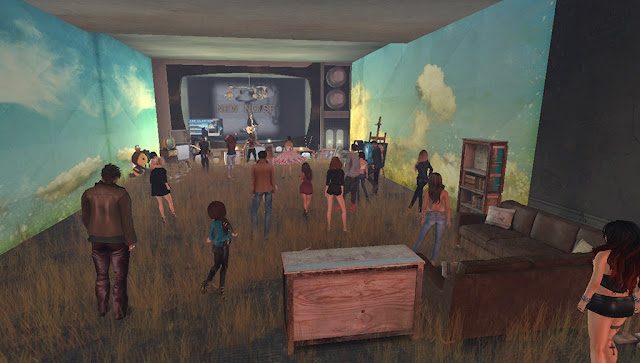 Just look at this place. Have you ever seen a music venue like this? And the most amazing thing is that next time I play at Templemore, it will be yet another brilliant build by Luis. Photo by Kat.
Now onto my show. I've said before that I enjoy doing a relatively early show on Saturdays now and then. Noon is great; it lets me sleep in a bit, then get up, get showered/dressed, have coffee, eat breakfast, and still have plenty of time to get warmed up and ready to play before the show starts. This particular Saturday, I was especially happy, as my love Kat Claxton had just returned from two weeks in Japan on business, and we were very much enjoying getting back to a sense of normalcy in our lives. The show itself went fine; I was mostly over the cold that had plagued me for about a week, and unlike my previous show, managed to sing and play without coughing and sniffling at my audience.

Big thanks to everyone who came out to my Templemore show on Saturday, especially the following who helped support it!
Harry Wheeler, Diana Renoir, Triana Caldera, Ava Weimes, Alexis Fairlady, Sassy Nitely, Ashton Andretti, Kat Claxton, my manager Maali Beck, Templemore hostess Bee Blackrain, and most of all, the amazing Luis Lockjaw!
Posted by Zak Claxton at 9:51 AM