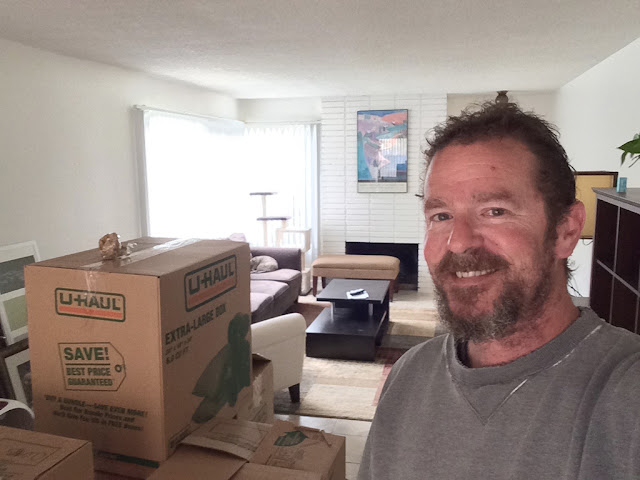 Actually, I had a place to live, and it was fine, sort of. It was a one-bedroom apartment in Torrance, CA, situated on busy Artesia Boulevard, so close to the overpass of the 405 freeway that the smell of exhaust fumes was a regular aspect of my daily existence. If I recall correctly, my rent there was $600 a month. I lived there with my then-wife, whom I'd married in 1993. We didn't have a child. It was, as I said, fine.

But it was a long way from ideal. The building was old, and shit was falling apart. Like, bad stuff. Plumbing was a serious problem. The neighborhood itself wasn't the greatest by a long shot. And I'd been out of college and at my job for several years, and was making pretty good money for a young dude. So, we decided it was time to move. Back in that pre-Internet era, just finding a place for rent was kind of a pain in the ass. I suppose I did what people did then, which was to look through newspapers and such. We checked out a couple of places in Torrance, assuming that a) we couldn't afford anything closer to the ocean and b) anywhere else was going to be an even worse situation.

But then one day, as we were driving around on our way somewhere, I took a left onto Beryl Street from 190th, and saw a big "FOR RENT" sign on a front lawn. I assumed that there was no way we could afford living in this nice neighborhood, but since we didn't have anything to lose, we stopped by to check it out. The place seemed unimaginably huge compared to where we'd been living. I was surprised to find out that the rent was $895... something that was within our range at the time. There were rental applications sitting on the counter, so we filled one out and left. I saw that other apps had been submitted, and didn't have high hopes about getting the place. But the next day, my phone rang, and an older man with a heavy Asian accent was asking me when I wanted to move in.

His name was Sherman Yu, and I told him that we could move any time. I met him back at the apartment, handed over a check to cover our first month's rent and a deposit before he could change his mind, and -- still in some degree of disbelief -- went back to start packing our small number of possessions. We moved into our place on Beryl Street the following month, in August 1995.

Two Decades Later...
It's been almost 21 years since that day, and you could say a lot has happened. In 1999, my son was born. The following year, I got laid off the only job I'd had since college (panic!), only to get a new and better job a couple of weeks later (whew!). That job lasted a few years, which kind of coincided with my marriage eroding. In 2003, I started my own marketing services company which I still run today. That same year, I first made the acquaintance of a lady named Christina who would eventually have a significant impact on my life, and whom I started seeing romantically a couple of years later. In 2008, the larger, two-story front unit opened up in the same building, and I jumped on it. Christina moved down here that September, living just a half block away for the subsequent 7-1/2 years.

We had always intended on sharing a place to live, but there was no specific deadline to do so. I'd had a vague idea that we would move ahead with that plan in 2018, after my son graduated from high school. However, sometimes opportunity knocks, and you should be ready to answer the door. Around the start of May, we found out that a home here in our neighborhood was becoming available. It was pretty much perfect for our needs... two-story, four bedroom, two-car attached garage, nice large patio. Big open living room/dining room area. Completely renovated interior. We didn't have to think much about it; we put in an application right away. A couple of days later, we found out that we got the place.

Since that moment, life went into a whirlwind as the process of moving began. I won't bore you with those details... moving is as shitty as anything that most humans go through multiple times in their lives. And frankly, we're still not done with that process; there is still a lot of cleanup work and collection of random crap that remains in my old place. But as of today -- June 2, 2016 -- I am writing from my office in my lovely new home. And lovely it is. A huge improvement from our former places. And, of course, I am finally living with Christina, which is something we've both wanted for a long, long time.

So here I am, trying to get our new place put together while sorting through a sea of boxes, and at the same time trying to get work done so I can earn enough money to live in this large and lovely home. But I'm not worried. Everything is coming together very nicely. Life is short, and the living quality improvement more than makes up for the temporary pain in the ass of this big transition.
Posted by Zak Claxton at 9:52 AM