Did this year suck? Yeah, but not all of it... and it could have been way, way worse, I promise.
Yeah, yeah, I know... 2016 was the worst year ever, right? Look, I don't blame you for feeling this way. A bunch of your favorite musicians and actors passed away unexpectedly. A bunch of terrible disasters happened. And after a super contentious political season that pitted friends and families and neighbors against each other, the United States elected some guy who conceivably might cause the end of human existence. I get it; it was pretty awful, and it seems like the future doesn't provide much hope of getting better any time soon.

I'm not here to tell you that 2016 was actually good, or that you're all mistaken in your feelings and perception of a year that seemed to be more brutal on many fronts than most others were. But I am writing today to tell you that good and bad is always a matter of scale, and your own experiences and backgrounds have a huge effect on how you perceive any period of time. So, I'm going to give you some short examples of really positive things that happened to me in 2016, and perhaps you've had some similar aspects in your own life over the last year that's drawing, thankfully, to a close.

I Stayed Healthy (and so did Most of my Family and Friends)
There's a reason this is on top of my list; it's by far and above the most important. Nothing else that happens -- good, bad, or otherwise -- matters in relation to our health. I've had previous years where I battled all number of ailments, from influenza and pneumonia to mental health issues to physical injuries. I'm happy to say that 2016 was one of my best years in recent memory in that regard. Some of it is probably due to my just taking care of myself better and better... I exercise daily and my eating habits are healthier than I'd had before (though I still have plenty of room to get better in both areas). Perhaps more important is that most of the people who are closest to me also stayed pretty healthy in 2016. I've had other years where that wasn't the case, and any year that no people close to me died or got seriously ill is something to be thankful for. 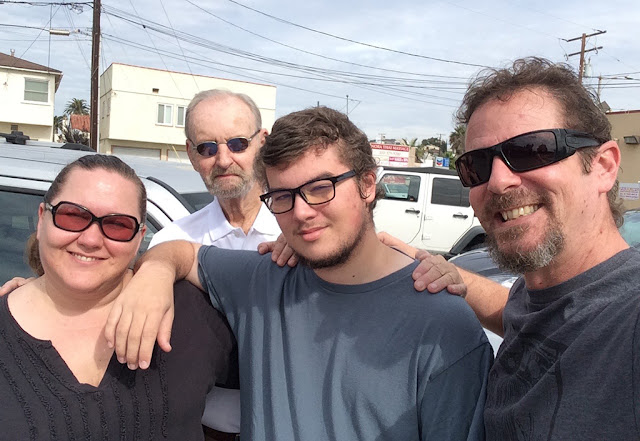 If you made it through 2016 with most of your friends and family alive and in good health, consider yourself a very fortunate person, as I do.
My Band Released our Debut Album
Think about it; while it took four years from conception to realization, it was really just 2015 and 2016 when a huge portion of the work that went into the making of They Stole My Crayon happened. And of course, in August, we were able to finally release the album to the public, which turned out to be an experience way above and beyond my meager expectations. NO matter how bad 2016 seems in retrospect, it was a landmark year for me and my band from a musical perspective. 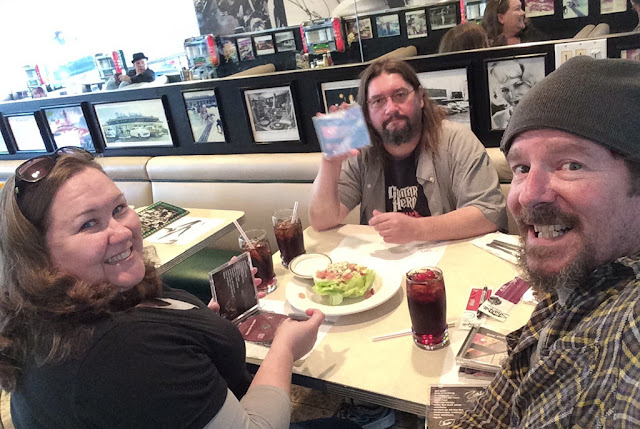 They Stole My Crayon signing CDs at Mel's Drive-In. We worked for four years on our album that came out this summer. 2016 will be remembered for finally getting the album out and being very proud of what we'd done.
I Moved Into a Nice New Home with a Lovely Lady
Some people know that Kat and I met in 2003, became a couple in 2005, and that she moved to Southern California to be with me in 2008. But many of you assumed that she and I were living in the same home in the time since. Not so! Kat and I lived a half block away from each other for the subsequent eight years. This was a purposeful decision on both of our behalf, with good reasons behind it. But last spring, we found out that a perfect place was opening here in the same neighborhood where I've lived since 1995. At the end of May, we went through the hideous process of moving -- which I hopefully will never do again -- and ended up in this really nice 4-bedroom home where we may stay until we're ancient (since, as I mentioned, moving is simply the worst). We're happy here and appreciate being under the same roof all the more, given the time we spent residing apart. 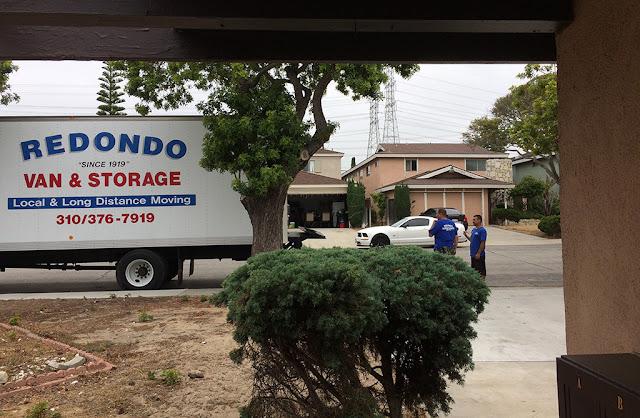 You'd think moving would be less of a pain in the ass with movers doing a lot of the work. No, it's still a giant pain in the ass. But all of the work was well worth it, culminating in Kat and I finally co-habitating after many years of living separately.
A Lot of Musicians Stayed Alive
Not just the young ones either. While none of these people have physical immortality and will eventually pass on, we're wrapping up 2016 with a lot of greats still around, and many still making great music. To name a few who 2016 didn't get... Neil Young, Joni Mitchell, Paul McCartney, Pete Townshend, Mick Jagger, Keith Richards, Bob Dylan, Steven Stills, David Crosby, Jimmy Page, Robert Plant, Roger Waters, David Gilmour, and many more will presumably get past the New Year's Eve celebration alive and presumably well. I'm thankful for that. Side note: just because 2016 is ending doesn't mean that these folks will be immune from death in subsequent years. But let's at least be happy they made it this far.

All the great musicians died in 2016? I think not.
I Don't Live in Extreme Poverty or in a War Torn Area
Listen... I have plenty of friends who live paycheck to paycheck, and who squeak by each month after being saddled with medical bills, debt, and more. Few people I am personally close to have an easy, affluent life. But none of them live in areas where 10-person families huddle in one-room, dirt-floored hovels, or where each day could be interrupted by exploding bombs and drone attacks. Where there's no accessible drinking water, or working waste disposal. Where disease is rampant and untreatable. The fact is that even many of us who think we have it bad are doing pretty damn well compared to a good chunk of the planet's population. I don't take that for granted... ever. 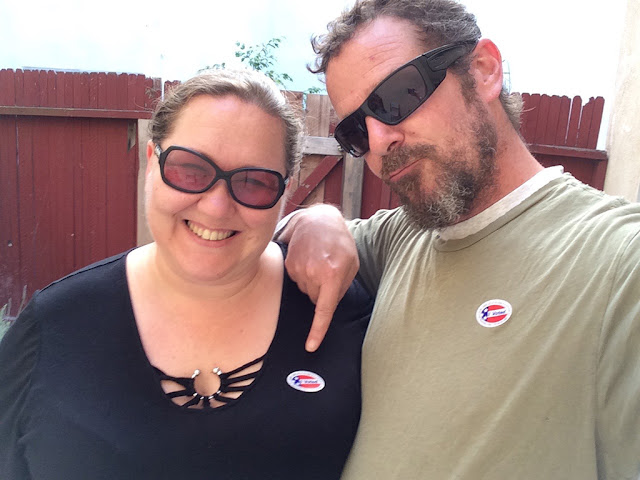 The candidates I voted for in the primaries and the general election both lost. But I did get to vote, and I do live in a really nice place, and have a life that is more comfortable and filled with opportunity than most others living today or at any time in the past. Be aware of those things before you start thinking about how bad your life is.
I Went to Minnesota
Yeah, that's right. In September, one of my best friends in the world, Jess Smith, was a host of the Second Life Twin Cities Jam. Kat and I went. Side note: Jess had visited us here in Southern California like 50 times over the last eight years or so (I'm only exaggerating slightly), and had we not gone to see her in her hometown, she'd probably disown us both as crappy friends (and she'd be right). But we made the trip, and had a great time. While Minneapolis isn't known for being a great vacation destination, the weather in September was lovely and the people there were nice, and I spent a few days jamming with many of the friends I've met through the SL music scene, which is always a good time. 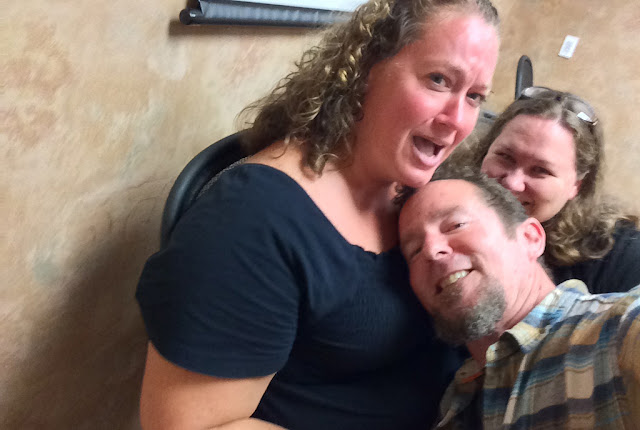 Okay, it's true... I mostly went to Minnesota to put my head on Jess's boobs.
The Cubs Won the World Series
Not that I really give a shit -- my connection to Chicago is tenuous at best, having lived in Evanston for a year or so when I was a toddler, and I'm a Dodger fan through and through. But you have to figure, if a team that last won a championship 108 years ago makes it back to the top, then anything can happen. Like Donald Trump being elected president. Perhaps I should have left this one off.
Posted by Zak Claxton at 8:07 AM