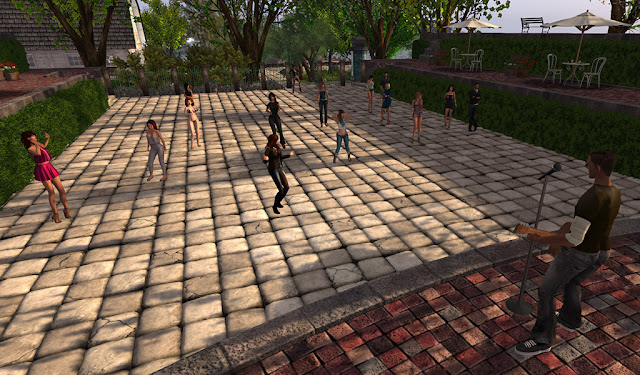 On a day that the moon ate the sun, I was happy to spend my evening rocking The Islands of New England in Second Life. Photo by Kat.
I've been feeling really good about my song choices for my live music shows in Second Life recently. I've found that the more thought I put into set lists and the more adventurous I'm willing to be with adding new songs and pushing myself a little harder, the more I personally enjoy each show, and the more compliments I get from people who are cool enough to attend them. I guess the idea to take away from this is that "phoning it in" is never the better solution.

I certainly don't, however, feel an obligation to put together a specific musical theme for each and every show. That kind of thing starts to get contrived after a short while, and I don't want my shows to become some kind of "guess the theme" trivia game. It's also a limiting factor in terms of what I might feel like playing for any given show. However, as I sat there last week pondering what I might play on Monday August 21 at The Islands of New England, it dawned on me that a certain large celestial event was happening that same day, and it became all too clear that a theme about the sun, the moon, and eclipses would be too good an opportunity to pass up. The majority of my songs contained references to those topics, and people seemed to dig it. I definitely did. 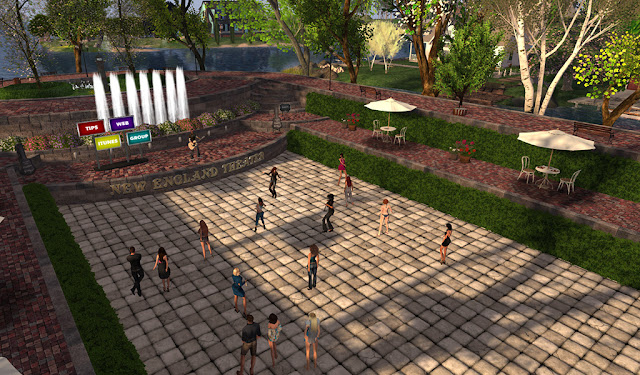 I don't think I've ever had a bad show at New England. It's all about the people who run it and the crowds who attend shows there. Photo by Kat.
When Politics and Music Collide
Let me chat a moment about something that isn't ordinarily an aspect of my performance: politics.

There are many reasons why I consciously avoid political content in my shows. It's very simple. First, people get inundated with it from all directions, and perhaps they'd like a break from it when they come see me play. Second, I really don't want to make people feel uncomfortable... they've taken time from their day to come see/hear me, and frankly I try my hardest to not allow differences in political opinion be a dividing point between people who otherwise seem good and decent. Despite my liberal/progressive stance, you'll see a good number of conservative folks on my list of friends, and I want it that way. I don't want to surround myself exclusively with people who think like me; that's the definition of "living in a bubble", and it does no one good.

In any case, that's why the grand majority of the songs I do, both originals and covers, are completely devoid of political outlook (with a few exceptions), and why I don't spend any time talking about political events between songs. However, the one topic I never shy away from tackling is racism. I have no patience or understanding toward racists and bigots, and frankly, if I have a member of my audience who is insulted by songs that speak out against racism, they should seriously consider finding another artist to enjoy. 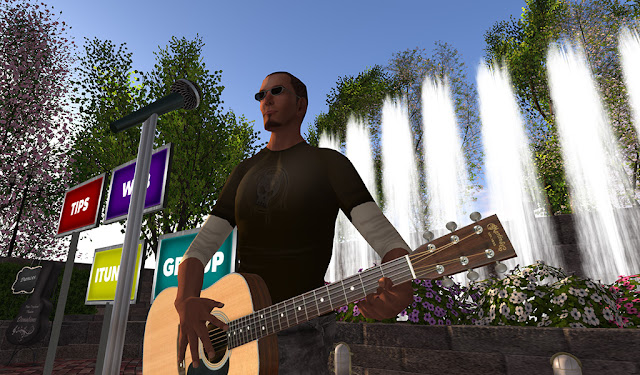 You won't get slammed with political talk or tunes at my shows, but when I have the opportunity to use my stage to help in the fight against racism, I will always make my opinion clear no matter who is listening. Photo by Kat.
On Monday August 14, Wilco unexpectedly released a new song called "All Lives, You Say?" which you can hear and purchase below. The band's frontman and creative leader Jeff Tweedy is a musician who I've always admired on multiple levels. His dad, Robert L. Tweedy, passed away earlier this month, and the song is dedicated to his memory. Jeff said in the song's description, "My dad was named after a Civil War general, and he voted for Barack Obama twice. He used to say 'If you know better, you can do better.' America - we know better. We can do better." I have to assume that the song was a direct response to the violent clashes in Charlottesville, VA over the previous weekend, where the reprehensible actions of alt-right white nationalists resulted in the death of Heather Heyer, and marked a possible turning point in how this country views and deals with racists. The short and simple but vibey song is a slapback to the "all lives matter" response toward the "Black Lives Matter" movement.

As of this morning, in a week since it was released, it raised $26,879 for the Southern Poverty Law Center. It did so well that continuing purchases of the song are now going to another worthy cause, Life After Hate. For me, as a live musician who loves Wilco and is always on the lookout for new music to perform, it was a no-brainer to cover it at the next available opportunity, which was last night at New England. It's available via my favorite music platform Bandcamp, and costs a buck (though you're welcome to pay more if you want). Check it out.


The Islands of New England set list...
Hand In My Pocket (Alanis Morissette)
Never Run Away (Kurt Vile)
Falling Down (Zak Claxton)
You’re So Vain (Carly Simon)
Pink Moon (Nick Drake)
Things Behind the Sun (Nick Drake)
*Waiting for the Sun (The Doors)
Here Comes the Sun (Beatles)
Box by the Cliff (They Stole My Crayon)
Birds (Neil Young)
*All Lives, You Say? (Wilco)
Blew the Dust Away (They Stole My Crayon)
Brain Damage/Eclipse (Pink Floyd)

As always, huge thanks to each and every person who came to see me perform at The Islands of New England. Your presence is what counts. Extra special thanks to those who helped support my show.
Christopher135 Quan, Lorelai Bonetto, Aurelie Chenaux, RoxxyyRoller Resident, TheaDee Resident, Kat Claxton, Tyche Szondi, Triana Caldera, Brookelyn Breen, Sommer Shepherd, my lovely manager Maali Beck, and New England's fantastic team of Christine Haiku and RansomTalmidge Resident.
Posted by Zak Claxton at 9:18 AM