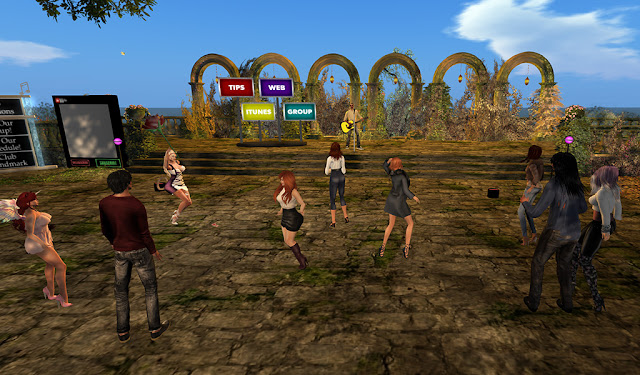 Having a good show at Serenity Gardens before my annual hiatus from SL performances. Photo by Kat.
I awoke yesterday morning with no idea what kind of music I'd be performing at Serenity Gardens in Second Life for my scheduled bi-weekly Monday night show there. A few hours later, my set list was completely clear, due to both happy and sad reasons.

Last Show for Awhile
As I mentioned last week, I'm now officially on hiatus until after an upcoming business event. My next scheduled show is on February 12, so I wanted to make sure last night's show was a good one for the sake of both myself and my audience. There's this kind of weird paranoia among some SL musical performers that if they don't do shows constantly, they'll be forgotten or something. Look at it this way: in real life, bands don't tour 100% of the time. They tour, they work on an album, they have lives, and then they tour again. I actually think it's a good and positive thing to step away from doing shows in SL every so often. In my case, it's a forced but necessary decision, with a business event that eats my time (and then consumes my body and voice to the point where singing and playing just isn't an option for awhile). But each year, I find that my January hiatus works out fine, and leaves me with a renewed interest in doing my shows upon my return.

Martin Luther King Jr. Day
For reasons of the above-mentioned hiatus (which usually starts a bit earlier than it does this year), I don't believe I've ever before done a show on the MLK Day holiday. Once I realized the significance of the day, I wanted to be sure to perform some music that had a theme of Dr. King and the civil rights movement... something that's important to me on multiple levels. Most of the people reading this blog are likely aware that I'm a supporter of causes that promote equality and justice for all people, so I wasn't going to miss the opportunity to spread my message on such an auspicious day.

Dolores O'Riordan, 1971-2018
It was a few hours into the day yesterday that some heartbreaking news starting filling my Twitter and Facebook feeds. Dolores O'Riordan, the singer and main songwriter of The Cranberries, had passed away suddenly at age 46. Beyond being sad on its own, it made me aware that The Cranberries had an unexpectedly big musical impact on the early/mid-90s period. I'd previously only had one song of theirs in my repertoire, but I was well acquainted with many others, and decided to do a few of them in tribute to this good musician and lovely woman.

The Show
I never know what kind of crowd I'll get, or how well I'm going to perform. I really don't. Some days everything feels fine and then my hands and vocal chords decide to not cooperate, and other times the reverse happens where I think I'm unordered or not feeling physically perfect and then have a great show. Well, I'm happy to say that last's night's show at Serenity Gardens went well on all fronts. We had a nice audience who seemed to enjoy themselves, and I felt good about the tunes I did. The show kind of got divided into three parts... a tribute to Dolores, a batch of songs for Dr. King, and a mishmash of indie rock and original tunes. I think they all went pretty well. 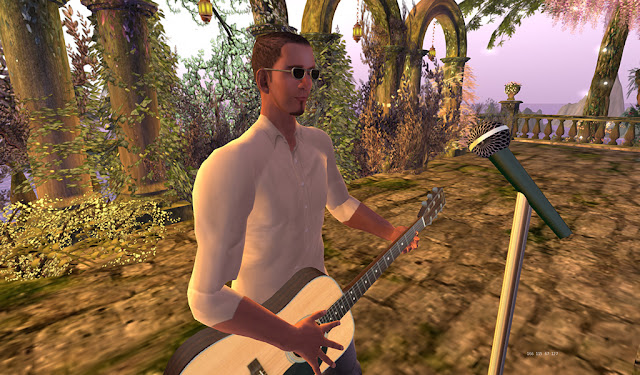 Me onstage, looking out at my friends and fans. Photo by Asimia Heron. 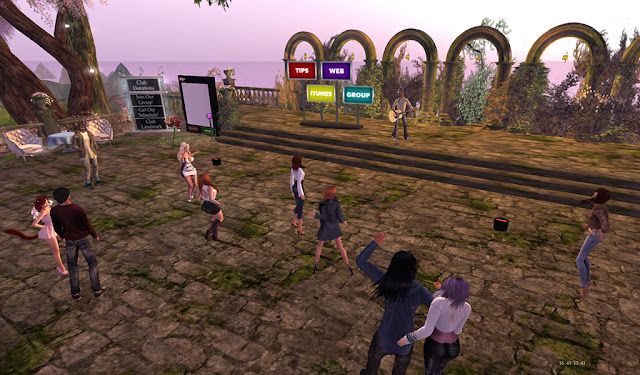 My crowd at Serenity Gardens always seems accepting of whatever I choose to play, which is a good feeling. Photo by Asimia Heron. 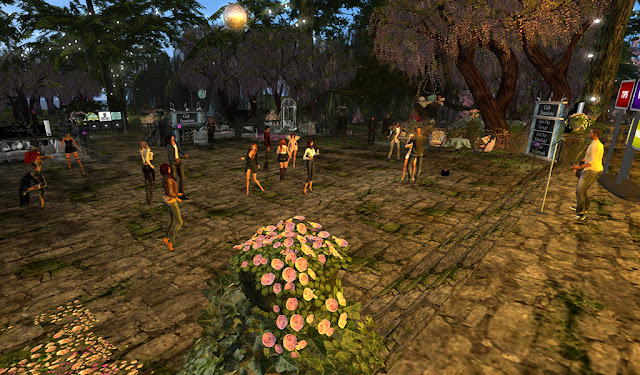 Big ol' thanks to all who came out to my last show before my hiatus, with special kudos to the following who helped support the show!
ErikKottzen Resident, Aurelie Chenaux, Sesh Kamachi, Asimia Heron, go2smoky Resident, Tyche Szondi, Lunette Kyomoon, Kat Claxton, my manager Maali Beck, and the great management team of Serenity Gardens, Tilly Rose and Ilsa Wilde!
Posted by Zak Claxton at 9:17 AM