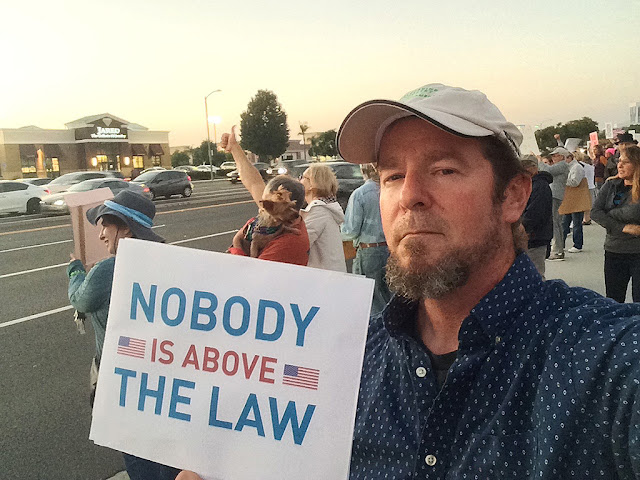 This week has been, in a word, brutal.

Don't get me wrong; the blue wave that drove this year's Midterm Elections was fantastic, and the positive results are still flowing in. But despite the overwhelmingly positive outcome, the stress of leading up to election day and the intensity of following dozens and dozens of local, state, and federal races on Tuesday and throughout the week absolutely took its toll. Add to that yet another mass shooting here in Southern California, immediately followed by massive fires that drove many of my friends and their families from their homes, made it a tough week to get through. I mentioned to someone today that Monday seems like a month ago, and I meant it.

In the midst of all that, on Wednesday November 7, the morning after the elections, the Attorney General Jeff Sessions was forced to resign by the president. It wasn't entirely unexpected; if you've been following along, you were aware that staff changes were going to happen as soon as the Midterms were over. But another aspect of that firing/resignation was that the president put in an acting attorney general named Matt Whitaker. It is still very much in dispute as to whether Whitaker can legally act as AG, but one thing is clear: his conflict of interest places the Robert Mueller investigation of meddling in the 2016 election in jeopardy. 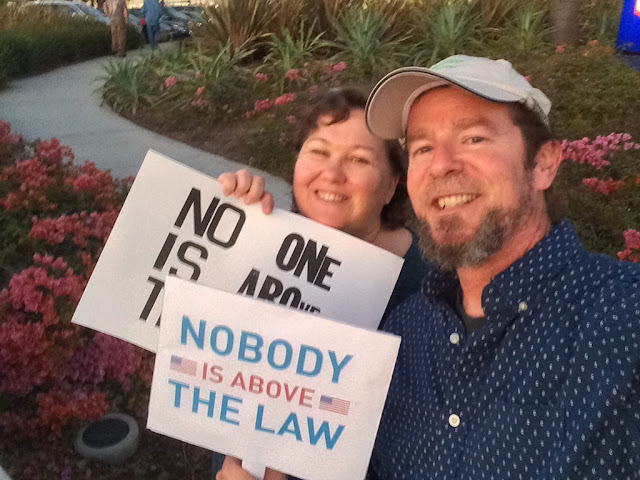 Christina and I feeling good about doing our duty to stand up for what's right.
Fortunately, this specific occasion was one for which we've been prepared for a long time... "we" being members of various action groups across the USA. Christina and I had signed up months ago for alerts in this regard, and now that the occasion to protest had indeed arrived, we were ready to mobilize on the spot. It's really incredible, if you think about it, that thousands and thousands of people in cities across the country would be willing to drop everything they were doing on a random Thursday evening with little notice, and get out into the streets to make our voices heard.

Rachel Maddow covers the nationwide protests on November 8, 2018.
On a side note, I frankly never thought I'd be in a position to be forced to give my support to public protests like the ones we've done in 2018. Last night's #ProtectMueller protest event was the third such one we've involved ourselves in this year, after the March For Our Lives rally in March and the Families Belong Together event in June. Do I think these things make a difference? Yes, and the more I've had direct involvement, the more I see how effective they are. The city of Torrance, where last night's event was held, has a somewhat conservative side compared to many local areas here in Southern California. However, I saw zero counter-protesters, and the number of attendees (over 400) and the cars driving by and honking to chow support both indicated to me that the prevailing feeling we shared was mutual among a good chunk of the community at large.

All we knew by way of instruction was that we'd be gathering on the northwest cover of Hawthorne and Sepulveda, near Del Amo Mall. We could see that there were a lot of people who'd RSVP'ed for the event, which wasn't very surprising; the location was central to residents of Torrance, Redondo Beach, Palos Verdes, and other South Bay cities. But you really never know what kind of turnout an event like this one would get until you get there, and while we arrived a few minutes before the start time of 5PM, there were already over a hundred people set up along Hawthorne Boulevard as we pulled up. The crowd swelled immediately after we got out of the Jeep and joined the action. 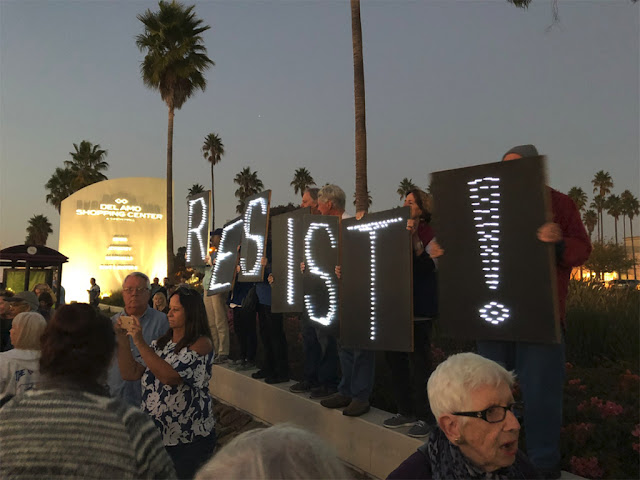 Some of the Indivisible team at the Torrance protest. Photo by Christina. 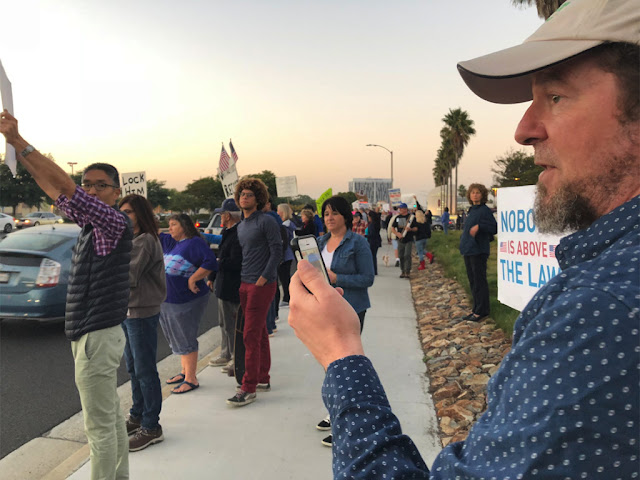 Roughly 400 people came out in our little suburban area at a moment's notice to protest the danger to the Mueller Probe. Photo by Christina.
Was this what I felt like doing at that moment? No. Hell no. I'd greatly prefer living in a world where protest wasn't necessary. I'd have rather spent my Thursday evening after a hellacious week relaxing at home. But am I glad I did it? Yes. Hell yes. And I can promise you that there are many other similar events planned across the US should certain circumstances call for them. I believe the movements against the immoral and often illegal actions of the president and his administration are really only gathering steam at the moment, and no matter where you are, you should count on seeing this kind of thing more and more over the next couple of years, if not longer.

And I'll be there supporting them. Count on that.

Protesters stretched as far as the eye could see along Hawthorne Boulevard. Photo by Twitter user @Betsy_Boyz.
Posted by Zak Claxton at 7:58 PM