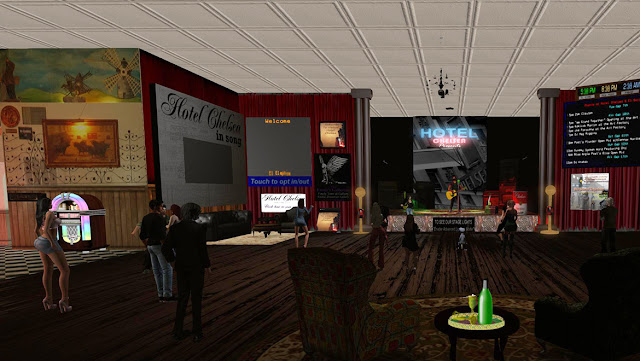 This was a super fun show. I apologize to anyone who took offense to my vulgar display of extraordinary ego in my improvised last song. These things happen. Well, to me, anyway. Photo by Kat.

I ended up having a really pretty fun show at Hotel Chelsea in Second Life last night, but first I want to talk about women. I'm sure you've heard of them. They're people like men, but probably better in most ways.

The Texas Abortion Law
On September 1, one of the most restrictive abortion laws in our nation's history post-Roe v. Wade went into effect in Texas. Senate Bill 8, which was signed into law by Greg Abbott,  bans abortion after six weeks of pregnancy... a point that's well before most women even realize that they are pregnant. But there's more. The law allows private citizens to sue anyone who assists the woman get an abortion, from medical facilities themselves all the way down to a person who helps a woman pay for medical treatment or even gives a woman a ride to a clinic. The icing on this nightmarish cake is that the law purposefully makes no exceptions for cases involving rape or incest.

A Little Background
You, a smart person, may be asking yourself, "Hey self, don't we live in a country where women's reproductive rights are protected constitutionally via a Supreme Court decision?", and the answer would be yes. In 1973, one of the most well-known SCOTUS decisions ever was handed down in a case called Roe v. Wade. Roe was the pseudonym for Norma McCorvey, a young woman who lived in Texas. Wade was Henry Wade, the district attorney of Dallas County, TX. The court's decision by 7-2 was that abortion fell under the 14th Amendment's right to privacy. It has also been said in times since that forcing women to carry and bear children is subjecting them to involuntary servitude, which also violates the anti-slavery rights of the 13th Amendment. 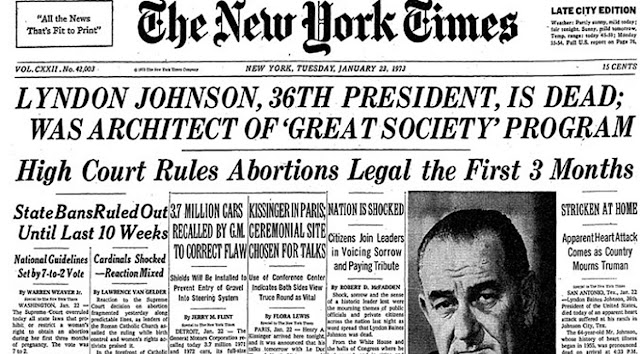 How Can the Texas Law Be Legal, Then?
Great question. On September 1, the Supreme Court in a 5-4 vote refused to block the Texas law from going into effect. However, it's likely that the first time the law is challenged on a direct basis that the court will need to either rule the law as being unconstitutional... or be forced to overturn Roe v. Wade entirely. There's too much conflicting between the two to coexist. Be aware... there's a legitimate concern that this conservative court may do just that, effectively ending safe and legal abortion in this country. 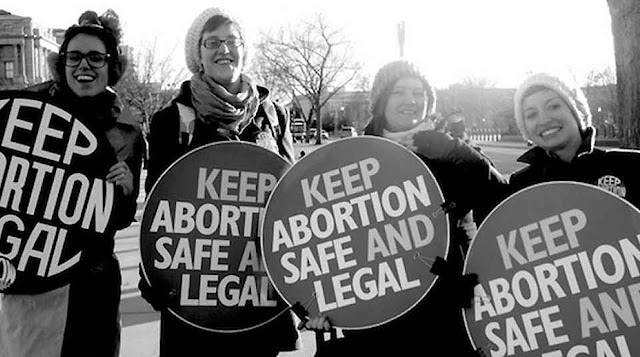 One of the most important things to keep in mind about legal abortion: abortions happen regardless of legal status, and the horror stories of back-alley abortions that lead to the maiming or death of women will become reality again if Roe v. Wade isn't maintained.

Can a Pregnancy Be Determined Within the Six Week Period?
Short answer: no. In almost every case, a woman is not aware she is pregnant within this time frame. I'll let Alexandria Ocasio-Cortez explain it as she did in a recent interview.

“I’m sorry we have to break down biology 101 on national television, but in case no one has informed him (Texas Governor Greg Abbott) before in his life, six weeks pregnant means two weeks late for your period. And two weeks late on your period for any person—any person with a menstrual cycle—can happen if you’re stressed, if your diet changes, or for really no reason at all. So you don’t have six weeks.”

Essentially, this means that the one mechanism the Texas law is using to skirt by Roe v. Wade -- this six-week grace period -- is meaningless. It places the law in direct opposition to the intentions of the constitutional ruling that is the basis of Roe v. Wade. And, said and done, wealthy people will still have access to abortions, legal or otherwise, while the poor will be the ones who are forced to carry unwanted pregnancies to term. 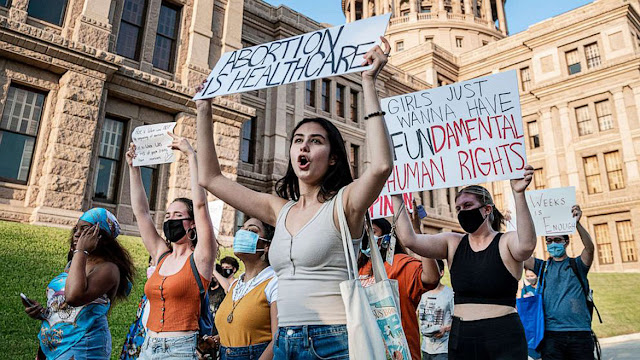 Women's rights are human rights. That's right. Side note: women make up about 52% of the population of the world. Exactly zero men should be telling women how they are allowed to use their bodies.

I'm not going to get into all of the ramifications of forced birth. It's disgusting, and it's just vile that here in 2021, women of our country are still treated like property with a different set of rules than men are required to abide. I'll end this little note by saying that I will do anything I can do in my small way to help prevent this law from remaining in effect, from using my influence on businesses based in Texas to participating in protests to offering aid to individual women who need help. Letting this slide would result in the possible overturn of Roe v. Wade and a massive setback to women's rights. I refuse to allow that to happen. More on this topic at a later date.

Hey, How Was That Show?
It was great despite a few things, and I'll tell you why. First, I didn't have Max Kleene performing before me, which meant I had to start from an audience of zero as opposed to getting some of his leftover crowd to kick off my show. No big thing... folks started coming in as usual as I got rolling, and we ended up with a small but fun crowd. 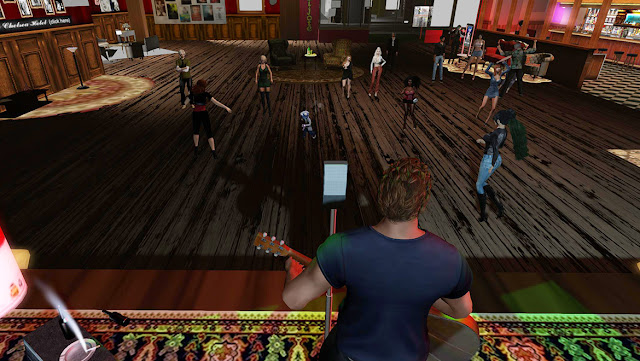 Not a huge crowd, but definitely a fun one. Photo by Kat.

Second, I was about halfway through the show when my voice decided to take a little vacation. I'm not sure why. I will say I haven't been doing many shows lately, nor have I been singing for other purposes. Even though I warmed up plenty, I think it was the equivalent of taking a run after a hiatus from exercise. Singing is a physical activity, and you need to do it pretty consistently for consistent results. 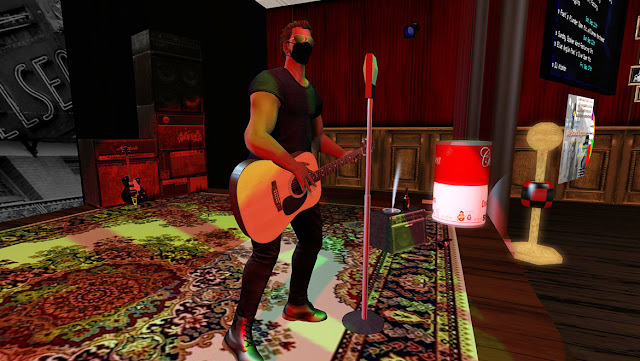 Am I still in a mask in SL? You betcha. I look forward to taking it off; it will symbolically represent the end of the pandemic, whenever that may be. Photo by Kat.

That being said, I was still able to push past the vocal issue and finish the show pretty well. I spent the rest of the evening after the show not being able to make much sound with my vocal cords at all, but today (the following morning), it seems fine.

Another note: this was my first show after the death of Rolling Stones drummer Charlie Watts on August 24. I didn't make the whole show a big tribute in that regard, but I did do a few Stones songs in memory of Charlie, including one I hadn't done before. Some of the other songs in my set were chosen in solidarity with the women of Texas and around the world, for reasons described above.

Final note: as anyone who's been to a bunch of my shows can attest, I sometimes find myself with a small time gap toward the very end of my show where there's not enough time to do a full tune, but it's too far from the top of the hour to just leave. In those cases, I often improvise a little tune on the spot. As with all improvisational art, sometimes what I come up with is good, sometimes it sucks, and sometimes I find myself singing to my audience about having a big dick, as was the case last night. I offer no excuses nor explanations. 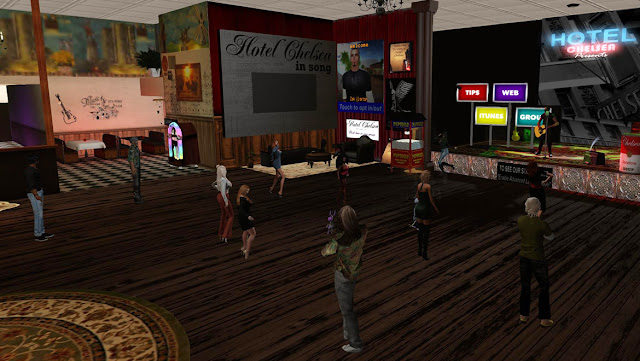 I probably won't be singing the inspirational song "Zak Claxton" again. I couldn't if I tried; I have no idea how it went. But I do recall saying some entirely inappropriate lyrics. My stream of consciousness can be a filthy river, but that's the way it goes. Photo by Kat.

*Indicates the firsat time I've peformed this song in SL.

Huge thanks to everyone who came out to the show, and hella massive thanks to the following who helped support it!
RoseDrop Rust, shelmark Resident, Trouble Streeter , noowun Wind, Nina Brandenburg, vesti Korbitza, LillyAnnSetner Resident, Elaine8000 Resident, DennyMac Melodious, Kat Claxton, my terrific manager Maali Beck, and Hotel Chelsea manager Shyla the Super Gecko!
Posted by Zak Claxton at 10:44 AM