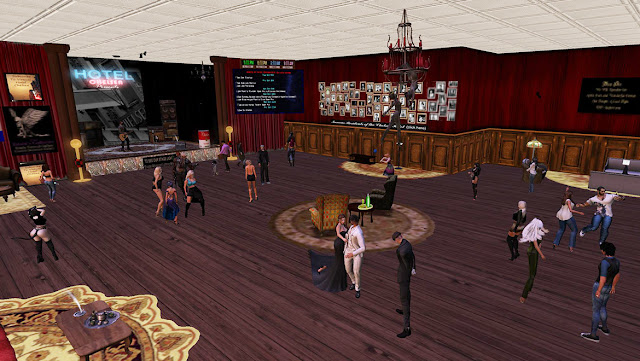 Rocking the alphabet (at least A through M) at Hotel Chelsea. Photo by Kat.
Believe it nor not, it's coming up on one year that the first Tuesday evening of each month, I've been performing at Hotel Chelsea in Second Life. Even though it's only a monthly show (as opposed to a weekly or bi-weekly like most of my previous regularly-scheduled venues in SL), it really has become kind of my home turf these days, where I feel very comfortable and can count on a good crowd and can do fun shows without a lot of effort.
Gratitude to Max Kleene
For most of those shows at Hotel Chelsea, I am following my friend and fellow SL performer Maximillion Kleene. I may have told this story before, but it's worth repeating. When I was really just getting started in the SL music performance scene around 2007/2008, Max did something for me that I'll never forget. He had his own little venue, an outdoor place that was on a beachside with a fire pit in the middle; I don't remember what it was called. But Max had me out to perform there and brought in his considerably large base of fans to check me out. It was tremendously helpful to my little career as an SL musician, and I feel it was the kickoff point to help me cultivate my own fan base.
Since then, I've not only shared stages with him at various gigs across the SL grid on many occasions, but we've also had a great time performing together at a number of live SL jams in places like San Diego, Nashville, Minneapolis/St.Paul, and Orange County, CA. He's a talented guy who knows how to engage his crowd, and is vary capable as a solo artist... not something every musician does well. Max lives in Canada, so it's pretty remarkable that the two of us would have had the opportunity to do live music together despite being so geographically isolated. It's part of the magic of Second Life, and I appreciate it. 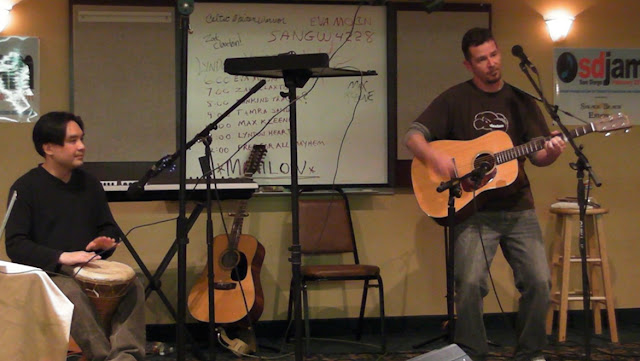 Max and me at our first real life gathering at the San Diego SL Jam in February 2011, over ten years ago. 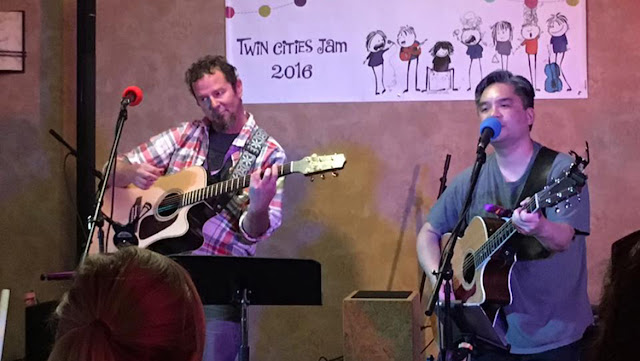 Another time rocking with Max, this time at the SL Jam in the Twin Cities, fall 2016.
What Happened to Facebook/Instagram on Monday?
You know sometimes how you think you know something, but then you have to wonder if what you think you know is just what someone else wants you to think you know? That's kind of where I am with Monday's spectacularly bad fail of the Facebook-owned online entities. Even the part that seems to be acknowledged as the truth is such a bad look for that company, it's amazing it could happen at all.
The long story short is as follows. Someone at Facebook, who has presumably since been taken out back and shot, accidentally (as far as we know) sent a little note to the routing protocols of the Internet that told it their servers were gone. This happens every once in awhile... usually with smaller companies that forget to pay for renewal of their domain name. When it happens, someone says "oops" and pays the bill, and their site is back up a short while later. 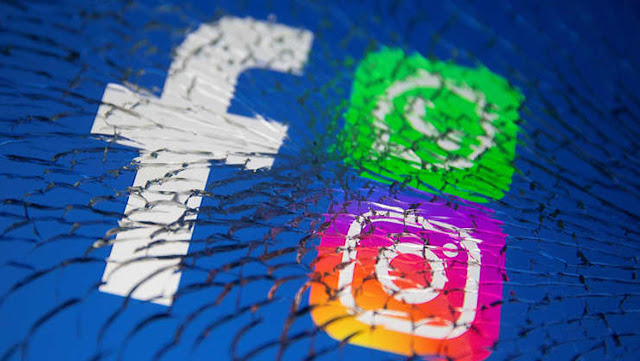 While the massive outage of Facebook and its subsidiaries Instagram and WhatsApp on Monday seemed bad, it's certainly not as big of a deal for the company than finding themselves under intensive governmental scrutiny for greater regulation of their content or even anti-trust rulings. Image by Dado Ruvic/Reuters.
The problem with Facebook is that everything they do runs through their own systems. Once their servers went down, there was no way to even begin to rectify the situation. There were no outside systems that were off the Facebook tool kit in place for a contingency like this one. Not only could they not log into their own now-vanished system to fix it; even the employees' key cards were coded to the same system so they physically couldn't get into the areas of the company where the repairs could be made. Hence, they were way more fucked than most companies in the same situation, and it took more than eight hours -- the longest downtime since Facebook was founded -- before their servers even seemed to exist on the Internet, and then more time before the content propagated around the world and it was functioning properly.
Is That True?
This whole scenario is embarrassing enough that it very well might be true. Per reports, it cost the company more than $50 billion in stock declines during that fateful day (which, of course, jumped right back up after the debacle). At the same time... it's bizarre that this happened the morning after a damning 60 Minutes whistleblower interview report about Facebook's "profit over ethics" policies came out (and the day of said whistleblower's testimony to Congress). It's not a big stretch to think that the timing of this massive outage was too bizarre to be coincidental, and that either a) it was done maliciously by someone inside or outside the company, or b) that Facebook themselves shut things down while cleaning up the evidence that would implicate them in some way. 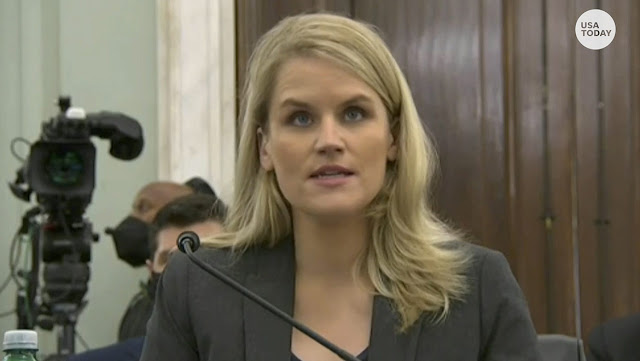 Facebook whistleblower Frances Haugen testifying before Congress on Monday. Photo by USA Today.
So is the "we're incompetent and our systems were designed with no contingency plans" excuse true? Yeah, probably. I have no way of knowing, and frankly I don't care. I use Facebook professionally for my marketing clients, for promoting my music, and in vain efforts to teach people about political and social/cultural things that probably affect them. If not for those reasons, the entire platform could fall off the face of the Earth, and I'd find suitable replacements to cover the very few areas where Facebook and its other brands are personally useful to me and are positive influences on the world.
Rocking the Alphabet
Let's get back to my show at Hotel Chelsea. I am trying to curate my recent shows so that they're not generic and interchangeable. Figuring out some kind of theme for my set has two advantages. First, it forces me to reach deeper into my repertoire and play things that I might not have automatically chosen. Second (and more importantly), it's a much more memorable and fun experience for my audience. It's only a matter of laziness (or, more accurately, simply not having the time) when I don't put together some kind of themed show for each and every performance. 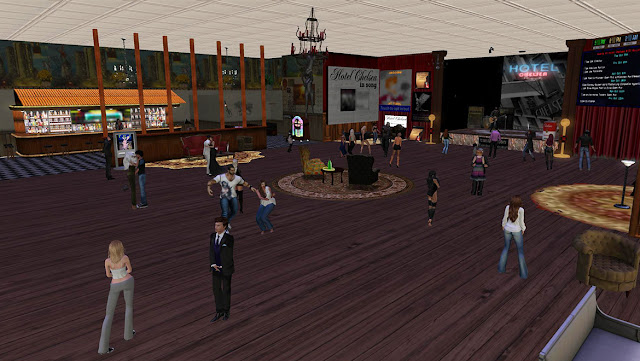 People having fun at my show. You know, I never care if people think of me as some extraordinary musical talent, or if they love every song I do. I only want them to have a good time for whatever reason they do. Photo by Kat.
For this one, while scrolling through my alphabetically-arranged list of song lyrics, I realized that it might be fun to not only do them in alphabetical order, but to select a song that represented each letter of the alphabet. So that's exactly what I did, per the set list below.
I had a request toward the end of the show to continue next time where I left off, meaning I'd have to come up with songs for the much more difficult N-Z section of the alphabet, but it sounds like a fun challenge and I think I'll plan for that at my next Hotel Chelsea show. 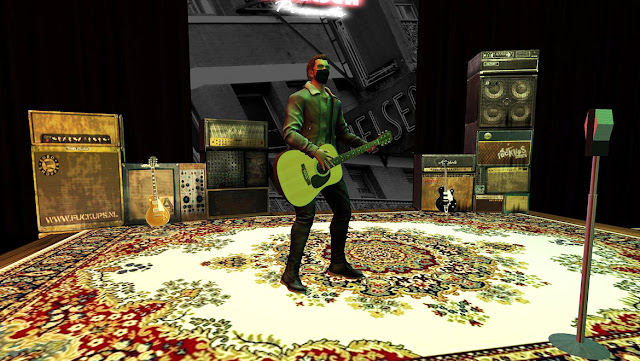 Me, rocking in my mask. A relevant side note: of my vaccinated friends who've still come down with breakthrough cases of COVID-19, a big percentage of them are live musicians doing real life shows, and not having the option to sing with a mask on. Photo by Kat.
Hotel Chelsea set list...
Accidents Will Happen (Elvis Costello)
Barely Breathing (Duncan Sheik)
Carolina In My Mind (James Taylor)
Don't Let It Bring You Down (Neil Young)
Everything Counts (Depeche Mode)
Fool on the Hill (Beatles)
Garter Snake (Macie Stewart)
Hannah Sun (Lomelda)
If You Could Only See (Tonic)
Just Like Heaven (The Cure)
Killing Me Softly (Roberta Flack)
Learning to Fly (Pink Floyd)
Mexican Radio (Wall of Voodoo)
Huge thanks to the folks who hung out at my show at Hotel Chelsea, and extra special thanks to those who helped support it!
Jeff Plumday, noowun Wind, GingerPandora Resident, Trouble Streeter, Kat Claxton, and Chelsea's great GM, Shyla the Super Gecko!
Posted by Zak Claxton at 10:40 AM