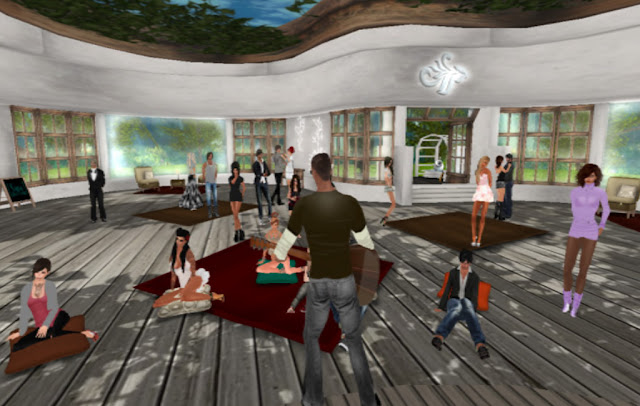 I don't know how many live music performances I've done in Second Life since I started back in 2006. Obviously, it's in the hundreds and hundreds. I do have a list that I could count, if it mattered to me (which it really doesn't). But I can say that there is one common element that distinguishes the very finest shows from the merely good ones. And no, it's not the music, and it's not the venue where I performed. What's left, then?

It's the people. As I look back through the years and those hundreds of shows, the one thing that makes certain performances be more memorable for their greatness is the random (and not-so-random) group of folks who gather for my shows, regardless of where they're held. For Tuesday's show at Serene Acoustic Lounge, I knew it was going to be incredible long before I started tuning my guitar that day. First and foremost, it's because Serene is run by my friend and fellow musician Sassy Nitely (aka Barbie Horsley). She doesn't use her venue all the time, and when she does, it's more of a showcase situation where she chooses from her personal favorite SL artists. As per her usual plan at Serene, Sassy did her show first on Tuesday night, and then was followed by me, and then by Jukebox Diesel. Here's an interesting coincidence (or is it?): I have performed either directly before or after Juke at each of my last four SL shows. He, by the way, is a great performer from the west of Scotland. Great repertoire, great playing, great voice. It's a pleasure to rock the same stages as him. 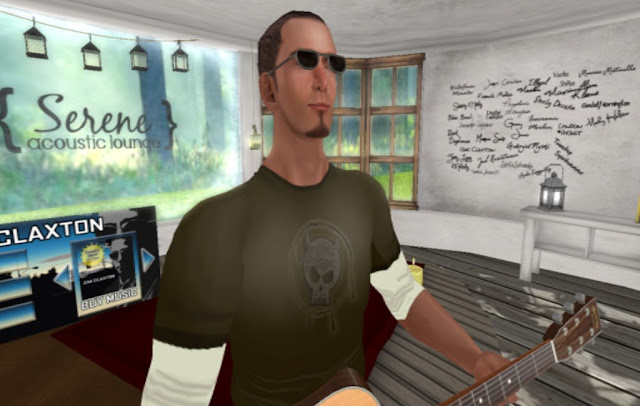 One thing I really like about Serene are the personal touches Sassy has added. I'm proud that my signature is there on that wall. Photo and top photo by Aurelie Chenaux. 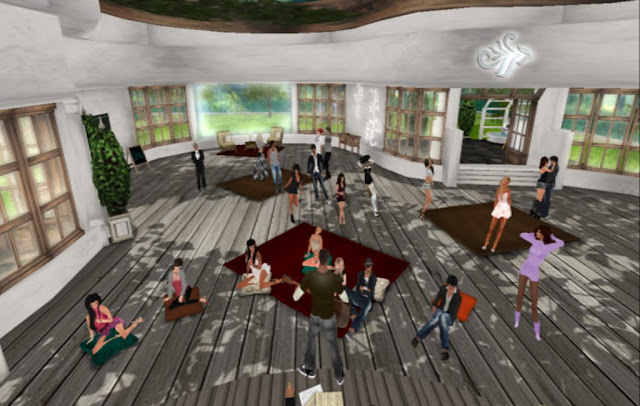 Serene is a great venue in that it's the perfect size and feel for intimate acoustic-style performances. The most common mistake that venue builders tend to make is that their places are way too big. Serene just feels like a great place to play some music and have fun with friends. Photo by Aurelie. 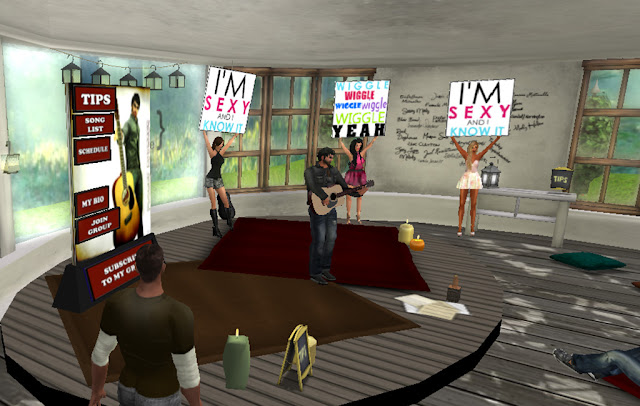 Alright, why haven't my Zakster ladies come up with any cute signs they hold up behind me when I perform? Here's Juke with a bevy of beauties.
I mentioned above that my show at Serene was scheduled for Tuesday evening, so my theme that night was "Two for Tuesday"... an old staple of FM rock radio where two songs are played in a row by the same artist/band. I think my set of "twofers" worked out well.

Big thanks to everyone who made this show at Serene Acoustic Lounge such great fun, especially everyone who supported my show!
Charyssi, Rusty Seisenbacher, Sandi Benelli, NeCole Chiantelle, Gideon McMillan, Christine Haiku, Sesh Kamachi, Aurelie Chenaux, BAT8997, Aaisy, TheaDee, my manager Maali Beck, my friend Jukebox Diesel, and most of all the lovely and talented Sassy Nitely!
Posted by Zak Claxton at 12:21 PM